BOOKREPORTER LOVES WON'T BACK DOWN! 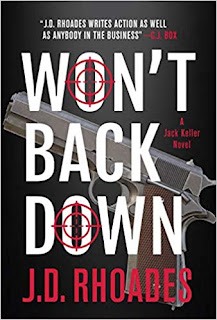 "Rhoades does an excellent job of bringing newcomers into the Keller fold so that thriller fans have no reason to ignore this memorable tale, which is one of the author’s (and this year’s) best works." 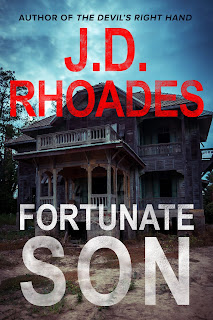 Do This One Thing For Me

Do this for me: name me one example of black people protesting racism in the last five years that the right or the Trumpkins has regarded as legitimate.
BLM chanting in the streets? "They're terrorists!"
NBA stars protesting the death of Eric Garner with "I can't breathe" t-shirts? "They should keep their mouths shut!"
Jemele Hill pointing out on her personal Twitter feed that Trump is a white supremacist? "a fireable offense!"

Colin Kaepernick taking a knee during the National Anthem? "Fire the son of a bitch!"

Stevie Wonder taking a knee at a concert? "Another ungrateful black millionaire!"

Face it, this isn't about the anthem, or the flag, or the military, or patriotism. This is fearful, guilt-wracked white people trying to win the argument about racism in America by the only way they can: making it illegitimate to have the discussion in the first place.
Posted by JD Rhoades at Wednesday, September 27, 2017 0 comments

Review: THE BAT, by Jo Nesbo

The trope of the tortured, alcoholic, obsessed homicide cop with a dark and terrible secret in his past has become so familiar as to elicit eye-rolling when I come across it again. But Jo Nesbo's first Harry Hole novel (although not the first released in the US) manages to rise above cliche. Harry is sent from the Oslo crime squad to sunny Australia to investigate the rape and murder of a Norwegian expatriate who was once a minor celebrity back home. There he encounters an Aboriginal police detective, a cross-dressing clown, and a winsome Swedish barmaid, among other interesting characters. Once revealed, the villain proves suitably chill-inducing, Harry battles the bottle as much as the killer, and all in all, it's a satisfying read. I've only read one other Hole novel, The Redbreast, which was frankly better than this. But this is still pretty good. Recommended.

The Sympathizer by Viet Thanh Nguyen
My rating: 5 of 5 stars

How many books do you know that win a Pulitzer Prize AND an Edgar Award for Best First Novel? I read about that and had to get this one. It did not disappoint.

On one level it's a spy story, but that's just one of the many layers to this book. It's also about national and racial identity, the warped reflection of those things in popular culture, The Vietnam War, love, loyalty, family...the list goes on and on, building to a tense climax that I found uncomfortably reminiscent of the darker passages that come late in Orwell's "1984." (There's even a rat, although not in a cage). Not sure I totally buy the book's denouement, but I'm still pondering that--which to me is the mark of a great book. It makes you think about it even when its done.

A fascinating, if occasionally slow-moving, account of the political and military campaigns that led up to the famous battle that established British naval supremacy for generations. It does bog down a bit in detail sometimes, especially in the descriptions of Napoleon's preparation for an all out cross-Channel invasion of England. The descriptions of the personalities involved, however, are vivid, and the account of the climactic battle itself is one of the best I've ever read. Highly recommended.