Actual Facebook screenshots from an acquaintance of ours (not "friended" on FB) griping that "Obamacare" was making her premium go up: 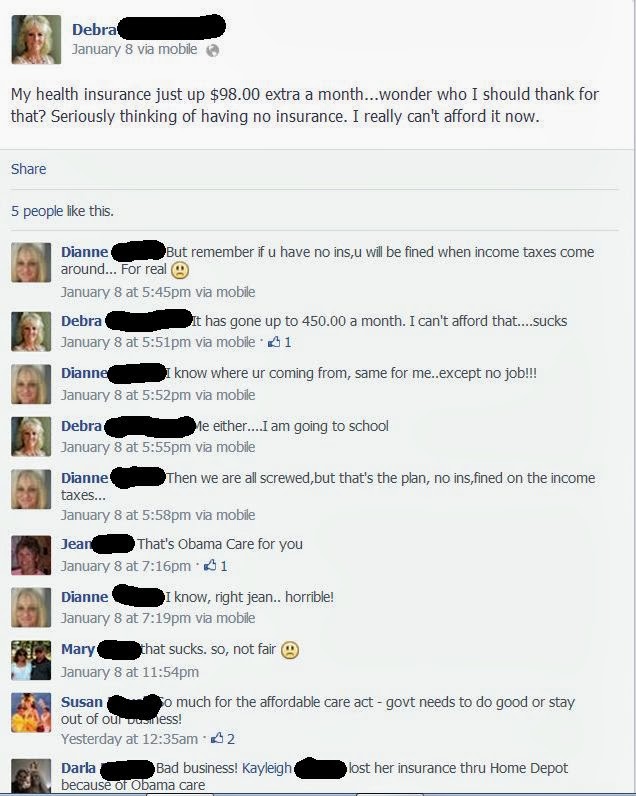 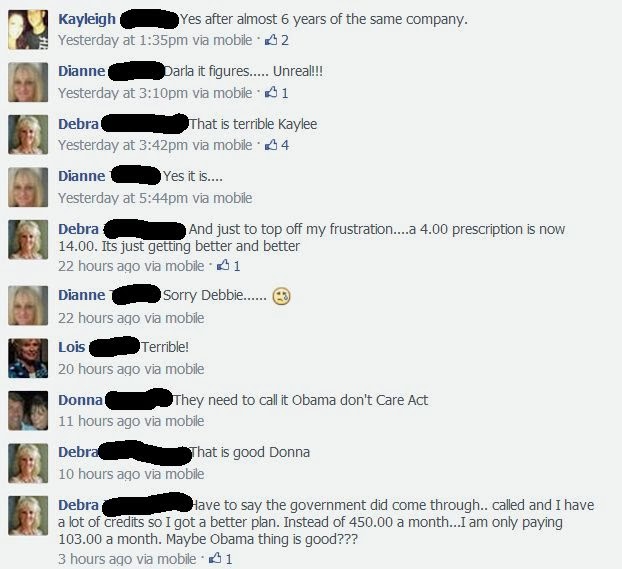 Email ThisBlogThis!Share to TwitterShare to FacebookShare to Pinterest
Labels: obamacare

You want to know why Health and Human Services Secretary Aldona Wos is doing a half-assed job administering Medicaid and food stamps? Because that's the way the Republicans want it. They don't like Medicaid, don't like food stamps and absolutely loathe poor people. So they screw up the programs they don't like, then try to blame Obamacare.
Posted by JD Rhoades at Thursday, January 16, 2014 0 comments

So now that the Iraq War is over, Rand Paul takes the courageous step of actually doing something to repeal the legal authorization for it. *slow sarcastic clap*.
Look here, you preppy asshole, I was against that war when some people regarded it as treason and weren't shy about telling me so. (My favorite was the e-mail warning me that "They hanged Benedict Arnold, you know," which managed to be both vaguely threatening and historically inaccurate). I wrote about what a bad idea it was to invade Iraq when it actually had fucking consequences, like my own father publicly stating in a letter to the local newspaper that people like me and my wife were responsible for 9/11. Fuck you, Rand Paul. Fuck you with a rusty fence post wrapped in barbed wire.
Posted by JD Rhoades at Tuesday, January 14, 2014 3 comments

Journalism Goes to the (Starving) Dogs


It seems that the speedy decline of the international news media is continuing at its accustomed pace, and may even be accelerating.
The latest example of sensational, shoddy journalism from people who should really know better came in the reporting about the execution of Jang Song Thaek, the uncle and political rival of bat-spit-crazy North Korean dictator Kim Jong-in.
As you probably remember, reports filtered through last month from that secretive country that Jang had been removed from all his party positions, expelled from the party itself, and jailed. In a move straight out of Orwell’s “1984,” his image was Photoshopped out of photos with other leaders and removed from all official media.
Then, on Dec. 13, the North Koreans officially announced that Jang had been executed for, among other things, “politically motivated ambition” and “obstructing the nation’s economic affairs.”
Then things started to get weird.
Since very little actual information makes it out from behind the veil of secrecy the Kim family has maintained around North Korea for years, the news media resorted to their usual technique of reporting rumors, harebrained speculation, and outright deranged fantasy to fill the information gap.
The New York Times reported that two members of Jang’s faction had been executed with heavy caliber anti-aircraft guns. Another story in the British press quoted unidentified “Japanese media” as saying the executions were carried out in such a gruesome fashion on the orders of a “very drunk” Kim.
Then, to cap it all off, American TV networks, including NBC and Fox News, reported that Jang had been executed by being “stripped naked, thrown into a cage, and eaten alive by a pack of ravenous dogs, according to a newspaper with close ties to China’s ruling Communist Party.”
The Singaporean newspaper the Straits Times expanded on the lurid details, saying that “120 hounds, starved for three days, were allowed to prey on [Jang and his compatriots] until they were completely eaten up.”
Am I the only one who read reports like this and went, “Now, wait just a gosh-darned minute here” (or some reasonable facsimile thereof)?
I mean, Baby Kim’s a homicidal loon, no mistake about it, but when I see something that reads like an account from a James Bond movie or one of those unexpurgated versions of Grimm’s Fairy Tales, I tend to get, shall we say, a little skeptical.
As it turns out, we skeptics were right. Reporter James Pearson of Reuters traced the “Jang was eaten by dogs” story all the way back to a Dec. 11 post on a Chinese satirical website called Tencent Weibo. It did not, in fact, come from any intelligence source, insider or actual witness. It was a joke, albeit a particularly odd one.
Perhaps there’s a lot in Chinese humor that gets lost in translation. Perhaps it’s also payback from the time a few years ago when the Chinese press printed a story from The Onion (”Kim Jong-un Named The Onion’s Sexiest Man Alive for 2012”) as truth.
The clue should have been when, as the NBC News website put it, “the story could not be independently confirmed.”
Now, I’m just a simple country lawyer, not a big-time famous print or broadcast journalist, but I seem to remember hearing about a day when, if a journalist couldn’t get independent confirmation of a big story from at least two sources, no editor would run with it.
But that day is not this day. These days, “independent confirmation” has been replaced with, “Well, I read it from someone who read it in another place who may have seen it on Twitter,” and so on, until there are no real sources or confirmation of anything anymore, just a bunch of credulous rubes on their laptops or iPhones, desperate to generate content and blindly repeating what someone else said he read on another website or Twitter feed, maybe adding a little embellishment before passing it on to the next sucker, each echo getting louder until there’s nothing but a full-throated chorus of total balderdash.
It’s journalism reduced to the level of middle school gossip, only louder and stupider, and it reaches its truest heights of absurdity when its original source is a joke repeated as truth by people who didn’t get it.
I’ve often said that the hardest part of writing satire these days is staying ahead of reality. It gets even harder when satire is breathlessly reported as reality by sensation-hungry media hucksters for whom some stories are, as the saying goes, “too good to fact-check.”


I suppose that’s also meant as a joke, but the end results are more grotesque than funny.
Posted by JD Rhoades at Sunday, January 12, 2014 0 comments