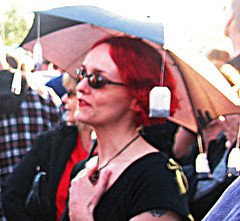 Seems the rightwing dolts over at Power Line have finally been clued in on the, ah, other meaning of "teabagging" and they have their panties in the usual wad over it:

There is not only something funny going on here, there is a story here. These supposed journalists and their networks (or publisher, in Sullivan's case) have rather seriously insulted the citizens who colorfully took to the streets to air respectable views in a most civil fashion. If they had any decency, Cooper et al. would apologize for their vile reference to sexual practices in the context of ordinary citizens exercising their First Amendment rights.

Note that these are the same sort of people who are all "hey, it was a joke, can't you take a little joke?" When Ann Coulter calls John Edwards a "faggot" or Rush Limbaugh cracks that Ted Kennedy will be dead before the health care bill passes. These are the same people who like to portray liberals as humorless and stuffy over "politically correct" language. It ain't so funny when you're the joke, is it, wingnuts? Well, here's your remedy...

STOP BEING A JOKE. ACT LIKE A SERIOUS POLITICAL PARTY INSTEAD OF A BUNCH OF CRANKS PROTESTING TAX "INCREASES" WHEN YOU PROBABLY GOT A TAX CUT. AND TAKE THOSE STUPID-ASS TEA BAGS OFF YOUR SILLY HATS.
Posted by JD Rhoades at Saturday, April 18, 2009 4 comments

The blogosphere is all-abuzz (And possibly a-Twitter, though I haven't checked) over Sarah Palin's speech in Indiana where she said she had "just for a fleeting moment" contemplated seeking an abortion after learning she was pregnant with her son Trig:

She was on a trip out of state at the time, she said, and "just for a fleeting moment I thought, 'No one knows me here; no one would ever know.' ... My amniocentesis came back and then I understood why some people would think they could change their circumstances, just take care of it. Todd didn't even know" the results of the prenatal testing yet, so "no one would know."

I actually think it's refreshing to hear one of these fundies confess in public that they've had a moment of doubt or that they've been tempted, because so many of them are so goddamn sanctimonious about everyone else's frailties. As we say down South, they act like their shit don't stink.

I may not ever like Governor Palin (unless she apologizes for all that exclusionary and divisive "real America" crap) but I respect her honesty in this situation. Further, I respect her choice.

Now, Governor, take the next step, and admit that you had a choice, so so should other women. And respect their choices, just as you ask us to respect yours. How's that sound?

One Born Every Minute

I can't believe I missed this when it first ran, but here's the story:

A poster over at Daily Kos named Bamos crated a fake Twitter account called In the Stimulus, where he/she posted all sorts of outrageous bullshit alleged to be part of the stimulus package. They started off as, in Bamos' words, "believable but unsourced lies," such as
The wingnuts ate it up. So Bam got crazier:

My personal favorite: "$2 million for Shamwows."

I guess it shouldn't be surprising that they got so easily punk'd. These are, after all, the people who still buy George Dubbya Bush's snake oil by the family sized barrel, not to mention buying into the notion that the Wassilla Hillbilly was some kind of political heavyweight.

And to be fair, as we'll see in Sunday's newspaper column, it's not just the Right who're susceptible to Twitter-driven outrage. They're just the ones who're most susceptible to mistaking bullshit for reality.
Posted by JD Rhoades at Friday, April 17, 2009 3 comments

Email ThisBlogThis!Share to TwitterShare to FacebookShare to Pinterest
Labels: dumb and proud

Gov. Rick Perry on Thursday stuck by his earlier statement that Texas can secede from the United States — a far-reaching, legally questionable prospect that nevertheless drew Perry a fresh favorable mention by Rush Limbaugh, one of the nation's leading conservative voices.
I hate to sound like a broken record here, but what do you think would be happening right now if a liberal Democratic governor--say, Howard Dean--had suggested that his state could secede from the Union in a fit of pique over a Republican President's policies, and a liberal radio host--say, Randi Rhodes--had backed him on it? Calls for him to step down and for her to be taken off the air, almost certainly. And they'd both be regarded as a "kooks" by the mainstream media. And I have no doubt that some right wingers, like Ann Coulter and Michelle Malkin, would be demanding they be locked up or executed as traitors. I mean, "traitor" was probably the kindest thing the wingnuts said about Alec Baldwin and all he did was threaten to move HIMSELF out of the country.
But when you're a Republican, none dare call it treason, I guess. Then, it's "grassroots protest."
Posted by JD Rhoades at Friday, April 17, 2009 10 comments

Email ThisBlogThis!Share to TwitterShare to FacebookShare to Pinterest
Labels: IOKIYAR

Today at Murderati, I ask the question: are zombies the new vampires?
Posted by JD Rhoades at Wednesday, April 15, 2009 1 comments

The man's channeling Stephen Colbert or something:
*FTW=For The Win!
And if you're confused as to why the whole "teabagging" thing makes us giggle...well, Google it.
And just remember: if you're teabagging across the country, you're gonna need a Dick Armey!
Stupid and industrious indeed.
Posted by JD Rhoades at Tuesday, April 14, 2009 4 comments

(Not necessarily political, but it does, of course, have application to politics):
"I divide my officers into four classes; the clever, the lazy, the industrious, and the stupid. Each officer possesses at least two of these qualities. Those who are clever and industrious are fitted for the highest staff appointments. Use can be made of those who are stupid and lazy. The man who is clever and lazy however is for the very highest command; he has the temperament and nerves to deal with all situations. But whoever is stupid and industrious is a menace and must be removed immediately!"
-General Kurt von Hammerstein-Equord
Posted by JD Rhoades at Tuesday, April 14, 2009 0 comments