My sci-fi vampire revenge epic, titled MONSTER: NIGHTRIDER'S VENGEANCE, releases May 1st. I'll send a free Kindle or EPub copy to the first 20 people, not related to me by blood or marriage, who e-mail me at dustyr@nc.rr.com and put MONSTER in the subject line. In exchange, you agree to post an honest review when (or within a reasonable time after) it's released. Reviews can be on Amazon, B & N, blog, wherever, but they must be honest. Specify mobi (Kindle) or Epub format, and if you want me to send it direct to your device give me the address (e.g. mykindle@kindle.com), and remember to set dustyr@nc.rr.com as an address you can get files from.
Posted by JD Rhoades at Monday, April 23, 2012 0 comments 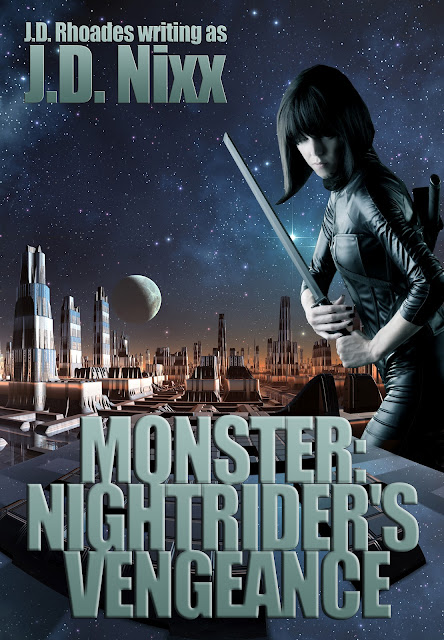 This is the cover for my upcoming e-book (the long-awaited sci-fi vampire revenge epic), by the multi-talented David Terrenoire. I like it a lot, hope you do too.
Posted by JD Rhoades at Monday, April 23, 2012 6 comments

The Chairborne Rangers of the Right Wing: Pushing Barbarism

You know, I've never been to Afghanistan. I've never been in a firefight anywhere, although I have had a gun pointed at me, which is as close as I care to come, thank you very much.
But from some of the reporting coming out of there - such as Sebastian Junger's harrowing book "War" and the accompanying documentary "Restrepo" - Afghanistan is to stress, fear and paranoia what Mount Everest is to rock formations. And it seems like we can't go a month now without hearing about some of our soldiers (almost all of whom have been through multiple deployments) who have completely lost it under the stress.
From the Marine snipers photographed urinating on enemy corpses to the soldier who walked out of camp one night and started slaughtering civilians to the recently released photos of American troops posing with body parts and corpses, it's just one image after another that makes you wonder if maybe we've finally stressed our military past its breaking point.
Now, desecrating the bodies of fallen enemies is not a new phenomenon by any means. In "The Iliad," Homer describes how Achilles, maddened with grief by the death of his best friend, Patroclus, killed Hector, the Trojan crown prince responsible, then desecrated Hector's body by dragging it behind his chariot for nine days during Patroclus' funeral feast.
In the 15th century, the Wallachian prince known as Vlad the Impaler (later the inspiration for the blood-drinking Count Dracula) became well known for desecrating the bodies of vanquished enemies, mainly by sticking the bodies (and more than a few live prisoners) onto pointed stakes and leaving them for the invading Turks to find.
In the harrowing World War II memoir "With the Old Breed," Marine John Sledge describes the mutilation of American corpses by the Japanese on the islands of Peleliu and Okinawa - and the corresponding looting (particularly of gold teeth) and taking of other "trophies" from dead Japanese by our own people. And so on.
What does seem to be new is the idea, particularly among the right, that this is either (a) no big deal or (b) actually a good thing.
Homer describes how Achilles repented from his act and returned Hector's body after being confronted by Hector's weeping father, King Priam, not to mention getting a stern warning from Zeus himself that he was "tempting the wrath of heaven" by his act of disrespect to a dead enemy.
Sledge describes how he was dissuaded from the act of stealing the gold teeth from a dead Japanese soldier by his friend, corpsman "Doc" Caswell, who admonishes him, "You don't want to do that. What would your folks think?" And Vlad ... well, as noted above, his major claim to fame is as the inspiration for one of literature's greatest monsters.
In contrast, when those pictures surfaced of Marine snipers urinating on dead Taliban fighters, conservative radio host Dana Loesch turned gushing fangirl: "I'd drop trou and do it too. That's me, though. I want a million cool points for these guys." Anti-Muslim blogger Pamela Geller tweeted, "I don't CAIR that these Marines wee wee'ed on murderous savages" (CAIR being the acronym for one of Geller's favorite bogeymen, the Council on American Islamic Relations).
Fox commentator Ralph Peters went on the air nearly apoplectic with rage about how the recent photos of soldiers with dead and dismembered enemies were being used by people - including, according to Peters, their own commanders - to "trash our troops."
I look at those images of young Americans, truly our best and brightest, behaving this way, and my heart breaks for them. I don't know if they'll ever make it back to sanity from that. I don't know if any person could.
Then I think of the passage from Sledge's book where he talks about Doc Caswell, the man who dissuaded him from desecrating enemy bodies: "He was a good friend and a fine, genuine person whose sensitivity hadn't been crushed out by the war. He was merely trying to help me retain some of mine and not become completely callous and harsh."
I compare that with the "callous and harsh" and downright barbaric statements from some of the Chairborne Rangers of 24-hour news TV and I wonder if we, as a country, will ever make it back from the abyss they're pushing us toward.
Posted by JD Rhoades at Sunday, April 22, 2012 6 comments