DEAD OF WINTER: Homicide For The Holidays

Recently I've joined a cadre of several of my favorite authors under the name of the Thalia Press Author's Co-Op. We're helping each other get our backlists up as e-books, and promoting new, independently published material as well. We've got a group project coming up called DEAD OF WINTER, featuring new, winter themed short stories by Chaz McGee (aka Katy Munger), Gary Phillips, Sarah Shaber, and others. 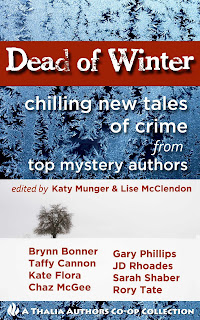 My own contribution, "I'll Be Home For Christmas," features Gibson County Chief Deputy Tim Buckthorn, who was one of my favorite characters in my critically acclaimed novel BREAKING COVER. My friend David Terrenoire observed once that the book was as much Buckthorn's story as it was Tony Wolf's, and he was right. I've been wanting to use Tim in a story for a while, and this was my chance.

The book's tentatively set for release on November 15th...I'll keep you posted.
Posted by JD Rhoades at Wednesday, November 02, 2011 0 comments

Tomorrow is Halloween, the time when we think about ghosties, ghoulies, and various things that go bump in the night. So it seems an appropriate time to discuss the Zombie Renaissance.
Seems like there’s never been a better time to be a creator of zombie-related art and entertainment. The website 24/7 Wall Street estimates that “today’s zombie-genre economy,” as they put it, is worth up to $5 billion.
First and foremost, of course, there are the movies. Starting with the shambling, rotting grandaddy of them all, “Night of the Living Dead,” all the way though films like “28 Days Later,” its sequel “28 Weeks Later,” the seemingly unkillable “Resident Evil” franchise, the Will Smith vehicle “I Am Legend” (which substituted fast-moving, rage-filled zombies for the vampires in the original novel), the hilarious spoofs “Shaun of the Dead” and “Zombieland,” and the upcoming “World War Z,” starring Brad Pitt, it seems that the undead make for great box office.
Then there are things like video games (the recent smash hit shoot-em up “Call of Duty: Black Ops” comes with a mode where the player battles Nazi zombies); TV shows (AMC’s “The Walking Dead” has just been picked up for a third season); comic books; and even novels such as “Pride and Prejudice and Zombies,” which takes Jane Austen’s classic novel and updates it with a few ghouls (as an Austen-loving friend of mine puts it, that’s just so wrong).

Some people jump on the zombie bandwagon through so-called “zombie walks,” in which crowds of people make themselves up as zombies and lurch, moan and chomp their way through cities and towns, all in good fun and sometimes for charity.
The first recorded walk occurred in 2001 in Sacramento to promote a horror film festival, but the idea quickly spread like — well, like a zombie plague. Now cities compete for the record of biggest walk, with the current crown held by Asbury Park, N.J., which recorded an invasion of 5,000 rotters and secured a place for itself in “The Guinness Book of World Records.”
Dublin, Ireland, claimed a turnout of 8,000 for the one they held July 23 of this year, but Guinness has not yet confirmed the number, possibly because of the difficulty of sorting out whether a pale person staggering through the streets of Dublin and muttering incoherently is a wannabe zombie or just a drunk on his way home from the pub.
Which raises the question: Why are the walking dead such a hot item these days? I mean, I love a good zombie story as much as the next guy, but even I have trouble explaining why zombies seem to be replacing vampires as everyone’s favorite undead.
I can almost see the appeal of the vampire thing. There’s a certain sexiness about vampires, or so the fans tell me. They’re beautiful, their hunger equates with great passion, they bite your neck — hey, it’s not my kink, but whatever floats your boat. But it’s hard to envision a best-selling book and movie series about a forbidden romance between a beautiful but awkward teenage girl and a mindless, flesh-eating ghoul.
Maybe it’s because zombies embody something we all recognize deep down, something that’s definitely on the rise these days. As my friend Stephen Blackmoore, author of the upcoming zombie novel “City of the Lost,” once put it: “Zombies aren’t terror, they’re dread. They’re the physical embodiment of anxiety.” Which may be why they’ve gotten so much more popular in these anxious times.
On the flipside, though, zombies are kind of goofy, with their blank expressions, their clumsy shuffle, the bits falling off. They’re funny in a sick kind of way. They take that anxiety and make it into something you can laugh at. If you can laugh at it, it’s not so scary.
And that’s what Halloween is all about, Charlie Brown.

(click the pic for hints on surviving a zombie plague. Because you just never know.)
Posted by JD Rhoades at Sunday, October 30, 2011 3 comments