Not only is Ken Bruen's BLITZ coming to the big screen but Jason Statham's playing Brant.

I'd always seen Bob Hoskins or maybe Ben Kingsley in the role, but they're getting some age on them, and Statham's a solid choice.

I am extremely happy about this. Ken's an amazing writer and a great guy, and I would love to see him get the recognition he deserves AND get absolutely filthy stinking rich. This might do it.

The more I think about it, the more this theory that Sarah Palin is stepping down to run for President just doesn't fit. If she was going to do that, one would think it would be better to go out on a high note. And Governor Palin has not, to put it mildly, had a great few weeks. There was a Vanity Fair article that came out in which she was roundly dissed by McCain staffers; several e-mails were released in which she seemed to be lying about the First Dude's involvement with the secessionist Alaska Independence Party and demanding that the campaign do the same; Alaska's state health director resigned, claiming Palin forced her out over social issues; and then there was that stupid feud with David Letterman which, in the final analysis, made her supporters look like a pack of loons and probably hurt Palin more than it did Letterman.

Also, if an announcement was meant to be the springboard for an expanded national presence, one would think that you wouldn't make said announcement on the Friday before a big Federal holiday, which is when you traditionally deliver bad news that you hope gets buried.

No, this doesn't smell like the beginning of a triumphal march. This smells like getting the hell out of Dodge before the sheriff rides in.

Of course, Caribou Barbie hasn't exactly shown herself to be a political genius when it comes to timing. After all, she apparently decided that, at a time when people were scared to death over their financial futures, the smart thing to talk about was what Bill Ayers did in the 60's and who was a "Real American." So for all I know, she may think this is the PERFECT time to bail out of Alaska and hit the campaign trail for 2012.

We also have to consider, though, that Bill Kristol just said of the resignation: "If I had to bet right now, I would bet that we just heard the first opening statement in the 2012 presidential race." And, as all thinking people know, that grinning idiot is always wrong.

UPDATE: I have now seen the video of her resignation speech.

John Cole is right: this is "rambling and disjointed even by Palin’s low standards." There is something seriously weird going on.
Posted by JD Rhoades at Friday, July 03, 2009 6 comments

Palin, the Republican vice presidential candidate in 2008, made the announcement at her home Friday morning, the station said.

Lt. Gov. Sean Parnell will take over at the end of the month, KTUU reported.

There was no immediate word as to why she will step down before the end of her first term, though some have speculated in the past that she may be interested in running for president in 2012.

Because destroying a Republican Senator's Presidential campaign through a mind-boggling combination of ignorance, incompetence and arrogance, then cutting and running before her first term is over, is the perfect springboard to the White House.

Not much I can add to the awesomeness of that.
Posted by JD Rhoades at Thursday, July 02, 2009 1 comments

Asked if he has plans to run for public office, he replied, “I hope not. You know, I talked to God about that and he was like, ‘No.’”

Apparently, God doesn't want me to have any fun at all. 'Cause old Joe is a comedy goldmine. He makes Michelle Bachmann look like a stateswoman.

Email ThisBlogThis!Share to TwitterShare to FacebookShare to Pinterest
Labels: Joe the Not-Plumber

Coleman concedes, after the Minnesota Supreme Court unanimously rejected each of Coleman's five legal arguments that an earlier recount of the November 4 vote had been unfair.

Ol' Rush Limbaugh's gonna need the giant family size bottle of Oxycontin tonight. 'Cause here's a news flash for all you wingnuts who love to moan and groan and stomp your widdle feet about "libruls" in the Senate: Franken is the real deal, not one of these Republican Lite assholes who already give you conniptions. You are about to see what a liberal Senator REALLY looks like.

Yeah, Brother, I Been There.

I took Norton AV off the laptop about a week ago and installed avast! which is free and which so far works great. The computer now boots up in half the time, runs faster, and doesn't heat up nearly as badly.

Norton: The anti-virus software that acts like a virus!

And don't even get me started on McAfee, which refused to install an update on my home machine because I also had Spybot S & D installed. So McAfee (which has often missed stuff that Spybot caught) gets kicked to the curb as well.
Posted by JD Rhoades at Tuesday, June 30, 2009 8 comments

How Could This Situation Possibly Go Wrong? 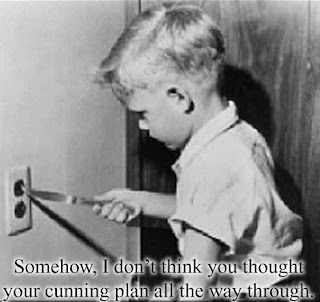 The story in a nutshell: Acclaimed writer Alice Hoffman wrote a book. Critic Roberta Silman was disappointed in it and said so in the Boston Globe. Alice Hoffman went completely apeshit on Twitter, even publishing Silman's phone number and e-mail address and inviting readers to call Silman and "tell her what you think of snarky critics."
Oh, good plan, Alice, good plan! I'm sure a retraction is coming from the Boston Globe in the very next edition, followed immediately by the sacking of the egregious Ms. Silman. And everybody's bound to come to your defense, right?

Hey, I completely understand the impulse, believe me. I've gotten reviews that make me want to go upside the reviewer's head. But no good can come of it. Just as no good came of Hoffman's tantrum. Her Twitter account is gone (which is probably just as well) and it's not Silman writers are lambasting.

But you, know, there but for the grace of God...and what remains of my good sense...

My Health Care Challenge to Congress

It looks like the next big debate to heat up in Congress is going to be over health-care reform.

Part of the proposed solution involves what's known as the "public option": a government health-care plan that would be open to anyone. People and employers would still be free to buy private health insurance if they want.

But for some, the very idea of giving people the option to buy public health insurance evokes dire prophecies of doom. An editorial in the Wall Street Journal fumed that "like Medicare and Medicaid, the Obama Public Option in time will become an impossible fog for patients to navigate."

Republican Sen. Jim DeMint assures us that the public option will drive private insurers out of business: "Government never competes in a private market; it takes the market over." Honorable John McCain agreed, telling CNN: "Look, if we have a government option, then sooner or later ... it will crowd out private health insurance."

So let me get this straight. Publicly funded health care, even as an option, is poorly run, inefficient and will lead to rationing of health care -- but private health insurers can't compete with it? Tells you something about the state of private insurers, doesn't it?

By the way, when it comes to rationing of health care, I've got news for you: We have that now. It's just that the rationing is now done by insurance companies who decide whether treatments are too expensive and how long you're allowed to stay in the hospital. And of course, if you're uninsured, your health care is rationed even more severely: You've got the ER for when you collapse, but other than that -- too bad, you're out of luck.

But, you say, everybody knows that a system purporting to provide universal health care doesn't work. Just ask Austria, Australia, Belgium, Denmark, Finland, France, Germany, Greece, Iceland, Ireland, Italy, Japan, Luxembourg, The Netherlands, Norway, Portugal, Spain, Sweden, or Switzerland. Except ... wait, all of those countries have something that wingnuts would decry as "socialized medicine." It's amazing there's anyone still alive there.

On the other hand, I saw a commercial from some health insurance company that said the socialized medicine system in Great Britain has some problems, so it must not work anywhere. We should probably just give up.

It's also ironic that the people who are most insistent that government-sponsored and government-run health care won't work are lawmakers who are themselves on a health-care plan paid for by taxpayers and run by the government, through the Office of Personnel Management. Their attitude seems to be, "Government health care for me and not for thee."

So here's my challenge, senators: You think private-sector health insurance is so keen, go off your congressional health plan. Go out there, with your government salary, ring up Blue Cross/Blue shield or CIGNA or Kaiser Permanente or whichever one you decide is more competitive. Try to get a price quote. Pray that you don't have something they'd regard as a "pre-existing condition."

Be very careful in filling out your health history, because as one former CIGNA exec put it this week, before Congress, under oath: "They look carefully to see if a sick policyholder may have omitted a minor illness, a pre-existing condition, when applying for coverage, and then they use that as justification to cancel the policy, even if the enrollee has never missed a premium payment."

In earlier testimony, executives from other health insurers refused to consider the idea that coverage should be dropped only for "willful and intentional" fraud and asserted their God-given right to drop coverage for the sickest Americans for even inadvertent or minor errors on their application.

So go ahead, senators. Buy your own "competitive" health-care plan for you, your families, and while we're at it, your staff. Then try to keep it if anyone gets sick.