It’s pretty much accepted wisdom at this point that, in order to succeed on a national level, the Republican Party is going to have to broaden its appeal.

So what are conservative Republicans doing to expand their appeal on the national level?

Well, you have Phyllis Schlafly of the right-wing Eagle Forum going on conservative radio and explaining that it’s useless to try to reach out to Latinos because they don’t “have any Republican inclinations at all,” and “they’re running an illegitimacy rate that’s just about the same as the blacks are.”

Further, she said, Latinos “come from a country where they have no experience with limited government. And the types of rights we have in the Bill of Rights, they don’t understand that at all. You can’t even talk to them about what the Republican principle is.”

Perhaps someone can explain to Mrs. Schlafly, first off, that Latinos don’t come from “a country.” There is no country called Latinostan. Also, they can explain to her that insulting, en masse, the fastest-growing voting group in the U.S. is the path to political extinction.

Meanwhile, Texas Congressman Louie Gohmert (R-Off His Meds) defended his opposition to immigration reform and asserted that Latinos won’t punish the GOP at the ballot box with this gem: “I think you will see people start waking up and go, ‘Wow, I’m Hispanic and these Republicans really like me. … Wow, this Republican really does want me to do well. That’s the party I ought to be in!”

Yeah, Louie, let me know how that condescending and paternalistic attitude works out for you. Of course, this is the guy who once berated the attorney general for casting “aspersions on his asparagus,” much to the confusion of all in the hearing room, so maybe he’s jockeying for Michele Bachmann’s soon-to-be-vacant position as Head Loony of the Republican Caucus.

Don’t worry, ladies — the Republican Party hasn’t forgotten you! Rep. Trent Franks (R-Ariz., of course) recently demonstrated, once again, the GOP’s ignorance of female anatomy by confidently asserting that exceptions from abortion restrictions in case of rape are unnecessary because such pregnancies are “rare.” He apparently forgot that ignorant BS like that cost the GOP a Senate seat less than a year ago.

During the recent debacle in Texas, where the legislature came back especially to pass a restrictive abortion law, Republican legislator Jodie Lautenberg struck a blow for gender equality in the area of ignorance by claiming that emergency rooms have “rape kits” that “clean women out” (for the record, the rape kits are for collecting criminal evidence). Scottie Nell Hughes, director of the Tea Party News Network, went on TV saying that rape victims who end resulting pregnancies should serve the same jail time as their rapists. And the beat goes on.

Of course, there are some who say that there’s no need for outreach, that “angry white guys” are enough to carry them to the White House and control of the Senate. I invite those people to compare and contrast a pair of events that happened right here this past week in North Carolina. They are the latest “Moral Monday” protest on the Halifax Mall behind the General Assembly building and the “Thankful Tuesday” counter-demonstration the next evening.According to The News & Observer, the police estimated 2,000 attendees at the Moral Monday protest. Organizers pegged the number at closer to 5,000. The Tuesday protest, on the other hand, drew a mere 200 people, holding signs that said, “Stop Abortion Now,” and “Thank you [Gov. Pat] McCrory.”

So, even using the lowest estimate, 10 times as many people turned out to protest the General Assembly’s current path as turned out to support it. And the pictures from the event really tell the tale: The Moral Monday folks are a strikingly diverse group, of all ages and races. The TT’s … not so much. They are, shall we say, ethnically homogenous, and not one of them looks younger than 60.

Of course, the generally low turnout for TT may be because right now even a lot of sane Republicans are getting disgusted with the General Assembly’s full-steam-ahead efforts to enact a radical right-wing social agenda at the expense of little details like a state budget.

Maybe they’d get better turnout if they called for a “Stop Futzing Around and Pass a Budget Already Tuesday.” Granted, it doesn’t roll as trippingly off the tongue, but I think it accurately sums up the frustration I’m hearing from Republican friends of the non-insane variety.  I know the GOP isn’t listening to me, but maybe it could listen to them.
Posted by JD Rhoades at Saturday, July 20, 2013 3 comments

The Pictures Tell The Tale Here In NC 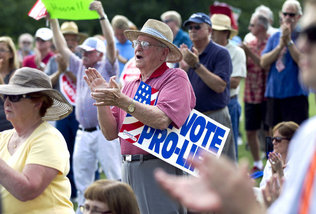 "A crowd of about 200 hollered and cheered. They waved signs that bore messages Halifax Mall isn’t used to seeing on Mondays: “Stop abortion now,” and “Thank you McCrory.”

The turnout for the last Moral Monday? 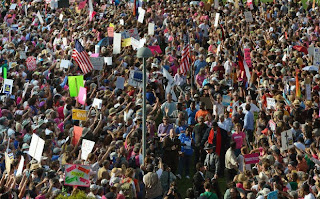 Police estimate 2,000, organizers say 5,000, even the most conservative estimates put the Moral Monday crowd at 10 times the size of the tiny, ethnically homogenous,  aging supporters of our ridiculous General Assembly.

You are seeing the future, right here.

Email ThisBlogThis!Share to TwitterShare to FacebookShare to Pinterest
Labels: wingnutdammerung

Your Humble Blogger is interviewed by the lovely and talented J.F. Penn:


Those of you who aren’t science fiction geeks have probably never heard of Orson Scott Card. But those of us who love stories of possible futures and pasts that never were, he’s one of the legends. He’s won the Hugo, the Nebula, the Locus and a slew of other awards.

One of his best-known novels is the classic “Ender’s Game,” the story of a young boy being turned into a killer in a brutal orbital boot camp set up to train child soldiers to fight an alien enemy. It’s a great book, a real-page turner. It’s complex and dark and shocking and thought-provoking, with an ending that makes you go “Whoa. I did not see that coming.” Card is a truly gifted writer. A master of the craft.

Card has written extensively against homosexuality and same-sex marriage, even going so far as to suggest that legalization of same-sex marriage would be sufficient justification for armed overthrow of the government.

“Regardless of law, marriage has only one definition, and any government that attempts to change it is my mortal enemy,” he wrote. “I will act to destroy that government and bring it down, so it can be replaced with a government that will respect and support marriage, and help me raise my children in a society where they will expect to marry in their turn.”

He’s claimed that “the dark secret of homosexual society — the one that dares not speak its name — is how many homosexuals first entered into that world through a disturbing seduction or rape or molestation or abuse, and how many of them yearn to get out of the homosexual community and live normally.”

One wonders how Mr. Card knows the “dark secret of homosexual society,” but we’ll leave that aside for the moment. Lately, however, there was some evidence that Mr. Card has come around — or has he?

He wrote a piece that appeared in Entertainment Weekly, in which he stated that the recent Supreme Court decision on the Defense of Marriage Act has rendered the gay-marriage issue “moot.” He said, “The Full Faith and Credit clause of the Constitution will, sooner or later, give legal force in every state to any marriage contract recognized by any other state.”

So far, so good, and probably legally correct. But he went on to say: “Now it will be interesting to see whether the victorious proponents of gay marriage will show tolerance toward those who disagreed with them when the issue was still in dispute.”

Well, I have good news for you, Mr. Card. I’m reasonably sure that there won’t be a French Revolution style Reign of Terror against you and people who think like you. No guillotines, no tribunals.

I’m even willing to bet that there won’t be any kind of movement to deny you and your beloved the things you’d deny to same-sex couples — everyday things such as being able to cover your spouse on your health plan, pay hospital visits as a matter of right, be considered next of kin for health care decisions, inherit without a will, etc.

You get to keep doing all that stuff. You don’t have to get divorced and gay married now, and your children can still “expect to marry in their turn.” And you can still write whatever you want. Feel better?

As it turns out, though, that’s really not what Mr. Card means when he talks about “tolerance.”

See, “Ender’s Game” is being released as a movie, and there are some pro-marriage-equality groups who have put forth the proposition that since this Card fellow has spent a great deal of time, creative energy, and money supporting causes that directly oppose interests vital to their well-being, maybe they shouldn’t help support him with their own hard-earned shekels by paying for tickets to see the movie.

I can see their point, although I personally have always been of the opinion that the artist’s work should be judged on its own. Let’s face it — there have been some artists who have done great works despite being generally awful people.

The brilliant poet Ezra Pound was a Fascist and a Nazi collaborator. Jackson Pollock was a wife-beating drunk. And so on. But I don’t boycott them. Of course, those artists have the advantage of being dead, so I don’t have to worry about the money I spend enjoying their art being used against the interests of people I care about.

So will I go see “Ender’s Game: The Movie”? I don’t know. I still haven’t made up my mind. But I certainly won’t blame those who make the choice not to help the career of someone who’s worked, written, and spent money to deny them the things they hold dear.

“Tolerance” doesn’t require people to help pay for the shine on the boot that’s been kicking them.
Posted by JD Rhoades at Sunday, July 14, 2013 9 comments