A little tune celebrating our ranking among the countries of the world in terms of health care, according to the World Health Organization.

That's What I've Been Trying to Tell You 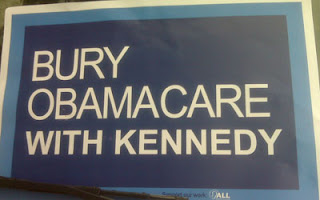 The Party of Love continues to show its class with signs like this one at a "9/12" Teabagger event.

Mark McKinnon, a former adviser to Sen. John McCain (Ariz.) and other Republicans, said there is an "opportunity for Republicans" to tap into legitimate fears about an overreaching federal government. But he said that "right-wing nutballs are aligning themselves with these movements" and are dominating media coverage.

"It's bad for Republicans because in the absence of any real leadership, the freaks fill the void and define the party," McKinnon said.

Sorry, Mark, that horse has gone and left the barn a while ago. Oh, sure, the Democrats have their share of nutballs and crazy conspiracy theorists. Cynthia McKinney comes immediately to mind.

But they don't let them run the damn party.

Email ThisBlogThis!Share to TwitterShare to FacebookShare to Pinterest
Labels: batshit raving, teabaggers, The Party of Love

I got to get me one of these:

The Associated Press: Obama heckled by GOP during speech to Congress


WASHINGTON — The nastiness of August reached from the nation's town halls into the U.S. Capitol on Wednesday as President Barack Obama tried to move his health care plan forward.

Does anyone remember any Democratic lawmaker ever shouting "Liar!" at George Dubbya Bush during a speech to a joint session? Even when he was lying through his teeth? I don't.

But never forget, it's Democrats who are filled with hate.

Email ThisBlogThis!Share to TwitterShare to FacebookShare to Pinterest
Labels: GOP bullshit, The Party of Love

How Hard Can It Be? Or, How I Got Myself Into This Mess

Over at BookPage.com, I and several other authors answer the question: when did you first realize you wanted to be a writer?

Thanks to Tom Robinson for inviting me!

I've written before in this column about a mental disorder which I've dubbed SWORS -- Spasmodic Wingnut Outrage Syndrome.

In case you've forgotten, SWORS is a disorder of the central nervous system that causes impairment of higher brain function in some American conservatives. Sufferers from SWORS experience a near-total loss of any sense of proportion and become prone to manic outbursts of indignation and outright paranoia over the smallest subjects.

Subjects such as the "hold music" on the congressional phone system.

We all know about "hold music": the tunes (usually instrumental) that play incessantly in your ear while you're waiting for the person you called to pick up or, more often, for their secretary to tell you they're out while they finish their game of Solitaire on the company computers.

Hold music varies widely. Some offices play country. Some play classical. Most play the treacly, string-heavy stuff known derisively as "elevator music." Some don't play music at all, but instead run peppy, annoying little ads to tell you how great the company you're calling is, and how important your call is to them, only apparently it's not important enough for a real, breathing, human person to actually, you know, PICK UP THE FLIPPIN' PHONE...

Sorry, I got carried away there for a minute.

For years, it seems, the U.S. Congress' phone system has had "patriotic" music as its hold music. A few days ago, however, the House's chief administrative officer, or CAO, a fellow named Daniel Beard, decided to test a new system whereby various Congress members could choose their music. The CD or tape or whatever that they decided to test the program with was one of "smooth jazz."

I'm no fan of the whole "smooth jazz" genre either, but I don't get all heated up about it when I hear it on the phone. As research has shown, however, nothing is too trivial for a SWORS sufferer not to see it as evidence of a multi-tentacled conspiracy (with, of course, the evil Nancy Pelosi at the controls) to deprive us of our precious freedom or pollute our bodily fluids or sell us all to the Arabs, or something.

The right-wing blog The New Ledger picked up the story first, blaring: "Why Does Nancy Pelosi have a Problem with Patriotic Music?" in big, Omigod-this-is-the-end- of-the-world headlines.

Others, like the conservative flagship blog RedState, followed suit. Republican Rep. Fred Upton (R-Wingnuttistan) wrote an indignant letter to Beard protesting the change. The CAO apparently decided "meh, it's not worth the trouble," and popped the old CD back in.

As usual, the SWORS-afflicted could have controlled the symptoms of the disease by performing an act that used to be standard procedure for journalists, but which now only seems to be practiced by left-leaning bloggers: picking up the phone and asking some questions before you shoot ff your mouth. Which is exactly what blogger Amanda Terkel of the liberal blog Think Progress did.

"The music was changed during recess," Beard's office explained to her, "as a pilot program in an attempt to offer offices a choice of hold music. This had nothing to do with the leadership, not in the beginning or the final outcome."

It does seem rational that the speaker of the House, the person third in the line of presidential succession, would indeed have better things to do than pick the hold music on the phone system. A primary symptom of SWORS, however, is a profound resistance to rational explanations, as well as the belief that those offering them are part of the very evil cabal they're railing against.

By Wednesday, FOX News had picked up the "Nancy Pelosi hates patriotic music" story and its resolution. Morning Host Steve Doocy was beside himself with glee over the victory of the forces of Lee Greenwood and John Phillip Sousa over the encroachment of Kenny G and his Smooth Jazz Legion of Doom.

Celebrating imaginary victories in imaginary wars: If someone you love does this, he or she may be suffering from SWORS.

Unfortunately, there is no cure, and no help for the afflicted. But you can always do what I do: amuse yourself by making fun of them.