Bad Ideas: Then And Now 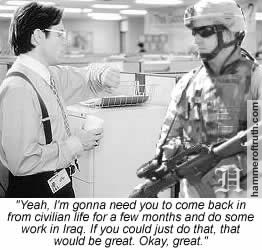 Oh, Lord, not this again.

If there's anything that sinks the new, fresh class of Democrats in the new Congress, it's going to be the old Democrats who are left over.

Somebody needs to tell some of these dinosaurs that they're part of the reason the Democrats lost the majority in the first place, and that the new majority is not a license to trot out your old, cockeyed ideas.

The inspiration for this particular rant is ancient Congressman Charles Rangel of New York City, who's been a member of the House since 1970. Because of seniority rules, Rangel is first in line to chair the powerful House Ways and Means Committee. And what does Rangel want to do first?

He wants to bring back the draft.

If this sounds familiar, it's because he has pulled this stunt before. He first proposed a draft back in 2003, presumably as a way to shock the public out of its support for Dubbya's wacky Iraqi adventure.

"If those calling for war knew that their children were likely to be required to serve -- and to be placed in harm's way," he said at the time, "there would be more caution and greater willingness to work with the international community in dealing with Iraq."

Now with the war dragging on, Rangel is singing the same tune.

"There's no question in my mind," Rangel said recently, "that this president and this administration would never have invaded Iraq, especially on the flimsy evidence that was presented to the Congress, if indeed we had a draft and members of Congress and the administration thought that their kids from their communities would be placed in harm's way."

Oh, really? Does Rangel really think that conscription might prevent wars? Does the name "Vietnam" strike a familiar note?

And does he really think that the children of the rich and powerful won't find some way to avoid being placed in harm's way? Has he forgotten the history of the man who's currently sitting in the White House? (Which reminds me of my favorite joke of the week: President Bush supposedly called up Sen. John Kerry to ask if Kerry, as a bipartisan gesture, wanted to accompany him on his recent diplomatic visit to Vietnam. "Nah," Kerry said, "You go. I already went.")

I admit that there's a certain appeal to the idea of drafting all these fresh-scrubbed young Republican types who earnestly tell you that the war in Iraq is part of a clash of civilizations and that it's our generation's Great Struggle, right before they explain why they won't be signing up because, you know, they want to go to college and serve their country by becoming investment bankers.

When I read pampered rich-boy commentators like the National Review's Jonah Goldberg describing why he doesn't join up after being a rabid war supporter -- "I'm 35 years old, my family can't stand the lost income, and I have a baby daughter" -- it certainly is nice to fantasize about yanking them out from behind their keyboards and shipping them to Baghdad to guard convoys next to a National Guardsman who hasn't seen his own family (or his former income) for a while.

But let's face it, how fair would that be to the National Guardsman? We've done a pretty good job in the last few years of showing that a motivated, professional volunteer army can whip a conscript army any day of the week. Now that our enemies are motivated volunteers, why would we want to field an army of conscripts?

Here's the thing that really chaps my butt: Rangel knows he's not actually going to get a draft put in place. His first attempt lost 402-2, and there's no reason to believe it'll do any better this time around. Incoming Speaker Nancy Pelosi has gone on record as saying she doesn't support the measure, and as far as I know, not a single other Democrat has signed on.

No, what Rangel really wants to do is hold hearings. He wants to ask about current and future troop levels and Dubbya's future plans. "Mr. President," he's said he'd ask, "share with me what is victory, and if you have any clue what you're talking about, who is the enemy? ... Who do we negotiate the victory with? ... Who sets the agenda in the Middle East?"

In other words, Rangel doesn't really want a draft. He's grandstanding. He's like that Republican idiot from Louisiana who held lengthy hearings on why the networks got confused in calling the results of the 2000 election so wrong on election night (without any real idea of anything to do about it) just because he wanted to mess with the networks. I didn't like it then, and I don't like it now.

The new congressional leadership needs to concentrate on getting something done, not wasting our money making a point that everyone already gets.

Man, Some Days Nothing Goes Right

Dubbya's Daughter Robbed in Argentina While Under Secret Service Protection.

It's like a cloud of bad karma enveloping everything in its path.
Posted by JD Rhoades at Tuesday, November 21, 2006 0 comments

We Won! Let's Fire the Coach!

Former Clinton campaign manager James Carville has always been a little strange. But after the recent congressional elections, he seems to have completely lost his freakin' mind.

After a historic election in which the Democrats gained 29 seats in the House (after recounts), four in the Senate (plus two Independents who will be part of the Democratic Caucus), gained six state governorships, and gained 320 seats in state legislatures, including taking control of eight statehouses, what was Carville's recommendation?

Fire Democratic National Committee Chairman Howard Dean. Not only that, Carville asserted, we needed to replace him with one of the only Democratic Senate candidates who lost a close election, Tennessee's Harold Ford.

Uh... what? Last time I checked, you can the guy at the top when you lose, not when you win. If the UNC Tar Heels win a national championship (please Lord, oh please) and someone comes up the next day and goes "you know what, we oughta fire that Roy Williams," they'll put him in a rubber room. But this simple logic seems to be lost on Carville.

"Suppose Harold Ford became chairman of the DNC," he said recently. "How much more money do you think we could raise? Just think of the difference it could make in one day. ... I just appointed myself his campaign manager."

Dear Lord. Somebody fetch a net.

Carville and his cronies in the Democratic Leadership Council (aka the Hillary Clinton Wing) found fault with Dean's insistence on what's come to be called the "50-state strategy." Rather than the traditional democratic strategy, which was to concentrate on a few "key districts" where the party's Wise Men figured they had the best chance to gain seats, Dean put the party's time and money into building Democratic Party infrastructure everywhere in the U.S.

But the biggest gripe the DLC types have with Dean is that he's "abrasive" and that he hurts fundraising as a result. (Imagine what it must be like to be called abrasive by James Carville). Dean was "confrontational," they griped. He'd alienate the voters.

Then there was "The Scream," where Dean was caught on tape exhorting a cheering crowd to keep fighting.

Later it was revealed that the network reporters (you know, the so-called "liberal media") had mixed down the audio track of the crowd noise so that, instead of sounding like what he was -- a man trying to be heard over a noisy crowd -- Dean sounded like a raving maniac. "The Scream" turned Dean into a laughingstock and probably cost him the presidential nomination.

But who's laughing now? The 50-state strategy worked. Instead of a narrow majority in the House, the Democrats have a solid one. They took the Senate, which even some Democratic optimists doubted would happen.

The 50-state strategy helped toss the arrogant pronouncements of Tom DeLay and Karl Rove that the Republicans would henceforth enjoy a "permanent Republican majority" into the Dumpster of History.

And as for confrontational: When the Democrats stopped worrying about whether Republicans would say nasty things about them, stood up and said what they believed in, people listened.

And when they listened to what Democrats actually had to say, rather than the spun Republican version of it, they liked what they heard: The war in Iraq is stalled and needs new direction. We need an increase in the minimum wage. Someone needs to fix the Medicare prescription drug bill so it's not a feeding trough for big pharmaceutical companies. And we need to get rid of the corruption, criminality and cronyism exemplified by people like convicted Congressfelons Randy Cunningham and Bob Ney, not to mention creepazoids like Mark Foley.

People heard a message that cut through the noise of Republicans bleating about how "all the Democrats were about was hating Bush." People heard the message, and that message worked.

They spent so much time equating the war in Iraq with the war on terror that, when that war started turning into a quagmire and the incompetence of Donald Rumsfeld in prosecuting that war was revealed, people no longer trusted the Republicans to be the party that could save us from the bad guys. Pretty soon it was hard to believe that the Republican Party stood for anything at all other than maintaining power, whatever the cost and whatever sleazy tactic or slur they had to use.

The conventional wisdom about George W. Bush and his party was that they won because people thought, "Well, you may not agree with them but at least they stand for something." When that failed, so did they. And when the Democrats stood up and stood for something, they won.

That's the legacy of Howard Dean, and it drives Carville and the me-too Democrats in the DLC, whose strategy for victory has always been to turn the party into Republican Lite, straight up the wall.

But then, what has James Carville won lately?