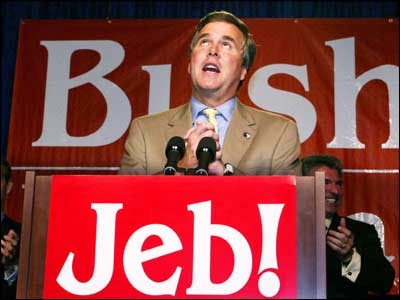 After the announcement of the Leadership PAC, JEB! also announced that he was resigning from every private and nonprofit board of directors he sits on, according to stories in Politico and The Washington Monthly. Severing himself from all those corporate ties (which took effect on the last day of 2014) gives him a chance to characterize any slimy or damaging corporate connections as “long in the past” by 2016.
This may seem a curious attitude from the party who will be trying frantically to hang the 1990s-era indiscretions of Bill Clinton around his wife’s neck, but then, no one demands consistency from Republicans. Certainly not the national media.
In politician-speak, all of this means: “I’m totally running, but to announce this early would seem crass.” After all, the last thing someone running for the most powerful job in the Free World wants to appear is ambitious.
While I’ll probably never agree with JEB! on a lot of issues, I’ll give him credit for being at least reasonable on things like immigration reform and Common Core. He’s also miles ahead of many members of this party on the environment, according to statements I’ve read from both Democrats and Republicans from Florida. In fact, JEB! Is now a candidate for my small list of sane Republicans.
That’s going to be a problem for him.
See, there are two things that really grind the gears of the far right: (1) any proposal for immigration reform more realistic than “put a giant electric fence on the border and ship every single illegal immigrant home tomorrow, including the toddlers”; and (2) Common Core, a system of national education standards that they don’t really know anything about, but which Fox News has assured them is the thin end of the wedge for Islamofascistcommiesocialism.
JEB!, however, has stated that illegal immigrants “broke the law, but it’s not a felony. It’s an act of love.” Oh, the heresy! He went on to say, “It shouldn’t rile people up that people are actually coming to this country to provide for their families.”
This is guaranteed not to sit well for those for whom “riled up” is their default state, especially when it comes to Those People.
As for Common Core, it’s been decried by other Republicans such as Jim DeMint, former senator and Heritage Foundation president, who says the standards “substitute an unaccountable federal bureaucracy for state, local and parental decision-making in education.” It has also been condemned by presidential hopefuls Marco Rubio, Rand Paul, Ted Cruz, Rick Perry and Rick Santorum. But JEB! has vowed to keep pushing it, calling the standards “good for the country.”
So by 2016, JEB! will have two choices. He can stick to his guns on immigration reform and Common Core and lose primary after primary to one or the other of the jokers who’ll keep popping out of the Republican Clown Car to be the front-runner for 15 minutes before imploding in a cloud of racism, misogyny, or bat-spit craziness. Or he can pull a Romney and try to run from things he once championed, to convince the raging right he’s one of them, and then lose the general because neither side trusts him.
So far, JEB! has shown an admirable tendency to take the first option. He’s even said he’s willing “to lose the primary in order to win the general.” How he hopes to win the general election without getting enough primary and caucus votes to get the nomination has not, however, been disclosed by his campaign. It’s probably some kind of top secret “strategery.”
Or possibly, the wingnuts will be able to choke back their bile over immigration and Common Core and embrace JEB! as the one most likely to beat Hillary Clinton. After all, as governor of Florida, he did do some things they love. He cut taxes, of course. He signed the Stand Your Ground law, which effectively legalized the killing of young black men if you could convince a jury you were scared enough of their hoodies and Mighty Black Fists of Doom. He ended affirmative action in state college admissions.
The Teahadists love that sort of thing and, if they can find it in their hearts to compromise, just a leeetle bit, on a couple of issues …
Wait. What I’m I saying? They’ll never do that. JEB! is toast.
Posted by JD Rhoades at Saturday, January 10, 2015 0 comments

Flights of Insanity: The Media and Missing Jetliners


What is it about missing jetliners that causes media outlets to completely lose their minds? (I mean, even more than usual.)
You may remember what happened after the disappearance of Malaysia Airlines flight MH370 in March of last year. Bafflement about what had happened to the unfortunate aircraft quickly gave way to the type of crack-brained speculation you’d expect from a barefoot bearded guy raving on a street corner in a dirty pajama bottom and a stained Army surplus jacket.
Our old friends at Fox News, for example, trotted out one crazy theorist after another. They had a retired lieutenant general who came on and said he was “certain” the plane had been hijacked and secretly taken to Pakistan.
They had Erik Rush of WorldNet Daily, who appeared on Fox and claimed to have a source who told him that the U.S. (on President Obama’s orders, of course) took control of the plane via remote control of the “fly-by-wire” system, then diverted it to the Indian Ocean island of Diego Garcia. There, software engineers who were preparing to defect to China with sensitive computer data were taken away, and everyone else on the flight was murdered to cover up the plot.
The one who really led the charge over the Cliffs of Insanity, however, was CNN’s Don Lemon, whose commentary on the disappearance of Flight MH370 earned him a spot on the Columbia Journalism Review’s “Worst of 2014” list.
Lemon got the ball rolling when he began openly wondering if there was a “supernatural” explanation for the plane’s disappearance. “Why aren’t you talking about the possibility,” he demanded, “that something odd happened to this plane, something beyond our understanding?”
What cemented his place in last year’s Hall of Shame, however, was the moment when he suggested, in front of a panel of guests, that the plane might have been sucked into a black hole in the sky. “I know it’s preposterous,” Lemon said, “but is it really preposterous?”

Yes, Don. Yes, it is. I hear that Stephen Hawking is working on designing a mechanical arm so he can whop you upside the head with it.
Now, with the disappearance of AirAsia Flight QZ8501, it appears as if the same silly circus is beginning again. Fox News host Anna Kooiman asked if maybe the plane crashed because of “differently trained” pilots using the metric system. “It’s not just a difference in the way that we measure things?” she asked. “Is it not as safe in that part of the world? Because our viewers may be thinking, ‘International travel, is it safe? Is it not safe?’”
Over on CNN, “aviation expert” Mary Schiavo attempted to assure us that it couldn’t be a terrorist attack because “most terrorist activity takes place in good weather.”
Meanwhile on Twitter, CNN viewers have been begging the network for “less crazy this time.” Well, we can hope, I suppose, especially now that they may have started finding actual debris and bodies from the terrible crash.
Part of the problem, as always, can be laid at the feet of the 24-hour news cycle, which constantly demands new material to view, read or download. Certainly there’s a powerful temptation to feed that ravenous beast with anything near to hand, even if it’s garbage.
In addition, as people like Harvard Law professor Cass Sunstein (author of the book “Conspiracy Theories and Other Dangerous Ideas”) have pointed out, inconsistent information from “official” sources contributes to an environment of uncertainty. That kind of uncertainty provides fertile ground for the wildest conspiracy theorists.
That’s a reasonable explanation for the behavior of the paranoid fringe, wrapping their tinfoil hats on tighter as they hammer away on their keyboards to blog about their latest demented fantasy. But when it comes to supposedly “legitimate” news sources (and, for the moment, I’ll include Fox in that category) — well, to paraphrase one of my favorite lines from one of my favorite movies, it’s not their job to be as freaked out as we are.
Certainly it’s the responsibility of governments involved in a mass disappearance or other disaster to provide accurate information in a timely fashion. But in the event that they don’t, it’s equally the responsibility of news organizations not to fill the void with ridiculous speculation and wild theories that would embarrass a writer of ’30s pulp novels.
Like it or not, the news media help shape public perception and opinion, and that gives them a responsibility beyond just filling air time with nonsense. Someone needs to act like the grownup here.
Posted by JD Rhoades at Monday, January 05, 2015 3 comments