The Spanish Version of Breaking Cover Comes Out Tomorrow 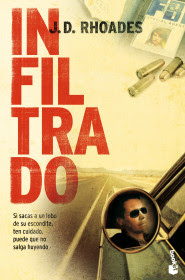 It sometimes surprises people to know that a simple country lawyer like me really likes New York City. I wouldn't want to live there, mind you (too expensive), but I do enjoy spending time there, walking around the place, taking in the sights, such as the Empire State Building, Central Park, the Naked Cowboy ...

What's that, you say? You don't know about the Naked Cowboy? Well, pull up a chair and give a listen, brethren and sistern, and let me tell you about him.

The Naked Cowboy (real name Robert John Burck) has been a fixture in New York's Times Square for years. He's a street musician who's become so famous that he's got his own stop on the Gray Line tour.

He occasionally goes on tour outside the Big Apple as well, appearing in such places as Austin, Texas; New Orleans at Mardi Gras; and his hometown of Cincinnati for Memorial Day. He's appeared in music videos and TV commercials. He's even franchising the concept - for $5,000 a year, you too can be your own city's Naked Cowboy (or Cowgirl).

It should be noted that the Naked Cowboy does not, in fact, appear entirely naked. That would probably get him arrested, even in New York. He performs his tunes dressed in a cowboy hat, white boots and a strategically placed red, white and blue guitar that covers up the fact he's dressed in his tighty whities.

Now the Naked Cowboy wants to be your president.

On Sept. 29, 2010, the NC appeared, uncharacteristically dressed in a suit and tie and with his long hair cut short, to announce that he planned to challenge Barack Obama in 2012 for leadership of the Free World. And guess which party's banner he plans to run under?

But sorry, guys, he's yours. The Bare Buckaroo is, indeed, a self-declared tea party candidate.

At first, I was thinking that this had to be some sort of joke, like Christine O'Donnell. Then I remembered, O'Donnell's not actually playing it for laughs, even though she begins her most recent campaign ad by denying she's a witch.

(Here's a hint: If you're forced to start off by disavowing earlier videotaped statements that you once practiced the Dark Arts but that you're much better now, you're already way behind on the PR battle.)

No, the Cowboy Formerly Known as Naked was right out there at his opening press conference with a straight face and a mysterious blonde woman (possibly Mrs. Cowboy) by his side. He was spouting that good old tea party line: The Evil Guvmint's taking over everything, so he's going to reduce the civilian federal workforce by 40 percent "or more" (while of course providing no details about which four out of 10 he'd cut).

He also wants to make all welfare recipients take random drug screens (whether there's any evidence they're using drugs or not). He wants to eliminate the federal Department of Education altogether. Asked about his recent occupation, he hesitated for only a brief second before earnestly explaining that "naked is a metaphor for honest."

He fits right in with the politicians like Nevada Senate candidate Sharron Angle, who claims to deplore Washington "backroom" deals and then gets caught on tape trying to make just such a deal, offering an opponent access to power brokers if the opponent will just drop out of the race.

The Naked Cowboy is just trying to do what he's done for years. He's a huckster, a showman, trying to shake a few coins out of the rubes from out of town before hopping on the very gravy train he claims to want to derail.