Obama: Give health care an 'up or down' vote:

President Barack Obama urged Congress Wednesday to vote "up or down" on sweeping health care legislation in the next few weeks, endorsing a plan that denies Senate Republicans the right to kill the bill by stalling with a filibuster.

I say that because it's high time the magic words "up or down vote" were used in place of "reconciliation," which most people don't understand (including, apparently much of the Senate).

After all, the phrase (often rendered as 'upperdown vote") became a Republican mantra when they were in power and the Democrats threatened a filibuster. "So and so deserves an upperdown vote," "The American people want to see an upperdown vote on Judge so and so", etc.

Unfortunately, I don't know if the Dems have the message discipline to do it.

“I have a constituent that you won’t believe and I know you won’t, but her sister died, this poor woman had no dentures,” Slaughter, D-Fairport, said. “She wore her dead sister's teeth, which of course were uncomfortable and did not fit. Do you believe that in America that’s where we would be?”

“If you don’t have any teeth, so what? What’s applesauce for?”

Remember folks: at one point, assholes like Limbaugh ran the country. Now, the chicken-livered Democratic Congressional Delegation acts like they still do.

Email ThisBlogThis!Share to TwitterShare to FacebookShare to Pinterest
Labels: assholes, GOP bullshit, The Party of Love, why we fight

Two thousand federal transportation workers will be furloughed without pay on Monday, and the Obama administration said they have a Kentucky senator to blame for it.

The furloughs and freeze on payments were the result of a decision last week by Republican Sen. Jim Bunning to block passage of legislation that would have extended federal highway and transit programs, the department said. Those programs expired at midnight Sunday.

The extension of transportation programs was part of a larger package of government programs that also expired Sunday, including unemployment benefits for about 400,000 Americans.

Bunning's reaction, when pressed on the issue:

But Lamar Alexander claims that if the Democrats pass the health care bill through reconciliation, it will "end the Senate as a protector of minority rights, the place where you have to get consensus, instead of just a partisan majority."

Of course, reconciliation wasn't a problem for Senator Alexander the times he voted for it.

Minority Leader Mitch McConnell warns of a "severe reaction" if reconciliation is used.

Of course, he didn't have a problem when it was used 19 other times to pass bills the Republicans liked, like the Bush tax cuts.

You know what, Senator Alexander, Senator McConnell? You've had plenty of chances to have a say in this, and your reaction has always been to whine that anything less than total capitulation isn't being "bipartisan."

Email ThisBlogThis!Share to TwitterShare to FacebookShare to Pinterest
Labels: GOP bullshit, hypocrites, The Party of Love, why we fight

BIG TEACHER IS WATCHING YOU 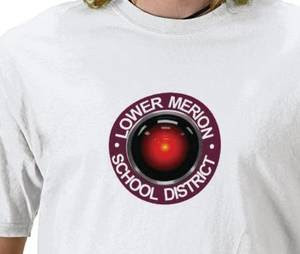 Blake Robbins probably thought it was pretty neat when his school, Harriton High School in the wealthy Philadephia suburb of Ardmore. sent a new Macbook laptop computer home with him. His school district, one of the wealthiest in the country, had issued the laptops to its high school students.

But when Blake was called into the Vice-Principal's office and accused of '”inappropriate behavior off school grounds,” he discovered another use for the computers that neither he nor his parents knew about. According to a lawsuit filed in Federal Court, Blake was confronted with pictures of himself, allegedly taking drugs. The pictures had been taken by the built in camera on his own computer.

Now, anyone who's had any contact with the justice system here in the 21st century can probably tell you about defendants who've been undone by taking pictures of themselves brandishing weapons, ingesting drugs, or showing off ill-gotten gains, then posted them on their MySpace and Facebook pages (yes, some criminals really are that dumb).

But that wasn't what happened in Blake's case. He found, to his (and his parents') horror, that the computers contained software that allowed school administrators to turn the cameras on remotely and photograph whatever was in the room with the computer.

At first, the school admitted that it had turned on its all-seeing eyes a total of 42 times, but insisted that the system was only used to track “lost or stolen” laptops. This did not address the question of how Blake's machine, which was neither lost or stolen, had its camera activated so that school administrators could peer into his home.

Later investigations by the Philadelphia Inquirer showed that the network administrator responsible for the laptop program apparently had not gotten the memo about only using the program to search for purloined hardware. In a case of almost too-perfect irony, the administrator, Mike Perbix, had posted his own video on line touting the neat things that could be done when you turned school computers into surreptitious surveillance devices. It showed him, for example, snapping “as many as 20 photos of a teacher and some students without their knowledge while in the classroom.” Perbix apparently thought this was a keen thing to be able to do: “It's a fantastic feature," the Inquirer quotes him as chuckling. I don't know about you, but the idea of some geeky IT guy chuckling over his ability to spy on kids without permission creeps me out.

Blake's parents have now filed a class action suit against the school district. The FBI is also investigating for potential violations of Federal wiretapping laws.

For years, under the banner of “maintaining order”, the schools have demanded increased power to encroach on the privacy and free-speech rights of students. They've also moved to criminalize every behavior problem, to the point where students who commit infractions that would at one time have gotten them sent to the office end up in court, charged with crimes. And the courts, on all levels, have pretty much let them have their way, especially in the post-Columbine world, in which it sometimes seems as if every student is regarded as a criminal by default. In one case that I've written about in this column, a student was locked up when his response to the prompt “write a scary story” led to...well, a scary (and violent) story. In another, the U.S. Supreme Court ruled that a student could be suspended for a drug-related joke made off campus. In such an environment, why shouldn't a school feel entitled to send surveillance devices home with a student? Especially if he was caught doing drugs?

Except that those “drugs” Blake was supposedly taking turned out to be candy. Something called Ike and Mikes. I'm sure we're all glad that this brave new technology is being deployed to protect us and our children from sugary snacks.

George Orwell, in the book “1984”, wrote about a society in which everyone had a “telescreen,” a device in the wall that provided propaganda broadcasts, but which could also be used by the totalitarian government of Big Brother to keep an eye on citizens. You never knew when the screen was being monitored, so you had to live at all times as if you were being watched.