The Latest Threat to Our Freedoms: Rental Bikes? 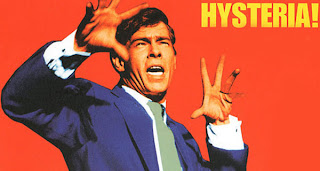 It seems there’s this new thing in New York City called CitiBike. Based on similar bike-sharing systems in other major cities around the world, Citibike, according to its website, “consists of a fleet of specially designed, sturdy, very durable bikes that are locked into a network of docking stations sited at regular intervals around a city. The bikes can be rented from and then returned to any station in the system.” It’s run (and this is important) by a private company and receives no money from the city, although the city’s Department of Transportation (yes, NYC has its own DOT) endorses it. CitiBike brags that it’s “creating 170 jobs and generating $36 million in local economic activity annually.”

Well, the Wall Street Journal Editorial Board, for one. Or at least its chairman, a lady named Dorothy Rabinowitz. In an extraordinary five-minute video rant posing as an interview (and entitled “Death by Bicycle”), Ms. Rabinowitz rails against the program asif it were Hitler’s annexation of Czechoslovakia. Tossed a softball question about why the program was needed (“are we too fat?”) the diminutive and belligerent Ms. Rabinowitz was off and running: "Do not ask me to enter the minds of the totalitarians running this city.” But she was just getting started: "I would like to say to the people who don't live in New York... envision what happens when you get a government run by an autocratic leader."

Well…okay, I will, but what does that have to do with a privately funded and completely optional bike rental program? The raging Ms. Rabinowitz is never really clear. What is clear is that she really doesn’t like New York Mayor Michael Bloomberg or Transportation Commissioner Janette Sadik-Khan, who she describes as “ideology-maddened.”

She’s not all that crazy about bicyclists, either. “The most important danger in this city,” she insists, “is not the yellow cabs… it is the cyclists, empowered by the city administration.”
Wow. If bicyclists are “the most important danger in the city,” then I guess they’ve completely licked crime, pollution and terrorism. You’d think Mayor Bloomberg would get more credit. She also warns darkly about “the bike lobby” which she characterizes as “an all-powerful enterprise.” (If you wondered where all the Mafiosi went, they’re running Schwinn.)

It’s hard to watch the video without wondering “What on Earth is the matter with this woman?” So, a little Google, a little Wikipedia, and we find that: “Dorothy Rabinowitz is an American conservative journalist and commentator.”

Oh, a conservative. That explains everything. In the past few years, “conservatism” has become less and less about an intellectual movement and more and more about being addicted to hysteria and hyperbole. It’s a mindset where someone choosing to rent a cheerful bright blue Citibike from a private company can become as ominous a symbol of tyranny as a Red Chinese tank in Tiananmen Square. It’s a mindset where Agenda 21, a non-binding, completely voluntary action plan by the UN (essentially 300 boring pages of suggestions—seriously, read it sometime), can be characterized byGlenn Beck as a plan for "centralized control over all of human life on planet Earth” and lead to concerned declarations deploring it by our own county commissioners, who apparently had too much time on their hands.

Some of the blame can be laid, I think, at the feet (or tentacles) of the Internet. No one gets page views, re-tweets, and links to their sites by responding to, for instance, the loss of an election by saying things like “Well, I’m disappointed but the people have spoken”. No, to get attention, you’ve got to respond by thundering “We are no longer a democracy!” (Donald Trump) or “Goodluk America u just voted for economic & spiritual suicide” (Ted Nugent). By the same token, no one’s going to watch a video with a nice little old lady from the WSJ saying, in a reasonable tone, “I think suddenly flooding New York’s crowded streets with rental bikes, probably ridden by people who don’t own their own and therefore may not ride much, may be risky.” That might be a valid point, but it’s not going to go viral.

In the online age, you’ve got to pitch a fit to get people to listen. You’ve got to throw a tantrum. It’s an environment particularly suited for modern conservatives, or, as a writer friend of mine calls them, “The Tantrumists.” Perhaps the WSJ should change its name to the “Tantrum Gazette.”

Book of Shadows by Alexandra Sokoloff


Alex Sokoloff blew me away with her first novel "The Harrowing", and she's just gotten better and better with every book. She writes what I like to call "whatdunnits": mysteries and thrillers with a supernatural overtone in which the main characters (and the reader) are trying to figure out if their enemy is a particularly evil human or...something else, something Other. This is a brilliant example of that style, with some added eroticism to spice things up. Sokoloff is an deft, assured writer with a real gift for putting your head right into the scene using all the senses. She can really bring the shivers, both the sexy and the scary kind. Highly recommended.