Was (Not Was) sings their classic "Walk the Dinosaur." Boom Boom Acka Lacka Boom Boom...

Soon after Sarah Palin was elected mayor of the foothill town of Wasilla, Alaska, she startled a local music teacher by insisting in casual conversation that men and dinosaurs coexisted on an Earth created 6,000 years ago -- about 65 million years after scientists say most dinosaurs became extinct -- the teacher said.


After conducting a college band and watching Palin deliver a commencement address to a small group of home-schooled students in June 1997, Wasilla resident Philip Munger said, he asked the young mayor about her religious beliefs.

Palin told him that "dinosaurs and humans walked the Earth at the same time," Munger said. When he asked her about prehistoric fossils and tracks dating back millions of years, Palin said "she had seen pictures of human footprints inside the tracks," recalled Munger, who teaches music at the University of Alaska in Anchorage and has regularly criticized Palin in recent years on his liberal political blog, called Progressive Alaska.

Over at The November Blog, they're suggesting the nickname "Tri-Sarah-tops" for Palin. Personally, I think "Wilma" as in Flintstone) is more apropos.

Because We Could Use a Laugh Right Now 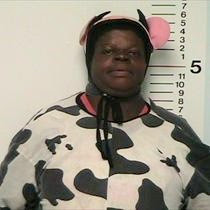 (Middletown, OH) -- Saturday night, people in the 3100 block of Wilbraham Road called police to report a woman wearing a cow costume was chasing kids, and blocking traffic. Michele Allen also allegedly urinated on the porch of one neighbor.
When officers arrived, they told her to go home. But later that night, they found her again, in the 2400 block of Verity, standing in traffic. This time, officers say, Allen smelled of alcohol and swore at them.

She was arrested and charged with disorderly conduct.

Allen plead guilty, Monday morning, in Middletown Municipal Court, and sentenced to a month in jail.

Email ThisBlogThis!Share to TwitterShare to FacebookShare to Pinterest
Labels: non-viable strategies for living

Your Liberal Media At Work

Talk about burying a lede. Some 1,100 words into his 1,400-word piece (“‘Substantive’ Press Is Taken for a Spin”) in today’s Washington Post, uber-critic Howie Kurtz writes, “While some journalists say privately they are censoring their comments about Palin to avoid looking like they’re piling on, pundits on the right are jumping ship.”

The news here is even buried within its own sentence. Again, just to be clear: some journalists say privately they are censoring their comments about Palin to avoid looking like they’re piling on.

Stories like this are the main reason that my attention level immediately drops to nothing when some dingbat commenter or pundit starts yammering about the "liberal media."

People who pay attention have noted for years that the press, until very recently, has bent over backwards to let Republicans and conservatives say any old bullshit they want without bothering to challenge or fact check them. In some cases, like that of the NY Times' Judith Miller, they've become unapologetic cheerleaders for the Bush Administration. It's been heartening to see that, despite some reversion to their bootlicking ways, (particularly whenever McCain's military serice is brought up),  the press has actually started asking some tough questions. Unfortunately, with only a few exceptions, they apparently think Sarah Palin's not up to that, leaving it to the right wing pundits to ask the questions about Palin's competence that need to be asked.

The bickering over the vote began immediately with Republicans alleging that a speech by House Speaker Nancy Pelosi blaming the crisis on the policies of the Bush administration prompted wavering Republicans to vote against the bill.

"We could have gotten there today had it not been for this partisan speech by the speaker on the floor of the House," said Rep. John Boehner, R-Ohio, the House minority leader. He said Pelosi's speech "poisoned" efforts to get Republicans to back the bill.

Note well what' s being said here. According to their own leader, House Republicans whose support of this bill was necessary for its passage voted against it, not because it was bad for the country (which it very well may be) but because they got mad at something Nancy Pelosi said about them.

That's real leadership, right there. When are they going to get some damn grownups in charge?

"Well if that stopped people from voting, then shame on them," he said. "If people's feelings were hurt because of a speech and that led them to vote differently than what they thought the national interest (requires), then they really don't belong here. They're not tough enough."


But think about this. Somebody hurt my feelings, so I will punish the country. That’s hardly plausible. And there are 12 Republican members who were ready to stand up for the economic interest of America, but not if anybody insulted them.

I’ll make an offer. Give me those 12 people’s names and I will go talk uncharacteristically nicely to them and tell them what wonderful people they are and maybe they’ll now think about the country.
Posted by JD Rhoades at Monday, September 29, 2008 17 comments

When George W. Bush was first running for office, he said -- with a straight face, mind you -- that he intended to be a "uniter, not a divider."

Well, it seems that, at long last, he's managed to make that promise come true. Because other than investment bankers or CEOs of ega-insurance corporations, absolutely no one likes the
$700-billion-plus bailout of the financial services industry, at least the one originally proposed by Treasury Secretary Henry Paulson.

To hear Paulson tell it, though, if we don't pass his three-page plan right freakin' now, the entire U.S. economy will collapse. If it hadn't passed by today, Paulson implied, Donald Trump will be selling apples on street corners on Monday, we'll be standing in line at soup kitchens with our tattered ragamuffin children by Wednesday, and by Hallowe'en we'll all be putting on our leather jackets and hockey masks and heading off into the desert to fight for survival a la "The Road Warrior."

Whoa, said congressmen on both sides of the aisle. This plan hands the treasury secretary an enormous check with which to buy up "mortgage-related assets" and to do so "without limitation." We need to put in some kind of oversight, said lawmakers, and to place some conditions on this much money. Like, for instance, making sure none of it goes to pay big severance package payouts to the CEOs who led the companies to ruin in the first place. Or perhaps a provision to let bankruptcy judges reform mortgages so the bank gets paid something and people get to stay in their homes.

Oh, no, the Bushistas said in horror. If you put conditions that tell banks and investment firms what they have to do to get their mitts on billions of dollars of our money, it might, and I quote, "reduce participation" in the plan.

White House spokesman Tony Fratto told reporters: "You have to remember, these are not all weak or troubled firms a lot of them are very successful banks and investment houses that have done very well, have been responsible, are holding performing assets that have value. They were not necessarily irresponsible players, and so you have to be careful about how you deal with them."

Now wait just a doggone minute here. This is supposed to be an emergency measure, right? A vitally needed lifeline? Now, I'm no fancy financial genius, but it seems to me that a financial institution that can look at the lifeline and go, "Eh, no thanks, too many strings attached" is perhaps not bad off enough for our tax dollars to be used for life support.

Then there's the matter of Secretary Paulson's credibility. At some point during his opening statement to the Senate, he veered from the text of his carefully prepared remarks and asserted that there was nothing about oversight in the original draft of the bailout plan because he knew that was a detail he would need to work out with Congress.

"I want it, we all want it," he said about oversight.

As the kids on the Internets say, O RLY? Paulson's defense sounds plausible until you actually, you know, read the plan. It doesn't just "not mention" oversight. It states in plain English that there is to be none: "Decisions by the Secretary pursuant to the authority of this Act are non-reviewable and committed to agency discretion, and may not be reviewed by any court of law or any administrative agency."

Then of course there's Paulson's own whopping conflict-of-interest problem. Paulson is former CEO of Goldman Sachs, a company that stands to benefit in a big way from the bailout. And, one way or another, he's going to be looking for a job come January. Where exactly do you think he is going to go looking, other than the very companies he's going to be throwing a trillion or so dollars of your money at? Hint: It ain't gonna be bagging groceries at Food Lion.

Let's see: using dire predictions of imminent disaster and lies to frighten and bully people into handing the executive branch a blank check and unfettered powers, all for a horrendously expensive half-baked plan which provides enormous, unchecked benefits to the former employer of one of the people pushing it. Sound familiar?

But hey, why shouldn't the Bushistas run that playbook? It's worked so well for them in the past.

Hasn't worked so well for us, though.

As of this writing, we don't know what form, if any, the bailout will take. But I do know one thing: I don't trust this administration to handle it without being kept on a very short leash.