There'll Be Some Changes Made

With the upcoming release next week of Good Day in Hell, there'll be some changes to this blog and, hopefully, to my author website. Stay tuned...
Posted by JD Rhoades at Saturday, March 18, 2006 1 comments

To hell with cheap draft beer with green food coloring. In a just world, I'd be spending the day sipping Jameson's, chasing it with Harp, and reading Ken Bruen while listening to Van Morrison and the Chieftans. Alas, the Real World intrudes....so that'll have to wait 'till this evening.

However you celebrate it, enjoy.
Posted by JD Rhoades at Friday, March 17, 2006 0 comments

To a great writer, a generous friend, and a boon drinking companion...

Happy Birthday! And many happy returns!

If you haven't yet read David's book, Beneath a Panamanian Moon...you are, I'm sad to say, unutterably lame.

But this can be remedied. Buy now.

Stop! Or the Vice President Will Shoot!

Heh. What I've really enjoyed about this whole thing is the sustained attack of self-righteousness the Bush Cult is having over the fact that people are still laughing about the Vice President of the United States shooting a man in the face.

"This isn't a story! It was just an accident! How could you be so cruel! Liberal media! Liberal Media! RAAWK!"

Face it: if Al Gore had shot someone on a hunting trip, there'd still be a Congressional investigation going on. As it is, all you have to deal with is jokes. Grow up, will ya?
Posted by JD Rhoades at Tuesday, March 14, 2006 2 comments 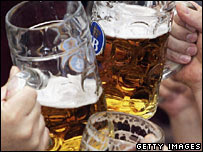 'Creative plumbing' delivers beer: A woman in Norway said she thought she was in heaven when she turned on the kitchen tap to find a plentiful supply of beer.

Unfortunately, it was discovered to be a mere plumbing error and corrected all too soon.
Posted by JD Rhoades at Monday, March 13, 2006 0 comments

Down the Memory Hole

Last week, as you may remember, I wrote about the deal — now apparently off — that would have allowed a company run by the government of Dubai in the United Arab Emirates to manage several major U.S. ports.

According to the Bush Cult, there was absolutely nothing wrong with this, since the UAE was supposedly our good buddy now and a staunch ally in the Global War on Terror or (GWOT) as they like to call it.

While researching the column on the Internet with the aid of the trusty search engine Google, I came across a report published online on the Department of Justice’s Web site. This particular quote jumped out at me:

“The Government of the UAE has formally stated that it will no longer provide judicial assistance in criminal matters, absent both extradition and mutual legal assistance treaties. Since March, the UAE has released seven U.S. fugitives. The UAE has not responded to a request for documentary evidence since 2003.”

Just so you know who we’re talking about, the quote was from a report published online by the Counterter-rorism Unit (CTU) of the Department of Justice (DOJ), which according to the report, “assists the Office of Overseas Prosecutorial Development, Assistance and Training (OPDAT), U.S. Department of Justice, in achieving its primary goal to counter terrorism…”

In short, the CTU was trying to help the DOJ’s OPDAT in the GWOT during FY2005 by working with RLA’s in the UAE. Got that? OK.

Unfortunately, as late as 2005, the UAE wasn’t being all that cooperative, at least according to the report. I found this information about a country that was supposedly going to be involved in managing our ports significant, so I put it in the column.

This past weekend, after the column came out, I went back to look again — and the quote, in fact the entire report, was gone from the DOJ Web site. I did a search in the Web sites archives on “UAE and fugitives,” and I got a link to what looked like the same page. But when I clicked the link, I got the dreaded “404 Page Not found” error.

Fortunately, there’s this gizmo called the “Google Cache.” Without going into too much geek-speak, the Cache is a “snapshot” of a web page. It’s taken by Google’s automated web-searching program as it tirelessly roams the Net, looking for new sites to index. And there the page sits, at least for the time being. And now, it sits on my computer, because I saved a copy. Thanks, by the way, go to some of the Web savants at the liberal Web site Daily Kos, who clued me in about the Google Cache when I posted an inquiry there.

But why, I wondered, was this information suddenly removed from the public Web site? Why was it apparently even removed from the archive? Was it because our own terrorist fighters in the DOJ were inconveniently reporting information that undercut the talking point that the UAE was now just fine and dandy?

Would a report about the UAE’s spotty record of cooperation with our anti-terrorist unit at the DOJ contradict the Bushista message that having them run our ports was no big problem? In short, was our Depart-ment of Justice being forced to censor its own reports concerning the War on Terror because they might be considered politically embarrassing and undercut the attempted port deal?

The whole thing is eerily suggestive of the “memory hole” described in George Orwell’s classic novel 1984. The memory hole was an actual hole in the wall of the cubicle where the book’s protagonist worked at his job in the ironically named Ministry of Truth. It led to a furnace in the basement, and all records that contradicted the Party line were fed into the memory hole, thus obliterating any inconvenient traces of a past the Party didn’t want the people to think about.

Fortunately, thanks to modern technology and the geeks who know how to use it, it’s getting harder and harder to make inconvenient information disappear.

I e-mailed the webmaster for the DOJ site, but so far I haven’t heard back. If I do, I’ll let you know. Meanwhile, an alert reader sent me a message that someone from Air America, the liberal talk radio network, picked up the Internet post I made on the subject and mentioned me by name.

So next week I could be telling you that it’s nothing. I could be famous. Or I could be a guest at Guantanamo Bay. Stay tuned. And if I suddenly disappear, someone come looking for me.