If you're not reading Kung Fu Monkey every day, you should be. I'm just sayin'.

In this installment, KFM uses an example from the online game World of Warcraft to examine President AWOL's mindset on Iraq. It's a masterpiece.
Posted by JD Rhoades at Saturday, January 13, 2007 1 comments

Those wild eyed boys at Murdaland, who were crazy enough to actually buy one of my short pieces, have a very nice write up in the Baltimore City Paper this week. It's worth checking out, and so is Murdaland.
Posted by JD Rhoades at Wednesday, January 10, 2007 0 comments

The Biggest "Fuck You" Of All 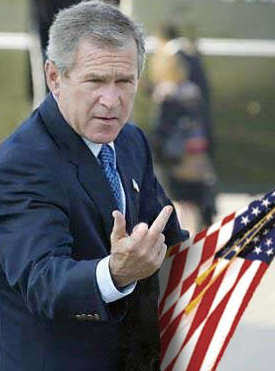 Well, the Decider has announced his plan to throw over 20,000 more troops into the Iraq debacle, cross his fingers, and pray for something good to happen.
This is the biggest "fuck you" from an Administration that had made "fuck you" pretty much a byword of their style of "governance."
So fuck you, Congress, where Republicans and Democrats alike oppose escalation. Fuck you, Iraq Study Group. Fuck you, Generals who Dubbya used to claim he took all his cues from vis a vis troop levels. Fuck you, American people, who elected a Democratic Congress largely out of dissatisfaction with this disaster and a desire to see it ended. Fuck all of you. The Decider has spoken.

My buddy Sean Chercover's great debut novel BIG CITY, BAD BLOOD is out this week. I had the privilege of reading the manuscript and had this to say at the time: "'Chercover writes P.I. fiction the way Buddy Guy plays Chicago Blues: he takes the classic forms and infuses them with fire and soul."

I stand by this opinion. It's a great read. Definitely check it out.
Posted by JD Rhoades at Wednesday, January 10, 2007 3 comments 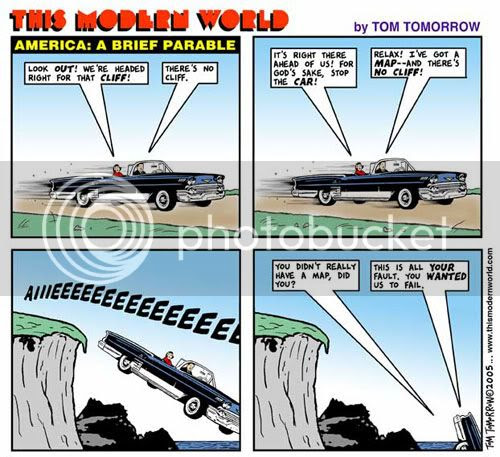 TIME's Joe Klein has begun his own blog, and what does he start off with? The same old tired right-wing talking point about how "leftists want us to fail in Iraq." The arrogant, unoriginal little gasbag "poses a challenge" to us:

Can you honestly say the following: Even though I disagree with this escalation, I am hoping that General Petraeus succeeds in calming down Baghdad.

Now that I've responded to you, maybe you'd do me the courtesy of responding to me: do you have any useful insights, like how pouring more lives into that meatgrinder is supposed to help? Or have Dick Cheney and Tony Snow not e-mailed you that talking point yet?

And while you're at it, care to back this claim up by naming the 'leftists' who want us to fail? Other than the scary voices in your head, that is.

Again, I hope that General Petraeus succeeds in calming down Baghdad. But "hope" is not a plan.

Jesus, Mary and Joseph, in what toy store did Time find this sock puppet?

(click the cartoon for a clearer picture)
Posted by JD Rhoades at Tuesday, January 09, 2007 1 comments 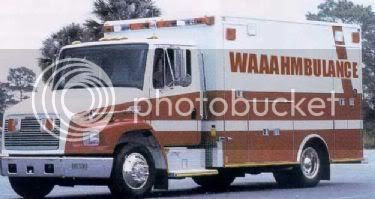 Now that the "permanent majority" the Republicans were promising turned out to be a pipe dream, they've become quite interested in preserving the rights of the minority party, namely themselves.

In fact, three Republican Congressmen -- Eric Cantor of Virginia, Tom Price of Georgia, and North Carolina's own Patrick McHenry -- have even proposed a "Minority Bill of Rights," which would guarantee several things.

Such as: "Bills would normally be considered under a procedure that allows open, full and fair debate." There would be a "fair amendment process that allows all members the right to offer amendments or substitutes." There'd be "a full 24 hours to examine bills and conference reports, and rules governing debate must be reported before 10 p.m. if a bill is to be considered the next day."

Sounds good, doesn't it? Sounds fair? That's what now-Speaker Nancy Pelosi thought when she sent a nearly identical Minority Bill of Rights proposal to her predecessor, Republican Dennis Hastert, back in 2004. Hastert refused to respond at all.

One Republican who did respond was David Dreier, chairman of the Rules Committee. Democrats were "crying," he sneered in an interview, "because they are losing policy debates over job creation and progress in Iraq."

After all, the Republicans had gotten to like big-dog tactics. Like the time Judiciary Committee Chairman James Sensenbrenner called a halt to a hearing on the Patriot Act where he thought Democrats were getting uppity. He did this by, basically, taking his gavel and going home, walking out after turning off the microphones and pulling the light switch in the hearing room.

Then there was Ways and Means Committee Chairman Bill Thomas, who once dumped a pension reform bill onto Democrats at midnight and announced there'd be a vote the next morning. When Democratic House members retired to a hearing room to actually try and read the bill, Thomas told them "you can delay, but you can't deny," got into a shouting match with Democrat Fortney Stark, then called the Capitol police to evict the Dems from the hearing room.

Republicans: They were against civility, fairness and openness before they were for it. Or, as the song goes, "Who's Crying Now"?

Now, if this were a matter of the Republicans going, "you know, you were jerks to us before we took power, then we were jerks to you, what say we all grow up and start governing the country in the manner that Americans really deserve," that would be great.

Unfortunately, as soon as Speaker Pelosi announced that she would restore open debate and free up the amendment process, the Republican response was to rub their hands with glee and promise to use this new openness and civility, not to improve legislation, but for electoral politicking.

According to a recent story in The New York Times, "the opposition leadership said it would take the opportunity to put forward initiatives that could be potentially troublesome for newly elected Democrats in Republican-leaning districts."

In other words, we're going to take your olive branch and beat you upside the head with it by loading up your bills with a lot of amendments on wedge issues. You just can't be nice to some people.

See, here's the thing. One of the things the Democrats ran on was what was called the "First Hundred Hours" plan, during which, in the first 100 hours of the new session, they promised to introduce legislation to reform lobbying; enact all the recommendations made by the 9/11 commission; raise the minimum wage to $7.25 an hour; cut the interest rate on student loans in half; allow the government to negotiate directly with the pharmaceutical companies for lower drug prices for Medicare patients; and broaden the types of stem cell research allowed with federal funds.

(What's that, you say? You'd never heard the Democrats had a plan? You thought they were only about hating George Dubbya Bush? Well, that's what you get for listening to the so-called "liberal" media, who studiously ignored the actual Democratic agenda and message throughout the entire campaign.)

Nothing would make the new minority happier than to be able to obstruct the 100 Hour Plan. So it's perhaps not surprising that the Democrats have announced that that first hundred hours won't feature quite as much opportunity for debate and amendment as previously thought -- a move, I'll note, which has drawn a lot more tsk-tsking from the mainstream press than any of the Republican outrages described above.

Still, if there's one thing recent history has taught us, it's that no party can truly count on having a permanent majority. So here's what they ought to do.

After that first 100 hours, the Democrats should get firmly behind a bill to implement a "minority party bill of rights." And that bill should include an explicit provision that it can be repealed, amended, or overturned only by a two-thirds majority vote so it can't get set aside if power changes hands again. Because let's face it, these days the only way you're going to get politicians, on either side, to be civil to one another is if you hold a gun to their heads.