Safe and Sound, the award-winning third book in the Jack Keller series, returns as an eBook at Amazon.
If you missed it the first time, that's sad. Miss it again, and it's a damn tragedy.
Posted by JD Rhoades at Thursday, March 24, 2011 0 comments

SAFE AND SOUND: Two Out of Three Ain't Bad

For some reason, the Kindle version of SAFE AND SOUND, the third Jack Keller novel, is taking forever to go live on Amazon, but the version for Nook and other e-book readers has been live for a couple days.
Posted by JD Rhoades at Thursday, March 24, 2011 2 comments

Email ThisBlogThis!Share to TwitterShare to FacebookShare to Pinterest
Labels: b, e-books, safe and sound

Today on Murderati, I talk about prophecy and publishing. Do drop by....
Posted by JD Rhoades at Wednesday, March 23, 2011 0 comments 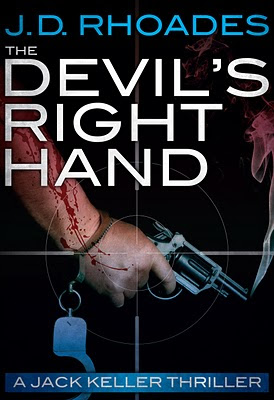 BEHOLD, Hellions! The new, way-cool cover for THE DEVIL'S RIGHT HAND e-book, once again by Jeroen ten Berge. Awesome, no?
Remember, TDRH is available for Kindle, and Nook, and other e-formats NOW! Still a bargain at $2.99...
Posted by JD Rhoades at Tuesday, March 22, 2011 1 comments

Review: ONE WAS A SOLDIER, Julia Spencer-Fleming

One Was a Soldier by Julia Spencer-Fleming
My rating: 5 of 5 stars

When I tell some people that one of my favorite mystery series features a female Episcopal priest as the main character, they act as if they expect the Rev. Clare Fergusson to be some cozy-fied, charming old cleric with a twinkle in her eye and a ready supply of quaint homilies for every occasion. Nope. Julia Spencer-Fleming writes about passionate, headstrong people with complicated emotional lives, and she does it in a way that brings them beautifully to life on the page.
In this one, the Reverend Clare is back from her National Guard deployment in Iraq, after a year and a half away from her parish--and from her lover, small-town police chief Russ Van Alstyne. Other citizens of the small town of Millers Kill are returning from overseas as well, and they all carry their own wounds, both visible and invisible. Even Clare isn’t immune, and their various struggles to come to terms with the damage of war provide as much of the dramatic tension and conflict in the book as the actual mystery. In fact, the death that drives the mystery plot doesn’t actually occur until about halfway through the book, when a member of Clare’s Veterans’ support group dies, apparently by her own hand. I for one was so caught up in the threads of the characters’ individual stories that I didn’t mind.
To her credit, Spencer-Fleming doesn’t editorialize about the wars or the politics behind them. She does unflinchingly face the fact that some soldiers come back maimed, wounded, and suffering in ways even they can barely understand and which sometimes baffle and frustrate the people around them, even those who love them most.
ONE WAS A SOLDIER is engrossing and beautifully written. A solid five stars.

View all my reviews
Posted by JD Rhoades at Tuesday, March 22, 2011 0 comments

A recent story in this newspaper about the Moore County Republican Convention noted that former Massachusetts Gov. Mitt Romney "soared to the top Saturday" in the convention's "straw vote." Receiving only a "sprinkling" of votes were Mike Huckabee, Newt Gingrich, New Jersey Governor Chris Christie - and Sarah Palin.

Only a "sprinkling" for Caribou Barbie? This seemed ominous to me, as it should to anyone aspiring to commit acts of political humor.

Then it got worse. According to an ABC News/Washington Post poll released last week, St. Sarah of the Snows suffers from slipping favorability ratings. Only 58 percent of "Republicans and Republican-leaning independents" viewed her favorably.

This might not seem too bad, until you remember that right after Honorable John McCain picked the Wasilla Whiner to corral the all important drama-queen and grievance-junkie vote, those same voters had her favorability rating up to a whopping 88 percent. As recently as October, according to a story in the Christian Science Monitor, the Resigning Woman's favorability rating among those voters was 70 percent.

Most tragically, a recent front-page article on Politico.com lined up a veritable Who's Who of conservative pundits - George Will, Charles Krauthammer, Weekly Standard writer Matt Labash and others, to turn and rend the Quitta From Wasilla like a pack of wolves who've just noticed that one of their own has come up limping.

Krauthammer piled on: "When populism becomes purely anti-intellectual, it can become unhealthy and destructive."

Asked if the GOP would remain the party of ideas if Palin captures the nomination, Will said: "The answer is emphatically no." (Somebody probably needs to tell Mr. Will: That horse left the barn a while ago.)

So is Palin's star fading in the political firmament? Are all but the most die-hard Palindrones suffering from Palin Fatigue? I sincerely hope not. That would be a disaster.

Why, you may ask, am I so unhappy about this? Don't I loathe Sarah Palin?

Nothing could be further from the truth, actually. I need Sarah Palin. I depend on her. She's an unending source of quality material.

Oh, sure, you've got your B-list wackjobs like Sharron Angle or up-and comers like Michelle "Crazy Eyes" Bachmann. But for a column that just writes itself, all I have to do is wait for Mama Grizzly to open her mouth and let the comedy ore tumble out, ready to be refined into gold.

Not only is a Palin column easy to write, I can always depend on those lovely folks in the Party of Love to whip themselves into a hate-frenzy and put those all important eyeballs on the page. As an experiment, I recently went back through some old columns on this newspaper's website and checked the reactions I got to columns that mentioned the Snowbilly Princess, as measured by comments on the column. The results were illuminating,

One on Jan. 9 entitled "Palin's Latest Weird Tangent" got 152 comments. A Jan. 16 offering called "Violent Talk in the Cross Hairs" mentioned Palin prominently. Result: 77 comments. Jan 23's "Everybody's a Drama Queen" made a passing reference to Palin's "Death Panel" lie and got 43 comments. But look at Jan. 30: "We Have Met the Enemy and He Is Us. " No Palin mention. 17 comments. Even I can do the math, if it's simple enough.

Said comments, by the way, usually include at least one instance of the tired old whine: "Why are you always picking on Sarah Palin?" The answer is: Never let it be said I don't know what the people like when it comes to getting their rage on.

If Sarah Palin slips back into the obscurity from whence she came, I don't know what I'll do. I was depending on her to at least make a run for the GOP nomination. Because if she did - well, it would just be a matter of time.