A man and a woman sat across the table from one another in a nondescript diner off the main highway. The man was older and grizzled-looking, while the woman was young and blonde, with the fresh-faced, innocent look of a high school cheerleader.

“I’ve been watching you, kid,” the man said. He saw her alarmed look and raised a hand. “Not like that. But I’ve seen you work. You’ve got instincts. You’ve got a real feel for what it takes to be a grifter, to work the big con. Once I teach you a few basic techniques, you could make a lot of money in this business. You interested?”
She leaned back in her chair, her eyes narrowed. “I’m listening,” she said.
The man ignored her cautious tone. “First,” he said, “You’ve got to show authority. People will believe anything if they think it’s coming from someone who knows. You can be wrong, dead wrong, but you can never look like you’re unsure. Never back down, never apologize, and make anyone who questions you seem like they’re the idiot. Get some guys on your crew with fancy degrees or some former military guys. Doesn’t matter if they have any idea what they’re talking about, as long as they can spin a good line of patter that supports your con.”
“Sounds expensive. And I don’t know if I want to cut that many people in on the job.”
“Kid,” the man said, “this is the big time. You can’t think small.”
The woman nodded. “OK. I guess you’re right.”
“Well, I am, but even if I wasn’t, you see how quick you were to agree with me? That’s because the key to being a confidence man — or woman — is, well, confidence.”
The woman laughed. The man noticed she was beginning to relax and smiled to himself. He was the best, and he knew what worked.
“Second,” he said, “you’ve got to use fear.”
“Fear?”
“Fear,” he said. “You’ve got to know how to scare the rubes. Make them think that someone’s getting an advantage that they’re not getting. Or that someone’s going to get what’s theirs. Fortunately for you, it’s really easy. Most people live their lives terrified of just that. They’re like that squirrel-rat creature in those “Ice Age” movies, trying to hang on to his acorn. There’s a lot of money in fear for folks like us. Which brings me to my third point.”
He held up three fingers.
“Make the mark feel like he’s something special,” he said. “Make him feel like he’s getting information from you that no one else has. Stuff that anyone but the two of you is too dumb to know or too scared to talk about. You make the mark feel like he’s part of this special group. Combine that with the whole fear thing I just talked about, and pretty soon he’ll believe it’s the two of you against everyone else.”
“Yeah,” the woman said. “I get it. Make them seem like you’re their real friend and it’s everybody else who’s the con man. Then isolate them so that your voice is the only one they hear.”
“Exactly,” the man said. “You do that right, you can get the mark to turn against his own family if he thinks they’re trying to talk him out of listening to you. If all else fails, don’t be afraid to be a bully. Anyone tries to tell the rubes something different from what you want them to hear, cut them off. Don’t let them talk.”
“Wow,” she said. “That sounds kind of … I don’t know …”
“Kid,” the man said impatiently, “what did I tell you about thinking small? This is high stakes, big-money grifting we’re talking about here. You can’t afford to be soft. Don’t tell me I was wrong about you.”
The woman thought for a long moment. In his mind’s eye, the man could almost see the wheels turning in her head until all the windows in her mental slot machine came up in dollar signs.
“So,” the man said finally. “Whaddya think?”
The blonde woman smiled. “I’m in.”
“Great,” the man said. “I think you and me are going to make a lot of money in this business, kid.”
He stood up and extended a hand.
“Welcome to Fox News.”
Posted by JD Rhoades at Saturday, May 17, 2014 0 comments 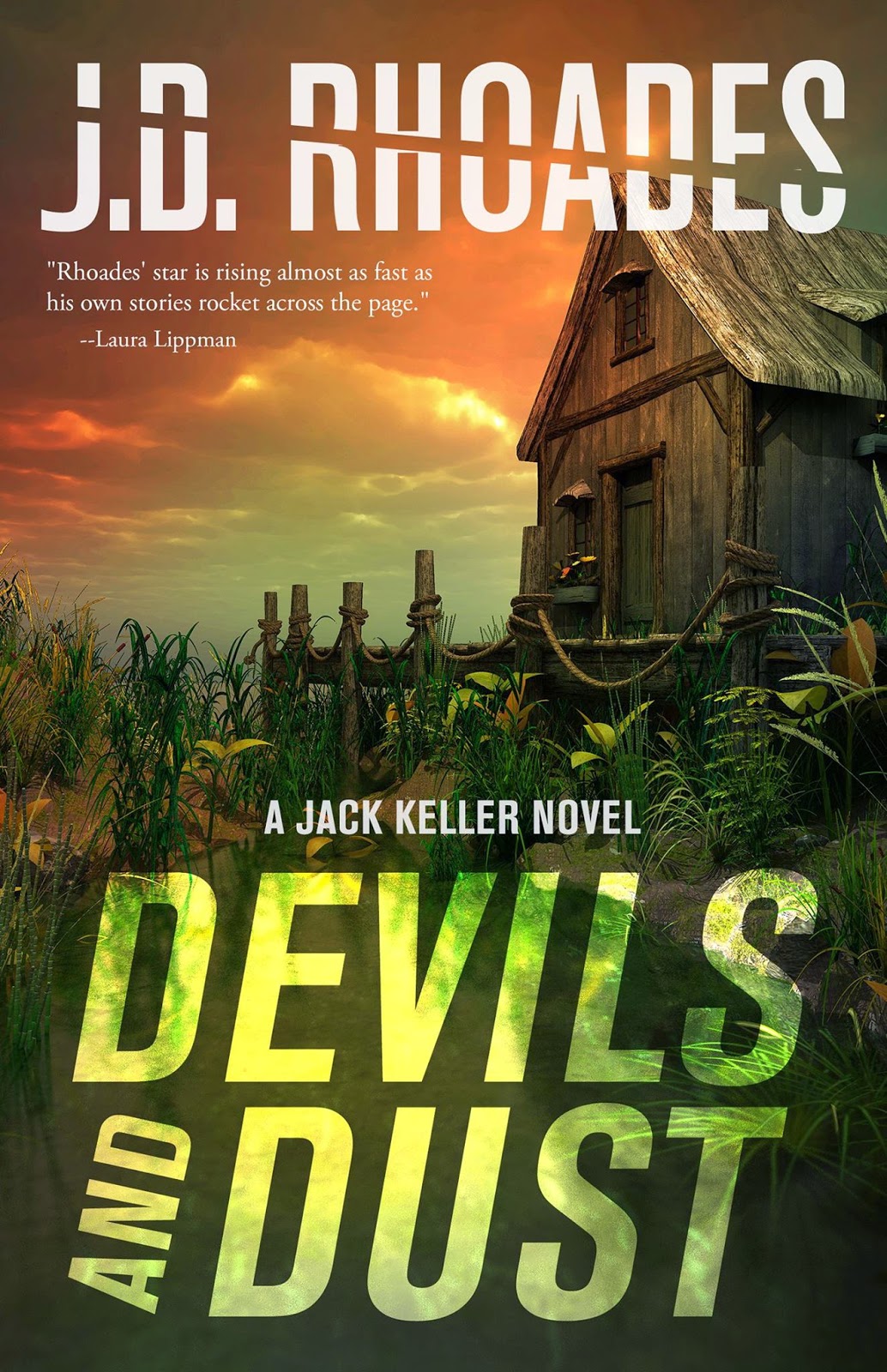 "You bring death," the voice said, "and Hell follows with you."

Keller’s been in exile, living a quiet life in the desert, since his disappearance after the cataclysmic events of 2008’s award-winning SAFE AND SOUND. Now his old friend and former employer Angela has tracked him down and needs his help. Oscar Sanchez, Angela’s husband and Keller’s best friend, has disappeared while investigating what happened to the sons he was trying to bring to America. If anyone can find Oscar, Keller can, but along the way, he has to confront his own demons and his unresolved feelings for Angela—now his best friend’s wife.

Keller’s quest takes him from a corrupt Mexican border town to a prison camp in the swamps of South Carolina and pits him against human traffickers, violent drug lords, and a vicious group of white supremacists perpetuating an evil as old as civilization itself in the name of God. All of them are about to learn a hard lesson: if Jack Keller's after you, he's bringing Hell with him.
Posted by JD Rhoades at Monday, May 12, 2014 3 comments

The Pilot Newspaper: Opinion
Another month, another Benghazi fizzle.

It seems that the Raging Republican Right is trying once again to create an administration-destroying scandal by politicizing the tragic deaths of four Americans, including Ambassador Chris Stevens, during an attack on the American Consulate in Benghazi on Sept. 11, 2012.
Problem is, every new “bombshell revelation” they come up with turns out to be a dud.
The most famous one was the “60 Minutes” story by correspondent Lara Logan, in which a supposed eyewitness with a tale of personal derring-do and betrayal on that night was revealed within days to have been a fraud who’d told an entirely different story to his employers.
After that, you’d think the Benghazi Cult would be too embarrassed to even bring it up again. But that would assume that these people have the capacity for embarrassment. Caught spreading a lie, their reflex is to just yell the lie louder and look for a new one to spread.
They thought they’d found another “smoking gun” in the testimony of retired Air Force Brig. Gen. Robert Lovell, who testified before Rep. Darrell Issa’s Kangaroo Court (aka the House Oversight and Government Reform Committee) that we “should have done more” to rescue the embattled ambassador and his staffers.
When questioned about what forces exactly were in place that could have reached the scene in time to save lives, Lovell took the Way of the Weasel: “The discussion is not in the ‘could or could not’ in relation to time, space and capability; the point is we should have tried.”
In other words, we should have tried something, even if we knew it wouldn’t work.
Nevertheless, Fox News immediately touted Lovell’s testimony as “incredibly damning.” At least until later in the day, when Rep. Gerry Connolly, a Virginia Democrat, specifically asked if Lovell was saying that “we could have, should have done a lot more than we did because we had capabilities we simply didn’t utilize.”
“That is not my testimony,” Lovell replied.
At that point, Rep. Howard “Buck” McKeon, a California Republican and chairman of the House Armed Services Committee, had to try to save the “Obama left them to die” narrative by throwing Lovell under the bus and impeaching the Republicans’ own witness.
“General Lovell did not serve in a capacity that gave him reliable insight into operational options available to commanders during the attack, nor did he offer specific courses of action not taken,” McKeon said.
On the heels of that failure came another supposed bombshell, an email released by the White House from Ben Rhodes (no relation), whose job title is “deputy national security adviser for strategic communication.” In other words, he’s a spin doctor.
His job, like the job of such PR guys in every single administration, is to try to put the most positive face on things for the president he works for. So his email suggested doing just that. He suggested several goals for U.N. Ambassador Susan Rice’s upcoming appearances on Sunday morning talk shows, one of which was “to underscore that these protests are rooted in an Internet video, and not a broader failure of policy.”
We now know that this assessment of the attacker’s motivations was incorrect, or at least incomplete. But we also know that the “attack as a reaction to the video” theory was based on actual assessments the CIA had sent the White House nine hours before the Rhodes memo. It wasn’t just made up out of whole cloth. It was wrong, but that’s the information they had at the time.
If your idea of a Great Scandal That Will Bring Down the Mighty is the revelation that a mid-level White House PR guy tried to do PR for Sunday morning shows that almost nobody watches anymore, using the information available at the time that came from the CIA — well, then, scandals just ain’t what they used to be.
What’s truly baffling and infuriating about all this that there’s plenty to criticize about what led to the deaths of four Americans in Benghazi. There are legitimate criticisms about our lack of preparation and our failure to have more assets within striking distance to deal with a sudden attack in a volatile region. There’s also the excellent question of whether we should have even been in Libya in the first place (something, you may remember, that I wasn’t in favor of).
But that’s not sexy or dramatic enough for the Benghazi Cult. They’re twisting themselves in knots trying to find some kind of base betrayal on the night of the attacks themselves or some kind of cover-up afterward.
Once again, their Obama Derangement Syndrome blinds them to a legitimate problem, which is why their Benghazi narrative never gains any traction outside the right-wing bubble.
Posted by JD Rhoades at Sunday, May 11, 2014 2 comments