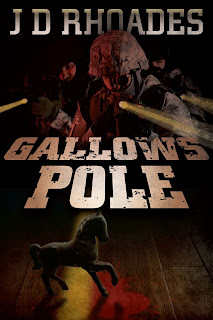 The ever-talented Jeroen ten Berge hits another one out of the park with his cover for my upcoming e-release GALLOWS POLE. It's a bit of a different look from my earlier e-books, but then, it's a somewhat different book than I've done before. Stay tuned....
Posted by JD Rhoades at Wednesday, November 09, 2011 1 comments

This past Tuesday, the United States economy was still fragile. A looming Greek debt crisis threatened to make things worse. Perhaps most tragically (judging from the wall-to-wall press coverage), someone named Kim Kardashian had just filed for divorce.
Beset by crises, it was hard to know which way to turn, which of our nation's many problems must be addressed first. But one man could see clearly what needed to be done. One man knew what required immediate action. That man was Speaker of the House John Boehner. With seconds ticking away, he and his fellow Republicans seized the moment and used it to its greatest advantage.
What step did these brave visionaries, these giants in the land, take? They boldly introduced legislation to have "In God We Trust" declared the motto of the United States.
This lightning stroke of legislative genius no doubt confused many people who thought that "In God We Trust" was already the national motto. Well, yes, it is. In fact, it's been declared the National Motto three times before: originally in 1956, then again in 2002, and once again in 2006.
The Supreme Court has upheld its use and insisted it's not an endorsement of religion. President Obama, much to the disgust of secularists, has also confirmed his support of using "In God We Trust" on our currency. The motto even hangs on the wall of the House chamber.
But apparently the Republicans in Congress have a severe case of Obsessive Compulsive Disorder, like one of those people who have to keep going back and back and back again to confirm that the stove is off and the doors are locked, so that they end up being late for everything.
"If we don't vote again for 'In God We Trust,'" they must have been thinking, "something terrible could happen. I don't know what, but ... it'd be just terrible!"
Listen, for example, to the words of Rep. Trent Franks of the great (and apparently totally crazy) state of Arizona, who asserted that without affirming our faith in God yet again, "we should just let anarchy prevail because, after all, we are just worm food." Texas Rep. Lamar Smith agreed: "There are few things Congress could do that would be more important than passing this resolution."
That last statement recalled for me the rhetoric thrown about by the movement here in North Carolina for a state constitutional amendment banning gay marriage, even though it's already explicitly illegal here.
One proponent of the amendment went on the radio and said, with what sounded like a straight face, that this was "the most important issue facing North Carolina right now." This, in a state in the throes of a massive budget crisis, still rebuilding from hurricane Irene's damage, with a 10.1 percent jobless rate.
Which led a good friend of mine to observe: "I woke up this morning to a fulfilling, full-time job, my wife's health costs are completely covered, the education system is so good that our dogs speak English and Spanish, the cat does calculus and we have a unicorn pooping Skittles in the front yard. So yes, let's go after gay marriage because everything else is 100 percent A-OK."
Anyway, the bill, to the surprise of absolutely no one, passed overwhelmingly, 396-9. And a new day dawned in America. Unfortunately, it looked just like the old day.
When the Republicans took control of the House, Majority Leader Eric Cantor declared, "Each day, we will hold ourselves accountable by asking the following questions: Are our efforts addressing job creation and the economy; are they cutting spending; and are they shrinking the size of the federal government while protecting and expanding individual liberty? If not, why are we doing it?"
Why, indeed. Maybe it's because the only "jobs bills" the Republicans can come up with are just tax cuts and more tax cuts - "solutions" which have been proven to have no effect on the jobless rate. We've had 10 years of tax cuts now, thanks to Dubbya Bush, and the economy's still struggling.

So in order to distract us from the fact that the Republican solution is to do more of the same and hope for a different result - the very definition of insanity - they spend time on easy-to-pass legislation that's already passed repeatedly. It makes them feel all righteous and panders to the religious right, but it does exactly nothing to help America.
Posted by JD Rhoades at Sunday, November 06, 2011 7 comments