After the fall of Saddam Hussein's government in April 2003, the opportunity to participate in the U.S.-led effort to reconstruct Iraq attracted all manner of Americans -- restless professionals, Arabic-speaking academics, development specialists and war-zone adventurers. But before they could go to Baghdad, they had to get past Jim O'Beirne's office in the Pentagon.

To pass muster with O'Beirne, a political appointee who screens prospective political appointees for Defense Department posts, applicants didn't need to be experts in the Middle East or in post-conflict reconstruction. What they needed to be was a member of the Republican Party.

O'Beirne's staff posed blunt questions about domestic politics: Did you vote for George W. Bush in 2000? Do you support the way the president is fighting the war on terror? Two people who sought jobs with the U.S. occupation authority said they were even asked their views on Roe v. Wade .

Many of those chosen by O'Beirne's office to work for the Coalition Provisional Authority, which ran Iraq's government from April 2003 to June 2004, lacked vital skills and experience. A 24-year-old who had never worked in finance -- but had applied for a White House job -- was sent to reopen Baghdad's stock exchange. The daughter of a prominent neoconservative commentator and a recent graduate from an evangelical university for home-schooled children were tapped to manage Iraq's $13 billion budget, even though they didn't have a background in accounting.

To recruit the people he wanted, O'Beirne sought résumés from the offices of Republican congressmen, conservative think tanks and GOP activists. He discarded applications from those his staff deemed ideologically suspect, even if the applicants possessed Arabic language skills or postwar rebuilding experience.

"I'm not here for the Iraqis," one worker noted over lunch. "I'm here for George Bush."

The Katrina debacle was not an isolated incident. Both that humanitarian disaster and the current mess in Iraq are a direct result of not just incompetence, but actual contempt for competence by this Administration. "Who cares if you know how to do the job? The important thing is that you think right thoughts. Tell me your position on abortion."

TV reality star Duane "Dog" Chapman and two co-stars on his show were arrested Thursday in Hawaii on charges of illegal detention and conspiracy in the bounty hunters' capture three years ago of a cosmetics company heir.

Chapman, son Leland Chapman and associate Timothy Chapman were taken into custody and did not resist arrest, said Mark Hanohano, U.S. Marshal for the district of Hawaii. "It went down without incident," Hanohano said.

Mona K. Wood, a publicist for the star of the popular cable series "Dog The Bounty Hunter," said Chapman would be vindicated. "He arrests the bad guys — and he is definitely not one of them," she said.

According to the rest of the story, he's been busted for jumping bail. Oh, the irony...
Posted by JD Rhoades at Friday, September 15, 2006 1 comments

Rick Santorum Hides Behind His Kids In a Political Ad:

Pennsylvania Republican Sen. Rick Santorum shows his children claiming that political opponents have criticized him 'for moving us to Washington,' and that 'they criticized us for attending a Pennsylvania public school over the Internet.' In fact, the critique was of Santorum, not his children. And the controversy was over money, not Santorum's family values.

The ad is Santorum's response to accusations by local officials that he exploited a Pennsylvania program that paid tens of thousands of dollars in tuition for his children to be educated via a publicly supported Internet charter school while the family was living in Virginia.

n the ad 13-year-old Johnny Santorum says "My dad's opponents have criticized him for moving us to Washington so we could be with him more." And 11-year-old Daniel Santorum adds that "they criticized us for attending a Pennsylvania public school over the Internet."

That misstates matters. The criticism wasn't of Santorum's children, but of the senator himself. And it was not over moving the children to be near him, nor was it about choosing "public school" or "the Internet." Rather, it concerned whether Pennsylvania taxpayers should foot a very substantial bill for the Santorum brood's education-via-Internet from a Virginia suburb of Washington, DC

(More at the link)

Lying in a campaign ad is expected. Trotting your kids out to do it for you in a cheap sympathy ploy is a half-mile below despicable.

Worth a Thousand Words 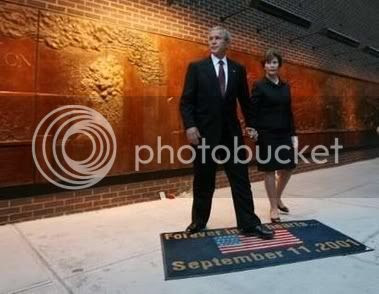 George Dubbya Bush Shows His Respect For Old Glory and the Memory of 9/11
Posted by JD Rhoades at Monday, September 11, 2006 1 comments