This Has Gotten Ridiculous, Part II

(Thanks to James Winter for turning me on to churchsigngenerator.com)
Posted by JD Rhoades at Saturday, May 20, 2006 2 comments

This Has Gotten Ridiculous

On my way in to the Big City to get new glasses today, I passed by a Christian bookstore out on the highway. The sign out front was advertising "BOOKS AND VIDEOS REFUTING THE DAVINCI CODE".

What part of "work of fiction" do y'all not understand? Do you think I really need to buy books and videos to refute a freakin' NOVEL?

I think I need to start a new line of books and videos to refute Raiders of the Lost Ark. I need to write a book asserting that the Ark of the Covenant did not, in fact, act as a weapon that "laid waste to entire regions," and that the Nazis did not, in fact, discover an ancient city buried in the desert by a sandstorm that lasted an entire year. Whaddya think?
Posted by JD Rhoades at Saturday, May 20, 2006 10 comments 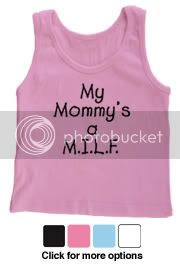 A site called Pimpfants: Baby Beaters sells "wife-beater" t-shirts like the one above, for the little gangsta in your house.

Dear God. There's so much wrong with this it's hard to know where to begin. For one thing, do they not realize what the "I" in M.I.L.F stands for?

Well, if nothing else, the post title should get me some more Google hits.
Posted by JD Rhoades at Thursday, May 18, 2006 11 comments

Like many of my fellow mystery writers and fans, I'm headed for Bouchercon this year in lovely Madison Wisconsin. I did my first B'con last year and had a blast, and I'm really looking forward to this one.

A few days ago, I got a packet in the mail with information about the 'con. With it was my ballot for the Anthony Awards, which are given out to the best work in several categories: Best Novel, Best First Novel, Best Paperback Original, Best Short Story and Best Critical/Non-fiction Work. I was a little confused at first...what time period does the award cover?

Thanks to Lee Goldberg, I now realize that it's for any work published in 2005.

My first novel, The Devils' Right Hand, was published in 2005.

FISA in One Syllable Words

Kung Fu Monkey explains it all for you.
Posted by JD Rhoades at Tuesday, May 16, 2006 1 comments

The End Times Are Upon Us

In what must be a sign of the Apocalypse, I actually agree with most of Bush's immigration speech tonight.
Okay, I didn't much care for the idea of the National Guard getting mobilized when we could spend the money on more actual Border Patrol agents. But other than that, I think, Dubbya actually made some sense.
The big points: We need to control our borders. People come here because they want to work. Demanding that we deport 11-12 million illegals is fucking ridiculous.
Bush's solutions--greater border enforcement, guest-worker programs, a difficult but achievable path to citizenship for illegals--may not be perfect, but there aren't any perfect solutions to this situation.
Mexico doesn't have jobs. We do. People want to work and earn wages. You want to stop that, you might want to warm up by going to the seaside and yelling at the tide not to come in.
Oh, and to the howler monkeys pounding their chests and hooting that the Bush citizenship plan is an "amnesty": invest in a good dictionary. Then read it. It's not amnesty if you have to work for it. And, in the long run, I don't know if it'll be used that much--after all, who the hell can afford to pay five years of back taxes?
No, George Dubbya Bush has proved the old adage that even a busted clock is right at least twice a day.
But don't worry, Georgie. I'll be back to hatin' on you tomorrow.
Posted by JD Rhoades at Monday, May 15, 2006 20 comments

Whoa-hoo, I'm Out On the Border

President Bush is set to send National Guard troops to help the Border Patrol stop illegal immigrants along the U.S.'s border with Mexico. On the one hand, well, this is one of the thing's a military's for, innit? To protect the country's borders? On the other hand, a number of questions spring to mind:

(1) Does this mean he's going to pull some of them out of Iraq?
(2) You think Dubbya might not have had to do this had he not cut the number of new Border Patrol agents from almost 10,000 to 200?
(3) Is border inderdiction really what these guys are trained for? Is this the right tool for this job? I mean you can use a screwdriver to hammer nails if you really need to, but wouldn't you be better off buying a new and better hammer in the first place?
(4) Despite Dubbya's soothing words to Mexican President Vincente Fox, doesn't any national leader have a right to express concern at the prospect of a military force massing on his border?

Of course, we can expect anyone who question Bush's cockeyed methods to be accused of opposing the worthy goal of protecting the border in the first place. But wouldn't fully funding the border security proposal by the 9/11 Commission, including hiring and training more Border Patrolmen, have made more sense?

It seems as if immigration has only suddenly become a priority for the Bush Adminsitration and, caught unprepared, they're rushing to a military solution.
Posted by JD Rhoades at Monday, May 15, 2006 2 comments

As my loyal readers remember (at least those without significant short-term memory loss), last week's column concerning plagiarism was, well, largely plagiarized. But it was all in fun, because I promised an autographed copy of my second novel, Good Day In Hell, to the first reader who could get all of the plagiarized (sorry, I meant "internalized") bits.

Well, I had quite a few entrants via the miracle of e-mail, and I can now tell you that the person who got them all was: no one. Color me amazed. Even our beloved publisher, David Woronoff, a literate and well-educated guy, didn't nail all of them.

The answers are, in order of appearance:

1. Call me Ishmael: this one should be (and was) easy. It's the opening line of Herman Melville's Moby-Dick.

2. You don't know about 19-year-old Harvard Freshman Kaavya Viswanathan without you have read a book by the name of How Opal Mehta Got Kissed, Got Wild, and Got a Life, but that ain't no matter: Paraphrases the opening lines of Huckleberry Finn.

3. It was the best of times. It was the worst of times: another one that almost everyone got. It is, of course, the opening line of Dickens' A Tale of Two Cities.

4. As conspicuous as a tarantula on a slice of angel food: From the first chapter of Raymond Chandler's Farewell, My Lovely. Hey, come on, you knew that I, of all people, had to throw in a Raymond Chandler reference.

That line was also lampooned by Ogden Nash in his poem, Very Like a Whale. Thanks to the alert reader who missed Byron but got Nash, so I gave him half a point.

8. Gone like a cool breeze: originally written by Chuck Berry in his song, You Can't Catch Me. Not strictly literature, so I didn't hold it against you if you missed it.

12. Sulking in my tent: refers to Achilles, who spent a good part of Homer's The Iliad sulking in his tent.

13. Beat on, boats against the current, borne back ceaselessly into the past is part of the last line of Fitzgerald's The Great Gatsby.

15. That's my story and I'm sticking to it: Another music reference that I didn't really hold against anyone if they missed. It's the chorus of a song written by Colin Raye and performed by Jimmy Buffett.

Anyway, while nobody got them all, it seems mean-spirited not a give the prize to the person who came closest. So, to reader Ruth Greiner from the DorothyL listeserv, congratulations! The book's on the way as soon as you send me your snail-mail address. Enjoy.

Oops! It seems that we're almost out of space. There's certainly not enough left to do justice to a political or social topic.