A young drug dealer who fancies himself a bit above it all, a bit smarter than the average thug, learns some harsh lessons at the hands of some very bad people. The book is written in first person, in such a thick British criminal argot that it took me back to the first time I read "A Clockwork Orange." Eventually, you adjust to it, though. The plot wanders a bit in the middle, but eventually it all comes together in a fast and furious climax of big fish eating little fish, only to find out that, as the man said, there's always a bigger fish. Recommended.

On this holiday weekend, of course, we remember those who gave their lives in service.

But Memorial Day also marks the beginning of the summer. With summer comes vacation (for some, at least). And with vacations comes travel. Which means it's time once again for our annual roundup of vacation destinations that are unusual, offbeat, or just plain weird.

*I have to say, I'm more than a little jealous of the folks in New Jersey (one of the few times you'll ever hear me say that). Why, you may ask? Well, they have a neat battleship memorial, just like the one we have in Wilmington. But at the U.S.S. New Jersey Battleship Memorial, you actually get to fire one of the big 16-inch guns. Sort of.

Seems that when the state cut funding for the memorial, they needed to come up with extra cash, pronto. So, for 30 bucks extra, you can climb into the turret, load the shells, pack the powder bags, load the target info into the gun's primitive computer, and pull the big brass trigger.

Sadly, one does not actually get to lob a 1,900-pound high-explosive shell at the state capital in Trenton (which might at least make the legislature reconsider the funding cuts). There is a heck of a big bang and a rumble that simulates what the gun crew must have felt, which is to say probably the biggest rush you can experience with your clothes on. (If you think that last sentence means I need to get out more, you're probably right.)

*If you've ever looked up during a camping trip or picnic and said, "You know what? There just aren't enough bugs here to suit me," then The Bugseum of New Jersey in Toms River may be just your thing. Even though they boast a collection of "thousands of beautiful and bizarre exotic insects from all over the world," the Bugseum (aka "Insectropolis") isn't just about watching our six-legged friends at work and play. Oh, no. You can "play bug games" on touch-screen computers, or crawl through their mud tube pretending to be a termite.

Seriously. They advertise this.

Before you leave, you have the opportunity to "touch a live tarantula, scorpion, millipede, and a hissing cockroach." Wheeee!


The website promises that "a world of amazing creatures awaits." If it's waiting for me, it's going to be a while.

-*If you go to Southern Illinois University in Carbondale, don't forget to visit King Tut's Pyramid. No, not that King Tut. The King Tut buried under a concrete pyramid at SIU's stadium is a dog. A saluki, in fact, which is a kind of Egyptian hunting dog allegedly favored by the pharaohs.

King Tut was the first of his breed to serve as the school's official mascot after they changed their team name to the Salukis. It's a silly name, to be sure, but better than the team's old name: The Maroons.

*The recent hit movie "Lincoln" has inspired a revival of interest in our nation's 16th president. If The Great Emancipator is one of your interests, then you have to check out the famous - or perhaps we should say notorious - Lincoln statue in front of the Bennington Museum in Bennington, Vt.

Crafted by distinguished 19th century sculptor Clyde du Vernet Hunt, the statue portrays Lincoln, draped in a knee-length cloak, as Charity. He's accompanied by the figures of Faith and Hope. So far, so good. Except that Faith is a comely young woman kneeling before Lincoln, facing him with her head at his waist level and half-wrapped in his cloak, and Hope is a nude young boy, also facing Lincoln, who has his hand fondly on the naked youth's head. 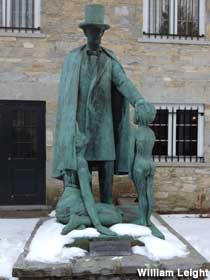 I understand that it was sculpted in a simpler, more innocent time, but to 21st century eyes, the effect is ... unsettling, to say the least.

* While you're in New England, be sure to drop by Cheshire, Mass., and check out a tribute to one really big cheese.

The Cheshire Cheese monument commemorates the accomplishments of one John Leland ("eloquent preacher, beloved pastor, influential patriot"), the crowning moment of whose life was delivering a Cheshire cheese weighing some 1,235 pounds to President Thomas Jefferson "in the presence of foreign diplomats, Supreme Court judges, and the Congress."

One can only imagine the bemusement of the assembled dignitaries when the cheese-loving cleric wheeled that monstrosity into the room. And what does the monument itself portray? A giant cheese press, of course. What else?

Wherever you're headed this summer, have fun and drive safely.
Posted by JD Rhoades at Sunday, May 26, 2013 0 comments