Well, after talking to some people who I've e-mailed lately, it seems that few or none of the e-mails I've sent in the past few days seem to have reached their destinations. None have bounced back, but no one seems to be getting them.

This is a serious pain.

I'm not sure if anyone's sent me any that haven't arrived.

If you've sent me an e-mail the past couple of days, I'm not ignoring it. I just can't seem to get an answer out, and no one seems to be home at Roadrunner.
Posted by JD Rhoades at Saturday, March 08, 2008 0 comments

(It's long, but hilarious)

You think people like this exist only in sitcoms?

Hat Tip to commenter Scott at Sadly, No! where they discuss a similar mindset among the wingnuts.

I think that most Americans have a deep-seated need to believe that if they really, really had to–if a hellish post-civilized world came to pass, and they were forced to pick up a knife/gun/katana/etc.–that they would become total badasses.

If you look at glibertaranism through that lens, it makes a lot more sense. 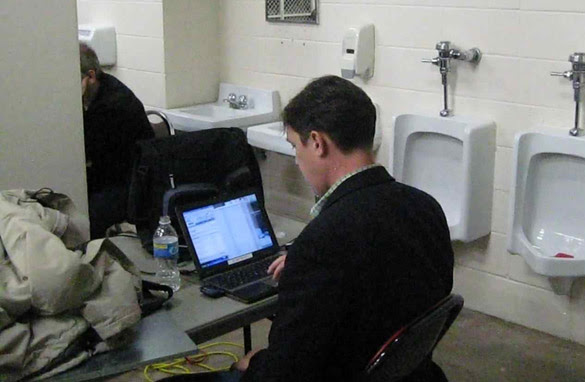 In a dispatch to the WSJ’s Washington Wire blog, Calmes reported from the workspace set aside for reporters during Clinton’s “Texas-sized townhall” yesterday evening: the men’s room of Austin’s Berger Activity Center. The five-hour-long water-closeting was the result of an apparent error (the room had been described to her as a “locker-room space,” an “abjectly apologetic” Clinton press aide, Jamie Smith, told reporters), and the press “were mostly amused” by the scene..... At one point during Water(Closet)gate, Time’s Karen Tumulty reported, “a gentleman just wandered in, expecting to use the facilities, and looked very startled to see three dozen reporters typing away on their laptops.

This, lest we forget, is the organization of the "tested, experienced, ready to go on day one" candidate.

I Am a Lucky, Lucky Man

Lynn went back to the doctor this morning. So far, so good.

I want to thank each and every one of you who commented or e-mailed to wish us well. It really brings a lump to my throat to know I have such good and caring friends. Thank you from the bottom of my heart.
Posted by JD Rhoades at Monday, March 03, 2008 9 comments

It's So Hard to Hate These Candidates

“Mr. Rhoades? The doctor will see you now.”

“Dusty, mein boy. Come in and haff a zeet. Tell Herr Doktor vot is troublink you.”

“Well, for one thing, Doc, that accent’s a little much.”

“Vot do you mean? All psychiatrists are supposed to haff der Viennese accent.”

“Ummm…Doctor Cho, you’re Asian. And you told me you were born in .”

“I know, Dusty, I know. All the divisiveness of the past few years, I can understand how it would get you down…”

“No, Doc, you don’t get it. I don’t hate any of the candidates right now.”

“Look, I’m a columnist, right? A liberal one. I’m supposed to be filled with hate. Don’t you read the letters to the editor?”

“It’s even in the handbook.”

“You guys have a handbook?”

“All liberal columnists are required to hate the flag, hate and anyone who’s not as liberal as they are.”

“Wow. I always thought that was just right wing propaganda.”

“Nope. All true. And there’s my problem. I need to get good and angry in order to write, and I just can’t bring myself to hate any of these guys.”

“Oh, don’t get me wrong. I disagree with the guy. Strongly. He says he doesn’t mind if we stay in another thousand years, and I bloody well do. But check this news story out.”

“This right wing talk show host introducing McCain kept bringing up Obama’s middle name, Hussein, and calling him a ‘hack politician from .’ And you know what McCain did? “He came out and apologized! He said that he didn’t agree with the talk show host, that Obama and Hillary Clinton were ‘honorable Americans’ and that he was going to keep referring to them with respect.”

“I don’t get it, Dusty.. Isn’t this something you’ve been calling on Republicans to do for a couple of years? To distance themselves from their crazier supporters’ harsh rhetoric, just like people are always demanding Democratic politicians do?”

“But Doc, I never thought they’d actually DO it! How am I supposed to hate this guy?”

“Well, what about Hillary Clinton? Isn’t she the most divisive figure in American politics?”

“Pfft. Don’t believe everything you read, Doc. Hillary Clinton is only thought of as "divisive" because a few loudmouthed Republicans never got over losing the 1992 election to her husband. He’s not around anymore, so they hate her in his place.”

“I thought you called her ‘Republican Lite.”

“And I meant it. But it’s hard not to take up her side when you look at some of the ridiculous B.S. that’s been leveled against her, like that whole stupid ‘did she tip the waitress’ thing, and the whole ‘did she cry or didn’t she’ malarkey…”

“That was pretty silly.”

“Absolutely. And you know how all these people in the press are griping that Barack Obama is inspiring but not ‘specific” enough about his policies?”

“Well check this piece out from the Post. Their reporter E.J. Dionne talks about how, and I quote: ‘as Hillary Clinton droned on learnedly about health care, family and medical leave, and global warming, a colleague in the press section leaned over to dismiss her for offering nothing but ‘a laundry list of wonkery.’”

“So, it’s the old ‘heads we win, tails you lose’ nonsense the press has been running on the Democrats since the 90’s! Get specific, you’re boring, get inspiring, you’re vague!”

“Remember Al Gore? When he started talking detailed policy objectives, they made fun of him for being wooden! But when he got fired up, suddenly all these pundits were saying he’d gone off the deep end, he was going crazy!”

“I think we’re getting somewhere here.”

“Look, you can’t write unless you’re ticked off, right?”

“Who do you think? These idiots in the so-called ‘liberal’ media! Liberal! Hah! What a joke. Soulless bunch of corporate drones is what they are…oh.”

“Now you’re getting it.”

“They’re petty, and stupid, and they concentrate on style over substance, and obsess over Obama’s middle name,, and they want us to pick the leader of the Free World based on whether or not we’d like to have a beer with him or her and…they…they…wow! Thanks, Doc! I feel really, really angry now! I can write again!”