Down By the Seaside, Redux 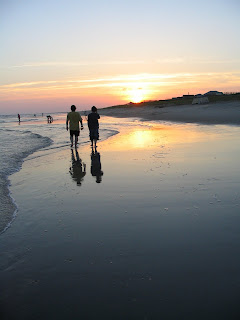 The WIP has been sent to my agent. My watch is off. Off to the shore for a bit to hang with the fambly. See ya later...be excellent to one another.

(Oh, and if anyone reading this is inclined to take advantage: I live across the street from one cop, down the street from another, and next door to the former mayor's house. It's a pretty well patrolled area. )
Posted by JD Rhoades at Saturday, June 14, 2008 0 comments

The Two Craziest Days of Your Working Life

I hate this fucking Work In Progress so much right now. It's all I can do not to delete every vestige of it from every computer, every backup drive, every place it might conceivably be.

Which means the rewrites are probably finished.

It's time to send it to my agent, then go sit on a beach with someone else's book and a big drink for a week.

After which I'll be able to look at it again.
Posted by JD Rhoades at Thursday, June 12, 2008 2 comments

Over at Lee Lofland's excellent blog The Graveyard Shift, I talk about what you do as a lawyer when your client is not only the one who done it, but the State has a good chance of proving it. Check it out.
Posted by JD Rhoades at Thursday, June 12, 2008 0 comments

Bleak House Books is coming out with some great stuff, like Anthony Neil Smith's YELLOW MEDICINE and Nathan Singer's IN THE LIGHT OF YOU. So it was a particular honor for me when Ben LeRoy, one of the dynamic duo who runs the joint, asked me to do a podcast for their website. Check it out....
Posted by JD Rhoades at Tuesday, June 10, 2008 1 comments 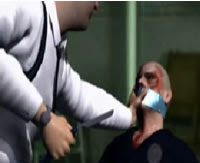 My son just showed me something I have a little trouble wrapping my head around.

There is a Reservoir Dogs Playstation 2 game.

As a big fan of that movie, I have one question:

Let me just say from the outset that I don't regard former White House mouthpiece Scott McClellan as any kind of hero for his "tell all" memoir, any more than I regard anyone who snitches on a gang of crooks as a hero. He should never have been hanging out with the crooks in the first place.

And it should come as no surprise to the pudgy, sweaty little weasel who told some of the Bush mis-administration's most egregious whoppers with a straight face that the usual suspects are hitting the talk show circuit and running the classic plays on him. After all, he helped write the playbook.

Some of those tired old talking points reveal just how ethically and intellectually bankrupt the Bushistas are, and how it's impossible to look back on George W. Bush's solemn pledge that he was going to be the one to "restore honor and dignity to the White House" as anything but a particularly sick joke.

Those by-now-clichéd lines form a special language all their own, a language spoken by every embezzler, fraudster, and disgraced CEO who's ever done, or ever deserved to do, a perp-walk.

"McClellan's just a disgruntled employee!" This is the golden oldie that's been thrown at every whistleblower.

Now, I'm just a simple guy, but it seems to me that if you've got this many rats jumping off, there's something wrong with the ship.

Let me just ask: Are there any "gruntled" employees left at the White House?

"Why, all of a sudden, if he had all these grave concerns, did he not raise these sooner?": This one is particularly sweet to hear used on Scotty, because it's exactly what McClellan himself said about Richard Clarke when Clarke pointed out what a massive botch the Bushistas had made of the war on terror by ignoring the warnings of a significant terrorist attack in the works in the months leading up to 9/11.

(Remember the "bin Laden determined to attack in U.S." memo? Bet they wish you didn't.) In English, this translates to "Why didn't he speak up against our malfeasance while he was helping us commit it?" Because, as we know, the Bush administration has always been so open to dissenting ideas.

"McClellan sounds like a left-wing blogger!": Ever notice how more and more former Bushistas are sounding like "liberals"? Maybe because that's the sound of people actually telling the truth.

"We've heard all of this before, this is nothing new": It really blows my mind that anyone, even the most berserk right-winger, could consider this a defense.

It is true that a lot of people, including Bush insiders, have noted that the Iraq War was a "strategic blunder," that the administration "lacked candor and honesty" in the way they sold the war to us, and that they were in a "state of denial" about the debacle that was their response to Hurricane Katrina.

But what is it called when a dozen witnesses tell the same story?

Well, we in the law biz call it "corroboration."

Of course, those authors tend to make the best-seller lists with a "dagger," a little icon by their title that indicates that booksellers are reporting large, multiple copy "bulk buys" meant for the express purpose of getting the book on the list.

Seems to me that if McClellan was only trying to get rich, he'd have gone with a publisher who'd get him on the lists by hook or by crook, rather than the small Public Affairs Press, which is notorious in the publishing world for its modest advances.

There's an old saying that "when you throw a rock into a pack of dogs, the one that yelps loudest is the one you hit." Judging from the reaction to Scott McClellan's book, it was one big rock that hit a lot of dogs.
Posted by JD Rhoades at Sunday, June 08, 2008 3 comments