Happy Sunday, friends, and welcome to “This Week in Twitrage,” where once again we report on people’s propensity to go off half-cocked (sometimes as little as one-quarter or one-eighth cocked) and take to the Internet like Cheeto-stained Paul Reveres to spread the alarm about some outrageous story they’ve heard.

Said story, more often than not, turns out to be a total hoax, fabrication, half-truth or crazy rumor being reported as fact by our incredibly credulous news media.
Last week was a fertile one for Twitrage, what with the continued fallout from the Charleston terrorist attack, the controversy over the Confederate battle flag, and the Supreme Court’s bombshell decision upholding the right of same-sex couples to marry.
First, there was the picture making the rounds on Twitter and Facebook after Amazon.com, among other retailers, announced that it was pulling Confederate flag merchandise off its site.
This latest expression of Neo-Confederate butthurt claimed, and I quote: “You can’t buy a Confederate flag on Amazon, but you can buy this ISIS flag,” followed by a supposed screenshot of an Amazon page offering to sell one of the terrorist group’s amateurishly designed black and white flags. And the thing wasn’t even eligible for Free Amazon Prime shipping. The nerve! 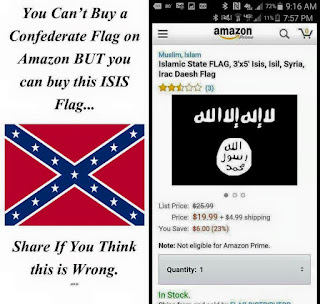 Pretty outrageous, huh? If you can purchase one symbol of a group violently hostile to the United States, why shouldn’t you be able to grab another, right? Well, as it turns out, you can’t buy either on Amazon. I myself did a search for “ISIS Flag,” “ISIL Flag,” “Islamic State Flag” and “Daesh Flag” (hey, I’m already probably on a half-dozen watch lists, so what harm can it do now?)
No results. The folks at the urban legends site Snopes.com dug a little deeper and found an archived page for a vendor selling ISIS flags that went up in May — and was quickly taken down. So no, as of right now, you cannot buy either a Confederate flag or an ISIS flag on Amazon.
Then there’s Don Stair of Little Rock, Ark., who was mightily offended by the actions of his local TV station when they adorned their logo with what he called the “gay colors” of the Rainbow Flag after the Supreme Court’s historic decision. “Just stay out of it,” Don tweeted furiously.
Problem is, the station in question, KARK-TV, is an NBC affiliate, the logo in question is the NBC peacock, and that rainbow color scheme has always been part of it.
I recall it as far back as my own childhood, when the network used the Bird (as it called it) to tout that its programming was presented “in living color!”

Hey — who knows? — maybe they were all gayed up back then, too.
The left had its own episode of Twitrage over the alleged “coddling” of accused (and admitted) Charleston church shooter Dylann Roof. In particular, people were unhappy with reports that Roof, who’s white, had been “taken to Burger King” on his way to the police station after being apprehended. They point out that a lot of the black suspects we hear about lately have tended to get shot, asphyxiated, slammed around inside of police vans, and otherwise killed. And this murderer gets to “have it his way”?
Well, as it turns out, Roof wasn’t exactly taken to the drive-through and given a gift card. Some officer may have gone and gotten Roof a burger while he was locked in a conference room in the Shelby, N.C., Police Department waiting for the feds and the Charleston police to arrive, but you know what? That’s not all that unusual, especially with a subject you’d really like to get a confession from.
And let’s face it, you can’t just starve prisoners in your custody, even ones accused of mass murder. So once again, there’s less to this “outrage” than meets the eye.
Look, folks, “I saw something on the Internet” is not a reason to automatically get your dander up. I’ve seen pictures of rabbits with antelope horns and a video of a little gray alien peeking in a man’s window on the Internet, too. It doesn’t mean we have to believe in either of those things.
The World Wide Web is full of useful information. It’s also full of useless and dangerous lies. Take the time to keep calm, do the research, and learn which is which.
Posted by JD Rhoades at Tuesday, July 07, 2015 0 comments