Everyone Wants To Be a Holocaust Victim These Days

Dear Lord, here we go again. It seems that a battle is brewing out there as to who gets to claim the honor of comparing themselves to Jews in the Holocaust.
You can’t hardly turn around these days without encountering some right-winger claiming that Obamacare, or legal abortion, or whatever it is that grinds their particular gears, is just like the suffering of the millions who were crammed into camps to be worked, starved, and/or gassed to death.
The latest entry in the I-wanna-be-a-Jew stakes is billionaire venture capitalist Tom Perkins.
Perkins asserted in a now-infamous letter to The Wall Street Journal that, thanks to the Occupy movement and the nasty things said in his local paper about his rich buddies, he needed to “call attention to the parallels of fascist Nazi Germany to its war on its ‘1 percent,’ namely its Jews, to the progressive war on the American 1 percent, namely the ‘rich.’”
He went on to grouse about nasty things people had said about his wife, best-selling novelist Danielle Steele, then wound up with this jaw-dropper: “This is a very dangerous drift in our American thinking. Kristallnacht was unthinkable in 1930; is its descendant “progressive” radicalism unthinkable now?”
In case you didn’t get the reference, Kristallnacht (“Night of Broken Glass”) was a series of coordinated attacks against Jewish homes and businesses in Germany and Austria in 1938.
It resulted in the immediate deaths of 91 Jews, the arrest and incarceration of 30,000 Jews in concentration camps, the destruction of an estimated 7,000 Jewish businesses, and the burning of more than 1,000 synagogues.
As far as I know, neither Mr. Perkins nor any of his fellow 1-percenters has suffered anything more than hurt feelings. We should not, however, let that get in the way of a nationally published snit from a privileged drama queen and his novelist wife.
Friends, I see a crisis a-brewin’. Not for Mr. Perkins, mind you. I think he’ll be fine. But if all sorts of different people keep claiming they’re the moral equivalent of Holocaust victims, pretty soon there really is going to be conflict.
I suppose we could convene some sort of blue-ribbon panel to decide who gets the “our suffering is just like the German Jews of the 1930’s-40s” award. But that could lead to more hurt feelings, and since hurt feelings equal the Holocaust to these people, that’ll just put us back to square one.
I’ve suggested before that maybe the professionally aggrieved need to come up with some other atrocity to which they can equate their particular butthurt. So far, they seem unable to do so. So here are some other things the right and the “1 percent” can claim their suffering is equal to:
— The St. Bartholomew’s Day Massacre: Supposedly instigated by Catherine de Medici, Mother of King Charles IX of France, this 1572 killing of French Protestants ended with up to 70,000 people dead. 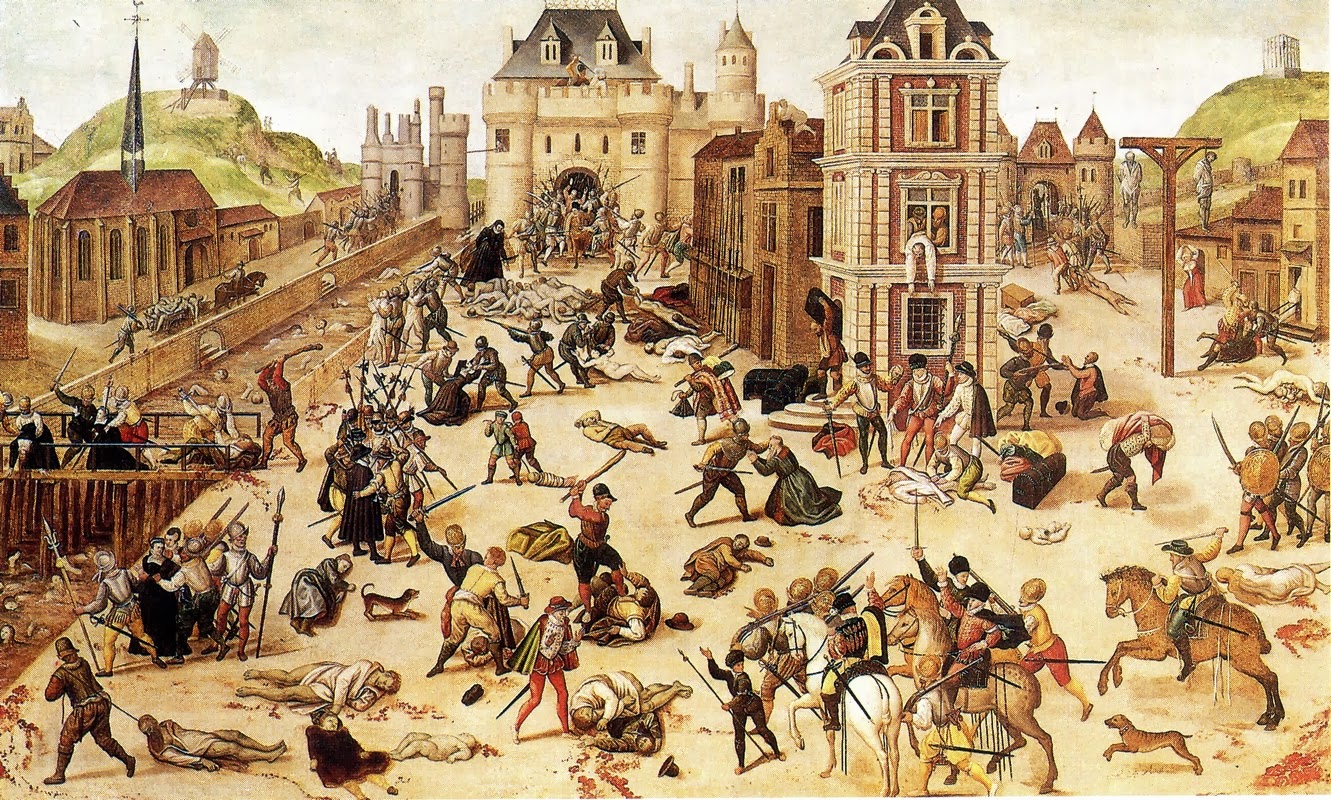 Upside: since many of the dead were aristocrats, the 1-percenters can probably figure out a way to draw some parallel that will make at least as much sense as Kristallnacht. Downside: it’s a little far removed, historically speaking.
—The Cambodian Killing Fields: At the end of the Cambodian Civil War, dictator Pol Pot and his Khmer Rouge went on a rampage of vengeance against just about everyone they figured was connected with the former regime: professionals, intellectuals (a group which included anyone who wore glasses), Buddhist monks, you name it. By the end, more than 2.5 million had been executed and buried in mass graves.
Upside: It’s recent enough for people to recognize the reference. There was even a movie. Downside: some of the dead were intellectuals, like college professors and scientists, and the right’s not crazy about them either.
— The Congo Free State: In the late 1800s, King Leopold of Belgium turned the Congo into a collection of private concessions and demanded a “labor tax” on the natives, which essentially reduced them to slaves feeding Europe’s growing hunger for the region’s rubber. Up to 8 million died in the ensuing rebellion, their hands cut off by soldiers to prove to the military authorities that they had made a real kill and hadn’t wasted bullets.
Upside: the right loves to equate taxation with slavery. Downside: they do love them some privatization.
Huguenots, Cambodians, Congolese — these are just some of the millions of real victims the wingnuts and billionaires could compare themselves to, if only they’d expand their imaginations and do the research. And yet we keep getting the same lame comparisons to the Holocaust.
America deserves better from its self-pitying oligarchs and crybaby dead-ender politicians.
Posted by JD Rhoades at Sunday, February 02, 2014 4 comments