If you're one of the few people I know who hasn't heard this announcement already, BROKEN SHIELD, my new e-book for Kindle, is now available. More formats, including print, will be forthcoming. 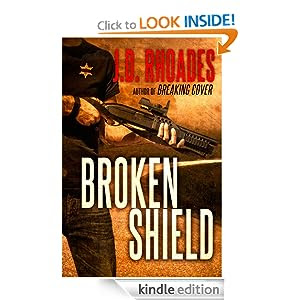 Cool cover, no? It's by my friend Robert Gregory Browne.

Buckthorn and his beloved hometown of Pine Lake thought they'd seen the last of FBI agent Tony Wolf. But when evidence of a kidnapping literally falls from the sky, Wolf returns to assist in the search for an abducted young girl.

Buckthorn, Wolf, and brilliant FBI prodigy Leila Dushane race against the clock to piece the clues together. When the evil they find follows them home, Pine Lake once again suffers terrible tragedy at the hands of violent and lawless men. Tim Buckthorn, who's lived his life as a sworn officer of the law, will have to cross every line he ever knew on a quest to protect the people and the place he loves.

"I loved this emotionally riveting collision of good and evil in a small Southern town. Rhoades always melds action, character and suspense into a seamless and unforgettable ride."-Alexandra Sokoloff, award-winning author of THE HARROWING and the Huntress Series

“A blistering follow-up to BREAKING COVER. The prose is fast and smart, the pace frantic and the characters driven, dangerous and yet full of heart. BROKEN SHIELD reaffirms JD Rhoades’ position as the king of redneck noir.” -Zoë Sharp, author of the Charlie Fox crime thriller series

"J.D. Rhoades introduced Tim Buckthorn in Breaking Cover. Now, in the searing prose of Broken Shield, Rhoades shows us he has created a character who can stand tall alongside Jack Reacher and Harry Bosch."-Keith Raffel, bestselling author of DOT DEAD, DROP BY DROP, and A FINE AND DANGEROUS SEASON

Steve Bouser's columns don't usually cause me alarm, but the one he wrote for this past Wednesday's paper, about the number of people getting more and more of their news from social media, certainly did.

This is not because I dislike or fear Facebook, Twitter, Tumblr and the like. Truth be told, I probably spend a lot more time on those things than I should.

(In my defense, I first got on Facebook because my literary agent at the time told me all the other writers were doing it, and it was a cheap and easy way to present myself to my audience. So now, a few years and 5,000 Facebook friends later, I justify the time wasted - sorry, spent - by claiming I'm marketing. A flimsy rationalization, but it's the only one I have.)

No, it's not an aversion to social media that alarms me when I hear that 19 percent of all Americans, and a whopping 33 percent of those under 30, get some or all of their news from social networks like Facebook or Twitter. I'm alarmed because I know those networks so well. I know them well enough not to trust them.

Twitter in particular is a classic example of the old maxim that you can determine the collective IQ of a group by taking the IQ of the dumbest person in it, and dividing it by the number of people in the group.

Not that there aren't some bright and fascinating people on Twitter. I "follow" very smart folks like astrophysicist Neil deGrasse Tyson, talented ones like writers John Scalzi and Neil Gaiman, and entertaining ones like actress and geek-goddess Felicia Day. A lot of my far-flung cadre of friends in the writing business are on Twitter, and an evening spent tweeting back and forth with them is like being present at a great literary cocktail party. Except at a cocktail party, I'm usually dressed. Usually. There was that time in Milwaukee ... never mind.

But Twitter is also full of idiots, crackpots and the chronically ignorant. Twitter is the place where, after it was revealed that the Boston Marathon bombers were from Chechnya, thousands of calls went up for the U.S. to start bombing ... the Czech Republic.

So many, in fact, that the Czech ambassador actually had to issue a statement on the embassy website, noting "in the social media a most unfortunate misunderstanding" and reminding Americans that "the Czech Republic and Chechnya are two very different entities - the Czech Republic is a Central European country; Chechnya is a part of the Russian Federation."

He did not add "you freaking imbeciles," which is what I would have done. This is probably why I'm not an ambassador.

By the way, other tweets and Facebook posts claiming that failed VP candidate and reality TV star Sarah Palin was one of those calling for an invasion of the Czech Republic and "other Arab countries" turned out to be untrue was well. Those tweets linked to a joke "story" in the online satirical newspaper The Daily Currant.

Perhaps more ominously, Twitter in particular has shown itself to be highly vulnerable to hacking and the hijacking of supposedly reliable news sources to spread misinformation by pranksters or more serious political dirty tricksters.

Just last week, the Associated Press Twitter account was taken over by hackers who posted that a bomb had gone off at the White House and that President Obama had been injured. Some tweeters immediately cried "shenanigans,", and AP took the account down quickly, but not before the Dow Jones Industrial average plunged 140 points in the space of a few minutes.

A group calling itself the "Syrian Electronic Army" claimed responsibility for the hack, but one can't help but wonder if perhaps some clever stock speculator was doing some short selling before having a hacker buddy send the Dow into a spin. But that's just the way my mind works after years of reading conspiracy thrillers.

As we discussed last week, you can't always trust the TV news to bring you the latest facts, since they've now collectively decided that passing on unconfirmed and often anonymous "reports" (aka rumors, conjectures and general BS) is a substitute for actual journalism. But trusting social media is even riskier.

So what are we to do? Well, my advice is to look at a lot of different sources. Also, never believe the first thing you read or hear. Skepticism isn't a perfect system, but it'll have to do.
Posted by JD Rhoades at Sunday, April 28, 2013 2 comments