OK, this whole drone thing is getting out of hand.

You may recall that, back during the U.S. Open, I wrote with some amusement about the Pinehurst Village Council’s attempts to ban drones from the event. Seems they might have been more prescient than I thought. A recent spate of news stories makes one think that drones are moving from the category of “expensive toy for people with more money than sense” to the category of “menace.”
Take, for example, an item from fire-ravaged Southern California. According to NBC Los Angeles, the efforts of firefighters battling the so-called “North Fire” were hampered when planes deployed to dump water and chemicals on it were forced away from the blaze by no fewer than five drones of unknown origin hovering in the area (no doubt to take pictures or videos).
“This is serious,” said John Miller of the U.S. Forest Service. “[Aircraft] can strike one of these things and one of our aircraft could go down, killing the firefighters in the air.” One fire captain said the drone-caused delay “definitely contributed” to the fire’s jumping of the 15 Freeway.
On a less catastrophic but still disturbing note, there’s the story of William Merideth, from Hillview, Kentucky. Merideth apparently took exception to someone flying a drone over his property (and, according to some accounts, ogling his teenage daughter sunning herself on the deck).
“When he came down with a video camera right over my back deck, that’s not going to work,” Merideth said. To illustrate just how much that wasn’t going to work, he blasted the little buzzing nuisance out of the sky with his shotgun. A few minutes later, according to Merideth, a carful of angry men pulled up, with one demanding if he was “the [bad word] who shot my drone.” In traditional Kentucky fashion, Merideth met the group with his Glock on his hip, declaring, “If you cross that sidewalk onto my property, there’s going to be another shooting.”
Unfortunately, Merideth ended up being the one arrested, charged with “criminal mischief” and “wanton endangerment.” He’s vowed to fight the charges in court. “What other recourse do we have?” he asks.
This is one of those areas in which the law simply hasn’t kept up with issues raised by modern technology. We’ve never really had to deal, for example, with the question of just how high up your property line goes. No one would seriously claim an airliner flying at 10,000 feet over your house is trespassing. But what about a drone hovering over your yard at 50 feet, snapping pictures? Exactly how much force are you allowed to use to keep some jackass from annoying, harassing, or otherwise being a jerk with his new $1,500 quad copter?
Not much, it appears, since the National Transportation Safety Board recently ruled that even private drones are considered aircraft, and therefore subject to FAA regulation. As you might imagine, shooting down an aircraft is a pretty serious crime, with penalties of up to 20 years in prison, and the law doesn’t currently seem to make any distinction if said “aircraft” is some dude-bro’s expensive toy.
No one’s been prosecuted yet under federal law for dronecide, and an FAA spokesman has opined that that would be more of a “destruction of personal property issue and out of our jurisdiction.” However, we are talking about a federal bureaucracy here, so anything’s possible, especially if it’s stupid. Meanwhile, the California legislature is trying to catch up; they’re considering a bill to allow firefighters to “disable” drones that are getting in their way.
In light of the Drone Menace, a variety of companies have jumped in to answer Mr. Merideth’s question, “What recourse do we have?” Idaho’s Snake River Shooting Products has begun marketing a special “Drone Munition” shotgun shell. “Prepare for the Drone Apocalypse!” their advertising blares, alongside pictures of threatening drones hovering nearby with glowing red “eyes.” 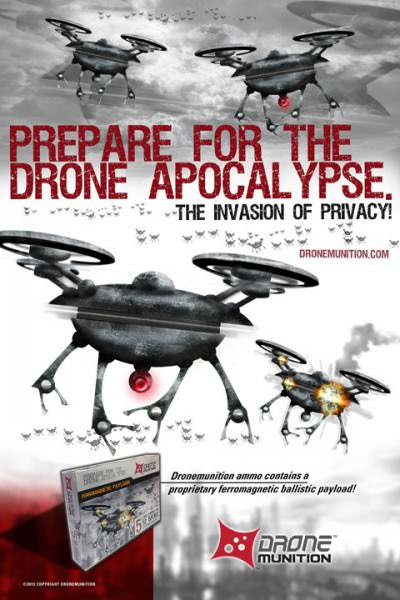 A company called Droneshield can sell you a “net gun” to snag drones out of the sky. If you really want to go whole hog, the German company MBDA has tested a “laser effector to acquire, track and defeat a free-flying mini-drone.” It’ll probably only set you back a few million. It should be noted, however, that the FAA also frowns on you turning a flying object into a couple hundred pounds of flaming wreckage over populated areas.
As few as five years ago, if you’d told me that clueless goobers flying hopped-up toy helicopters controlled by their cellphones would even be a thing, let alone a societal problem, I’d have laughed in your face. But these are the times we live in. What next?
Posted by JD Rhoades at Tuesday, August 25, 2015 0 comments