Can't Help Themselves, It's a New Religion 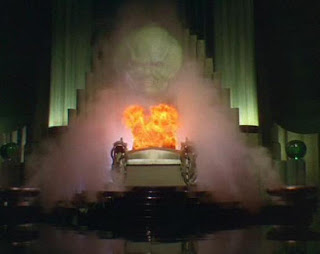 "Just relax," the second one said as he knocked on the door. "We'll be fine."

"I don't know, Michael," the first man said. "He can get pretty cranky. You really won't like what happens when he gets cranky."

A shutter opened at eye level in the great iron door, and a face peered out. "Who knocks?" a voice demanded.

There was a pause. "Hoo-boy," the voice said. "You guys are in a lot of trouble."

They were in a long, high-ceilinged hall with columns running down either side. The hall was dimly lit by torches set into the columns. At the far end of the hall, a shadowy figure sat on a darkened throne.

Flames shot up from behind a throne, thunder rolled, and a booming voice filled the great hall. "WHO COMES BEFORE ME?"

"Nobody, really," Sanford said. "Nobody at all." Then he threw himself on the floor. "Please, Mr. Limbaugh!" he begged. "Please don't hurt us!"

"SO," the voice said, "MR. STEELE. I HEARD YOU'VE BEEN SAYING THAT I'M JUST AN ENTERTAINER. THAT I'M...WHAT WAS IT YOU SAID?"

"COME ON, MIKEY," the voice sneered. "SURELY YOU REMEMBER?"

"I said," Steele muttered, his eyes downcast, "that you were incendiary."

"AND SANFORD! YOU SAID ANYONE WHO WANTED OBAMA TO FAIL WAS AN IDIOT! WELL, I WANT HIM TO FAIL! DOES THAT MAKE ME AN IDIOT? DOES IT? HMMMMMMMMMM?"

Sanford didn't answer. He had fainted.

"OBVIOUSLY NOT," the voice thundered. "REMEMBER, I ONLY DO WHAT THE DEMOCRAT PARTY DID WHEN BUSH WAS PRESIDENT."

"YES! THE LIBERAL TRAITORS IN THE DEMOCRAT PARTY SAID THEY WANTED THE PRESIDENT TO FAIL!"

"I'm glad you brought that up, sir," Steele said. "Because we've looked through all the tapes and archives, and we can't find anything with any Democratic Party leaders...."

"IT'S DEMOCRAT PARTY, NOT DEMOCRATIC! YOU MUST NEVER CALL THEM BY THEIR RIGHT NAME.."

"IT ANNOYS THEM. THAT WHICH ANNOYS LIBERALS IS GOOD POLICY, THOUGH THE UNBELIEVERS CALL IT CHILDISH. I HAVE SPOKEN."

"Yes, sir. Anyway, we couldn't find any Democrat leaders saying they wanted President Bush to fail. There was a lot of criticism of tax cuts, and later of the war, but ...

Thunder rolled. "YOU DARE TO QUESTION THE GREAT AND POWERFUL RUSH!?"

"Oh, no sire," Steele said quickly. "Not at all. In fact, Great One, we're relying on your superior brain and your most excellent and precise memory. So can you, who is the fount of all things Republican, tell us exactly which Democrat actually said they wanted Bush to fail? So we can take your wisdom back to your followers."

"DO NOT TROUBLE ME WITH DETAILS!" the voice bellowed. "I HAVE 25 MILLION LISTENERS!"

"MATH?" the voice rose in rage and the shadowy figure rose from the throne. "KNOW YOU NOT THAT NUMBERS THEMSELVES HAVE A LIBERAL BIAS, SO LONG AS THEY ARE NOT IN MY FAVOR!?"

"YOU WISH MY MERCY?"

"THEN BRING OBAMA BEFORE ME!"

"BRING HIM TO ME! I WOULD DEBATE THE USURPER!"

Sanford was sitting up, blinking. "The president of the United States, debate a radio host? That's ... "

"BEGONE THEN, AND LET YOUR PUBLIC GROVELING COMMENCE!"

"Yes, Lord Rush," both men said, bowing and scraping as they backed out of the hall. The lights came up to reveal an obese, sweaty, balding man seated on a tin throne, next to a microphone, which he switched off. "Snerdley!" he called. "My medicine!"

A minion scurried up, bearing a colorful mixture of pills on a silver platter. "You really showed them who the boss is, sir!" he said obsequiously.

The fat man scooped up a handful of the pills and popped them in his mouth. "I did, didn't I?" he mused.

"They'll be back in the majority in no time with your brilliant leadership."

"Majority?" the fat man said absent-mindedly. "Yes, of course, their majority. Do you have the new ratings figures?"

"Yes, sir." The minion handed over a sheaf of papers, which the fat man perused.

Hellions: I Need a Word!

So my kids are in the other room watching TV, and suddenly, they're laughing and mockingly singing the themes to "Charles In Charge", then "The Facts of Life."

But here's the thing: these kids, I know, have never seen either of these lame sitcoms. Their entire knowledge comes from these shows being satirized by other shows, such as Scrubs, in which a character sang in a barbershop quartet that performed only old TV themes.

Likewise, when my son and I watched Casablanca the other night, he noted that, even though he'd never seen it before, he knew all the good lines, becuase they'd been referenced so many times. I've never seen Titanic all the way through, but I know it through stuff like this:


So, I need the collective wisdom of my Hellions here: what do you call the phenomenon where someone knows a movie, TV show or what have you, not through actually seeing it, but through seeing it referenced?
Posted by JD Rhoades at Friday, March 06, 2009 18 comments

Email ThisBlogThis!Share to TwitterShare to FacebookShare to Pinterest
Labels: words

Groveling to the bloated, sweaty, bloviating drug addict who is the de facto leader of the GOP has never been easier, with the Republican Apology Machine.  Join the tattered remnants of the Republican Party as they strive to narrow their appeal even further!
Remember, Rush claims 20 million listeners and 65 million people voted for Barack Obama, but math, as we know, has a well-known liberal bias.
Posted by JD Rhoades at Wednesday, March 04, 2009 22 comments

Jindal's Last Stand; Fighting to the Last Drop of Someone Else's Blood

Well, the economic stimulus has passed, despite the loud opposition of prominent Republicans. But they're not giving up.

In fact, it seems that some Republican governors like Louisiana's Bobby Jindal are making noises about actually turning down the money coming from the government.

According to the online journal Human Events, which styles itself "the Headquarters of the Conservative Underground" (no, really, and I think they're serious): "State governors -- looking down the gun barrel of long-term spending forced on them by the Obama 'stimulus' plan -- are saying they will refuse to take the money. This is a constitutional confrontation between the federal government and the states unlike any in our time."

VOICEOVER: A messenger came to my governor one day. An emissary from Obama, whom some called a god-king.

MESSENGER: Oh, hi, Governor. My name is Elmer Hadley, and I'm from Washington. I'm here to deliver your stimulus check?

JINDAL: Choose your next words carefully, Washingtonian. They may be your last!

MESSENGER: What? Oh. Ha-ha! What a kidder. Funniest darn thing. We mailed the stimulus check and some guy sent it back all torn up. So President Obama thought he'd have me bring it personally.

JINDAL: Take this message back to your master, Washingtonian!

MESSENGER: Message, Governor? I'd be glad to, but I could just give you the e-mail address for the president's BlackBerry. ... Hey, are you guys going to a costume party or something? What's with all the capes and leather underwear? And are those real spears?

JINDAL: Tell him this! Let all America and all the world know that brave men stood this day against tyranny!

MESSENGER Tyranny? Um, sir, are you feeling OK? This is money to help prop up your unemployment insurance program, build roads, put people back to work! Refusing it would be ... well, it would be madness!

JINDAL: Madness!? THIS ... IS ... LOUISIANA! (KICKS MESSENGER DOWN THE STAIRS)

VOICEOVER: And so it was, my governor and 300 loyal political advisers marched from Baton Rouge and assembled at the border, to face the combined might of Obama's forces. They were joined by some citizens from the state's other cities...

CITIZEN 1: Hey, Governor? Some of the fellows wanted me to talk to you about turnin' down this stimulus money.

CITIZEN 1: Well, we were wonderin' if this is such a good idea, what with the economy bein' in the dumper an' all. I mean, we all voted for you. We're all Republicans.

JINDAL (pointing at a man in the crowd behind): You there! What is your profession?

CITIZEN 2: I drive an asphalt truck.

JINDAL (pointing at another): And you! What do you do?

JINDAL, turning back to his advisers: Advisers! What is your profession!?

JINDAL: See, citizen, I have more good Republicans than you.

ADVISER: Governor, it's been weeks. Maybe they aren't coming.

JINDAL: Nonsense! It's obviously some trick by the tyrant. They're waiting for us to lower our guard, and then when we least expect it, we'll wake up to find ourselves solvent. Tell the men to stand firm.

JINDAL: Wait, where are my troops?

ADVISER: Most of them packed up and moved to California. Said something about jobs there.

ADVISER: Hey, look at the bright side. You reduced your unemployment rate!

ADVISER: Of course, that’s ‘cause they all moved where jobs were…

JINDAL: Don't trouble me with details! I'm a genius!

ADVISER: Yes, sir. Oh, I have a letter for you. It's from Governor Schwarzenegger.

JINDAL: Read it to me!

ADVISER: "Dear Bobby. Thanks for the extra cash. We sure could use it. P.S. I still look better in a leather loincloth than you, you little girly-man."

Seriously, though. I'm sure the people of Louisiana will appreciate that not getting stimulus money will be better for them, or that it won't really work, or whatever this week's justification is.

This is an ideological battle, after all, and some of Louisiana's citizens are just going to have to keep suffering like good conscript soldiers for the Right, and to burnish Gov. Jindal's political reputation.

But I'm sure that last part's just a coincidence.