Free LAWYERS (At Least For a Little While)

Thanks to everyone who made the recent promotion for THE DEVIL'S RIGHT HAND such a resounding success. So much so, that I'm now offering another e-book, LAWYERS, GUNS AND MONEY, FREE for the next day or so.
Andy Cole has a pretty good life. Oh, sure, he's got two ex-wives to support and maybe he's a little too fond of good bourbon, but he's got a thriving law practice and he's one of the movers and shakers in the town of Blainesville. Then local crime boss Voit Fairgreen drops a bag full of cash on Andy's desk. Voit's brother Danny's been charged with murdering a troubled young barmaid, and Voit figures Andy's the kind of inside guy that can get Danny out of the jam. That's where things start to unravel. Someone in this town wants the truth buried, and Danny along with it. But Andy's discovering that Danny just may be innocent. And for someone like Andy, an innocent client is the worst thing in the world...Will Andy Cole, the insider, a guy who's always gone along to get along, risk everything, including his own life and the life of the woman he loves, to get at the truth?
I don't like to pick favorites among my books, but if I did, LAWYERS, GUNS AND MONEY would be one of mine. I drew on a lot of my own experiences as a small town trial lawyer writing it (although my life's not nearly as interesting as Andy's) and some of the best lines are things I've actually heard. This book also got one of my absolute favorite Amazon reviews of all time, from Steve Malley, a fan from New Zealand:
I'm writing this review from the aftermath of the Christchurch earthquake. Long days of shoveling silt and shifting rubble are tiring as hell, but Lawyers Guns and Money still kept me up late, reading first by electric headlamp until the power was restored. I was so engrossed, I barely noticed the aftershocks!
Now THAT is a good review.
Lawyers Guns and Money is free till tomorrow night. Check it out.
http://www.amazon.com/dp/B004OYTU0O
Posted by JD Rhoades at Friday, February 17, 2012 5 comments

A Romance Where Stuff Blows Up

Thanks to all the people who've helped me get the word out, THE DEVIL'S RIGHT HAND is in the top 100 FREE downloads for Amazon Kindle!

As reviewer K. Rose put it, THE DEVIL'S RIGHT HAND is  A perfect blend of action, vivid characterization, and just the right amount of romance.

And still FREE through Valentine's day!

Originally published in 2005 by St. Martin's Minotaur, THE DEVIL'S RIGHT HAND was hailed as a "supercharged crime fiction debut" by Booklist, and a "fine example of redneck noir" by the Washington Post (Patrick Anderson of the Post later gave the book a favorable mention in his work TRIUMPH OF THE THRILLER). Now, for a limited time, you can check it out FREE for Kindle.


"The Devil's Right Hand blasts right out of the chute and keeps up the pace until the final paragraph. Steeped in Southern sense of place, the reader can feel the heat and humidity and smell the cordite hanging in the air. J.D. Rhoades writes action as well as anybody in the business, and bail bondsman Jack Keller is a winner."--C.J. Box


"Spare, tense and violent, this is a debut that will turn other writers green with envy. Jack Keller is a sure-fire star of the new generation of hard-boiled heroes."--Stephen Booth, author of Blind to the Bones


"Riveting as the rack of a sawn-off shotgun, The Devil's Right Hand is a novel of pace and power, locked and loaded from the start. Bail enforcer Jack Keller, a damaged gulf war veteran, moves the heart in unexpected ways. Keller's quarry Raymond, a drug dealer bent on revenge, pledges 'no more water, but the fire next time'--and it's the fire we get on almost every page of a book that is positively aflame with action. Let's hope that J.D. Rhoades and Jack Keller are due to deliver more of the fire and soon."--Ken Bruen, author of The Guards
Posted by JD Rhoades at Monday, February 13, 2012 1 comments

These Guys Really Will Fall For Anything (Which Explains Newt Gingrich)


I've often said in these pages that the hardest part of writing satire is staying ahead of reality.
I write about something so mind-bogglingly off the wall that no one with more than three viable brain cells could possibly believe it's serious, only to find that something 10 times weirder actually happened the day I turned in the column.
Apparently, some people have the opposite problem: They're unable to distinguish satire from reality. People like Republican Congressman John Fleming of Louisiana, for example.
You may remember Rep. Fleming as the poor little rich boy who appeared on MSNBC this past September and complained that by the time he paid taxes, paid all his bills, and "fed his family," he had "maybe, $400,000 left over." Clearly, someone who can say something like that with a straight face doesn't have much of a sense of irony, or reality, for that matter.
So it is perhaps not surprising that Rep. Fleming fell for a joke posting on the well-known satirical website "The Onion." The fake story, which ran several months ago, was headlined "Planned Parenthood Opens $8 Billion Abortionplex" and described "a sprawling abortion facility that will allow the organization to terminate unborn lives with an efficiency never before thought possible."
It gets more and more outrageous from there, with descriptions of an on-premises  "three-story nightclub and a 10-screen multiplex theater", and a Planned Parenthood spokesman "quoted" as saying: "Although we've traditionally dedicated 97 percent of our resources to other important services such as contraception distribution, cancer screening, and STD testing, this new complex allows us to devote our full attention to what has always been our true passion: abortion."
Now, anyone who would give this a moment's thought would come to the conclusion that it was a joke, a sendup of the paranoid fantasies that mark the right-wing attitude toward Planned Parenthood, one of the many, many organizations they love to hate.
But when you're so addicted to outrage that you're willing to believe anything that gets your dander up, there's no such thing as a moment's thought, and no story too over-the-top for you to fall for like a credulous rube on his first day in the city.

Recently there's been a big brouhaha over the decision by the Susan G. Komen for the Cure Foundation to withdraw funds for breast cancer testing from Planned Parenthood, then reinstating them after a public outcry. This sort of thing is just catnip to a right-wing demagogue like Fleming, so he apparently thought it would be a good idea to jump on the bandwagon.
He decided to weigh in against Planned Parenthood by posting the "Abortionplex" story on his Facebook page, with the snippy comment: "More on Planned Parenthood, abortion by the wholesale [sic]." 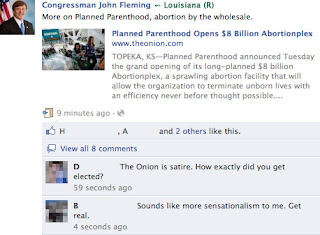 Fleming's inability to comprehend a joke was immediately picked up by the website "Literally Unbelievable: Stories from The Onion as interpreted by Facebook." Much merriment ensued in the comments, with "how did someone as dumb as you get elected?" being a recurring theme. Pretty soon the story had gone national.
The whole fiasco reminds me of the great Harry Potter scare of the early 21st century, when another group of paranoids seized on an Onion article titled "Harry Potter Books Spark Rise in Satanism Among Children" to "prove" that the Potter books were evil.

An article in the far-right blog WorldNet daily even quoted "High Priest Egan of the Church of Satan in Salem, MA," saying, "Harry is a godsend to our organization. We've had more applicants than we can handle, and of course most of them are virgins, which is just gravy."
"High Priest Egan," of course, was a complete fabrication, as was the story. You'd think the use of the word "godsend" would be a tip-off, as would the absurdity of a Satanist church having an application process. But hey, wingnuts believe more absurd things before breakfast than most people can even think of in the average day, and they're not happy unless they've got something to be unhappy about, so they're easily punk'd, as the kids say these days.
At least I think they say that. I read it online somewhere.
Posted by JD Rhoades at Sunday, February 12, 2012 0 comments