Dumbass Statement of the Day

From as usual, ABC News: President Obama's harsh words for BP, the largest company in Great Britain and the fourth-largest in the world, have provoked one of the most tense times between America and the U.K. since the American Revolution.
Because we were so chummy with the Brits during the War of 1812.
I mean, really. Is it too much to expect that these idiots will have at least a rudimentary knowledge of American history?
Posted by JD Rhoades at Saturday, June 12, 2010 5 comments

The Washington Monthly reports that John Boehner now says that he doesn't want the taxpayers to help pick up the tab for the BP oil spill. His position now is that "not a dime" of taxpayer money should be used to clean up BP's mess. Not what he said yesterday, but whatever.

Boehner has not, however said if he'd support lifting the liability cap that would limit the damages BP would have to pay. With the cap still on, some of the bill for cleanup would inevitably be sent to you and me.

Meanwhile, the DCCC has put up a website, http://boehnerbpbailout.com/, asking people to sign a petition to "Tell John Boehner, No Bailout for Big Oil."

Boehner's for Bailouts For Big Oil. Has a nice ring to it.
Posted by JD Rhoades at Friday, June 11, 2010 2 comments

Email ThisBlogThis!Share to TwitterShare to FacebookShare to Pinterest
Labels: Boehner-rific

Boehner: Here's A Bat. Will You Beat Me With It Till I Cry?

Boehner: Taxpayers Should Help Pay For Oil Spill :
"'I think the people responsible in the oil spill--BP and the federal government--should take full responsibility for what's happening there,' [Minority Leader John] Boehner said at his weekly press conference this morning.

Boehner's statement followed comments last Friday by US Chamber of Commerce CEO Tom Donohue who said he opposes efforts to stick BP, a member of the Chamber, with the bill. "It is generally not the practice of this country to change the laws after the game," he said. "Everybody is going to contribute to this clean up. We are all going to have to do it. We are going to have to get the money from the government and from the companies and we will figure out a way to do that."

So today I asked Boehner, "Do you agree with Tom Donohue of the Chamber that the government and taxpayers should pitch in to clean up the oil spill?" The shorter answer is yes.

The GOP has come out strongly in favor of insurance companies who deny coverage for pre-existing conditions and who drop you when you get sick, and now they're saying you and I need to help pay for BP's clean-up of the awful mess THEY made (while of course. screaming that helping the unemployed and covering children with health insurance is socialism and will bust the budget.)
They're handing the Democrats a Louisville Slugger the size of a redwood and begging "please beat me over the head with this". Will Congressional Democrats have the courage to do it?
We live in hope.
Posted by JD Rhoades at Thursday, June 10, 2010 4 comments

The Republicans claim they're going to run this fall on a platform of repealing health care reform. And the Democrats say "bring it":
I'm always gratified when the Democrats show some spine. It doesn't happen often enough, but when they do, it's fun to watch.
Posted by JD Rhoades at Thursday, June 10, 2010 2 comments 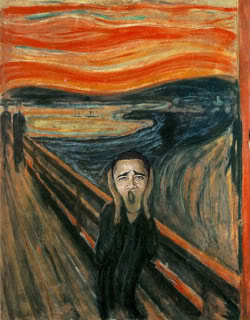