Setbacks All Over: Bad Election Day for the Far Right

I tell you, I wonder sometimes if it’s a sickness.
Election night 2011, an off-year election, no less, and I’m up till all hours, flipping back and forth from website to website, channel to channel, checking the results from races all over the country.
But politics is my football. Where some guys obsessively follow the stats of the Giants or the Panthers, searching for news on the health of their favorite quarterback’s throwing arm and trying to pick next Sunday’s winners, I amuse myself by pondering the broader implications for 2012 of city council elections in Cincinnati. OK, I’m exaggerating, but not by much.
So what can we glean from the results of this week’s voting? Well, mostly, it was a bad day for the far right.
One big story was a referendum in Ohio to repeal a law that stripped public employees of many of their collective bargaining rights. The embattled law was championed by conservatives, including Republican Gov. John Kasich. It was repealed by a margin of 62 to 38 percent.
In Mississippi, voters considered a so-called “personhood” law, which would have declared that human life begins at the moment of conception and which would have outlawed abortions in all cases, even of rape or incest. Anti-abortion forces had high hopes that the measure would pass in conservative Mississippi, setting the stage for a march to the Supreme Court and an attempt to overturn Roe v. Wade. Republican gubernatorial nominee Phil Bryant told a rape victim who questioned him at a rally that if the law failed, “Satan wins.”
The people of Mississippi didn’t buy it. The measure lost in a landslide vote, 57 to 43 percent. The Prince of Darkness could not be reached for comment.
In Arizona, the man who wrote and championed one of the nation’s most controversial and Draconian immigration laws became the first sitting Senate president in the nation and the first Arizona legislator ever to lose a recall election, according to The Arizona Republic.
The right did have a couple of small victories. In Ohio, they passed a law stating no citizen of the state will be required to buy health insurance, which would essentially nullify the individual insurance mandate in the federal Affordable Care Act.
Unfortunately for the supporters of the bill, the Supremacy Clause of the U.S. Constitution (you know, the document the wingnuts claim to love but seem to know next to nothing about) is pretty clear that you can’t just nullify federal law like that, and the measure will almost certainly be overturned.
In Virginia, the election left the state Senate divided 50-50, with ties to be broken by the Republican lieutenant governor. Face it: When the victories you have to crow over are a symbolic measure sure to be thrown out and a tie, you had a bad night.
So what does it all mean? The key word is “overreaching.” The Republicans in these states got in power based on anger about the economy and the jobless rate, but instead of doing something about that, they went right to the radical union-busting and culture wars.
That may have played to the Teahadists who have the Republican Party in thrall, but the majority of the people were having none of it. On the other side, the vote against the individual mandate could be seen as a reaction against what the people see as overreaching by the federal government.
So the candidates who do well in 2012 general election will be the ones seen as moderates. Only Romney and Huntsman seem to have a chance at this on the Republican side. But they infuriate the tea party “base,” just as Obama’s mostly moderate stances infuriate the actual left (as opposed to the Obama-loving left that exists only in the imagination of the demented right).
The key to victory will be for a candidate to convince the center that he or she is the reasonable one, with reasonable policies aimed at benefiting them, while getting enough of the party’s far-right or far-left wings to put aside their distaste for moderation long enough to get out and vote.
So far, the person best positioned to do that is Barack Obama, because Romney’s still trying to pander to the True Believers who hate his guts, and Huntsman’s practically invisible.
But please, Republicans, as an Obama supporter, I urge you: Keep up with the overreach and the radicalism. Double down on the crazy.
In fact, I think I’ll go send a donation to the Cain campaign.
Posted by JD Rhoades at Thursday, November 17, 2011 4 comments


The story of Thomas Cromwell, who rose from poverty to become one of Henry VIII's most trusted advisers. Most accounts treat Cromwell as a ruthless, conniving bastard, but this book doesn't allow for such an easy judgment. Cromwell is many things: scheming but loyal, clear-eyed and seemingly cold in matters of business but tender towards his family, friends and household, like a medieval Godfather.

The characterization is fascinating, not just of Cromwell, but of Henry and the various members of his court, especially the beguiling Anne Boleyn and her sister Mary. The prose is also nearly hypnotic in its beauty. On the downside, the plot moves slowly, and I confess there were times I had to push through to the finish, but the book is worth the effort.

View all my reviews
Posted by JD Rhoades at Thursday, November 17, 2011 0 comments

DEAD OF WINTER is Live!

"Southern noir thriller writer J.D. Rhoades weighs in with the unforgettable I’ll Be Home for Christmas, a holiday tale that will have you turning on all the lights before you enter your house and checking the bottom of your Christmas stocking for a concealed .38."
That's just one of the great stories in this new anthology that also features Chaz McGee (aka Katy Munger), Taffy Cannon, Rory Tate (aka Lise McLendon), Gary Phillips, Brynn Bonner, Sarah Shaber and Kate Flora.
Posted by JD Rhoades at Tuesday, November 15, 2011 0 comments 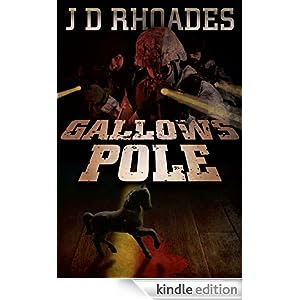 GALLOWS POLE,  my third full-length e-published novel, is now live for Kindle, and for other formats on Smashwords. NOOK coming soon!

Someone is killing entire families, forcing fathers to hang their wives and children before taking their own lives. How does the killer do it? And what is the meaning of the small iron horse the killer leaves at every murder scene? FBI agent Melissa Saxon and her handpicked team are racing against time to solve the mystery before more families die.Former anti-terrorist operative Colonel Mark Bishop and the survivors of his command think they know. One of their own, a stone killer who calls himself the Hangman, has come out to play, and he's trying to draw out not only Bishop, but his former comrades—the elite anti-terrorist team known as Iron Horse.Only the Horsemen can stop one of their own. But the team is disbanded, the survivors scattered. Bishop himself is tormented by guilt for the things he had to do to keep one of his men from suffering an agonizing death. Their adversary is not only a skilled assassin, but a master at creating fear. Behind the scenes, shadowy and powerful figures pursue their own plans for Bishop and the Hangman.Mark Bishop, Melissa Saxon, and the last of the Iron Horsemen will have to use all their courage and every resource, including an array of high-tech weapons, to stop the Hangman. What they have to do will put everything they ever believed in to the ultimate test and push Bishop to the edge of sanity.


Hope you like it! if you do, please tell all your friends by reviewing, "liking" on FB or Amazon,  or recommending. Word of mouth is my best advertising.
Posted by JD Rhoades at Monday, November 14, 2011 2 comments

HEY! HEY! LOOK AT ME! Or, When the Spear Carriers Start to Sing

It's my turn today at the Thalia Press Authors Co-Op Blog, where I talk about the characters that just won't stay in the background.
Posted by JD Rhoades at Sunday, November 13, 2011 0 comments