What the Hell, I'll Join In

John Scalzi's donating all his e-book profits from Subterranean Press between today and February 8, 2012 to Planned Parenthood. He says he'll direct that the donation go specifically toward their breast cancer screening and educational activities, to help replace the funding lost from the Susan G. Komen Foundation.
Sounds like a good idea. I'll join in.
Profits from any of my e-books bought on Amazon, Nook or Smashwords between now and Wednesday the 8th go to Planned Parenthood, with the same proviso.
You know what to do.

Email ThisBlogThis!Share to TwitterShare to FacebookShare to Pinterest
Labels: e-books

"You know that one and a half of the State Senate of Utah are screwheads? You know I was never really frightened by the bopheads and the potheads with their silliness never really frightened me either, but these goddam screwheads, they terrify me. And the poor doomed, the young, and the silly, the honest, the weak, the Italians... they're doomed, they're lost, they're helpless, they're somebody else's meal, they're like pigs in the wilderness. Romney: Come here Harris, come here. Harris,

When the Clowns Turned Mean

I see Newt the Magic Wingnut got his behind kicked in Florida, but he vows to continue the fight. Excellent.
See, I know it's the conventional wisdom that after the nomination, everyone kisses and makes up. This is usually possible because the nastiest things that one campaign says about the other are done by surrogates or staffers. But I don't recall the candidates themselves getting quite this nasty and personal with one another. This isn't Bush I calling Reagan's plans "voodoo economics". This is Newt flat out calling Romney a liar, and Romney calling Newt unethical. They're both right, of course, but I don't see this leading to a rousing chorus of "Kum Ba Yah" at the convention.

Now, it is true, that after Obama sewed up the nomination, a contingent of unhinged Clinton supporters (known as PUMAs, for "Party Unity My Ass") were very noisy and bitter. But the main difference between the Republicans and the Democrats these days is that the Democrats haven't put their farthest fringes in control of the party (anyone who tells you Obama is a "leftist" clearly doesn't know any real leftists). The clowns have been running the GOP circus for a while now, and it's never pretty when clowns turn mean. 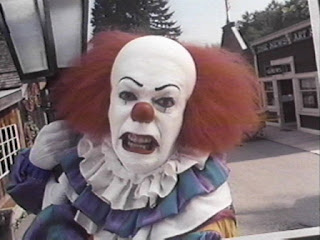 Email ThisBlogThis!Share to TwitterShare to FacebookShare to Pinterest
Labels: GO LEMMINGS GO, The Party of Love

The Party of (Conditional) Love

As you know, I call the Republican Party the "Party of Love," since it's an article of faith with them that it's the liberals who are filled with hate.
Unlike, say, Republican state delegate and Senate Candidate Bob Marshall of Virginia, who said recently that children with disabilities are God's punishment on women who have had abortions. (Sarah Palin has been notably silent on that particular insult to her Down syndrome baby.) 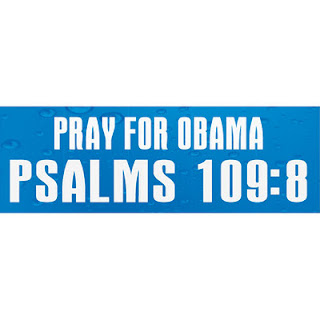 Or the Republican speaker of the Kansas House who urged people to pray to God, in the words of Psalm 109:8, that President Obama's "days be few, that his children be fatherless and his wife a widow." Some enterprising Republican entrepreneurs have even made this a bumper sticker.
Yes, the right is filled right to the brim with love. But it seems that right-wing love is a conditional thing.
- Right-wingers love the troops, unless they turn out to be gay, or report war crimes, or start speaking out against a war the right wing loved and cheered for.

At least they loved the war until a Democrat became president, at which point the war they cheered for becomes that president's fault and something that should have been ended yesterday.
- Right-wingers love the Constitution, except the parts that grant citizenship to people who were born here.
They also aren't all that crazy about the parts that give the right to counsel or to a jury trial to people accused of crimes, or the parts that don't allow the government to just read your mail or tap your phones without any oversight whenever they feel enough concern about your activities. Unless the president is a Democrat, and then they're suddenly very, very concerned about these things.
But they still don't want jury trials for cases where someone was injured by a doctor's or a corporation's negligent acts. Those juries are "out of control."
- Right-wingers love free speech and the right of free assembly, so long as it's exercised by older white people wearing teabags on their hats. Anyone else is either an anarchist or a dirty, flag-burning hippie who needs to get one of those jobs they say don't exist because it's the president's fault.
- Right-wingers love the idea of cutting government spending, unless it's cuts to money spent on them, which they don't consider spending at all.
- Right-wingers love the idea of cutting taxes, but only if you're talking about cutting taxes on the wealthy. A tax plan that raises taxes on the poor and middle class is just fine with them. In fact, one of the right's biggest gripes now is that not enough poor people are paying federal income tax.
- Right-wingers love "family values" and demand that politicians practice marital fidelity. But only if the politicians are Democrats. Republicans who conduct years-long affairs with staffers, and who ditch their wives because "they're not young or pretty enough, and besides she has cancer," are fine.
In fact, even bringing up those affairs is "appalling," because, after all, Bill Clinton had affairs. The fact that Bill Clinton had affairs, however, is itself so appalling that it must be brought up at every opportunity.
- Right-wingers love the rich and successful and think they deserve credit for their hard work and innovation. Unless those rich and successful people are George Soros, Warren Buffett, or anyone who made their money in the entertainment industry who doesn't vote Republican. Those people should just shut up.
George Orwell, in his novel "1984," described a party that maintained its grip on power by a rigorous adherence to the principle called "doublethink." 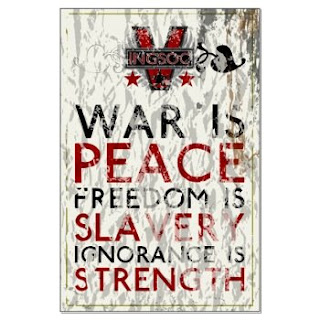 Doublethink was described as "the power of holding two contradictory beliefs in one's mind simultaneously, and accepting both of them ... To tell deliberate lies while genuinely believing in them, to forget any fact that has become inconvenient, and then, when it becomes necessary again, to draw it back from oblivion for just as long as it is needed, to deny the existence of objective reality and all the while to take account of the reality which one denies - all this is indispensably necessary."
Well, it certainly has become indispensable to the American right wing. No wonder so many of them go crazy.
Posted by JD Rhoades at Sunday, January 29, 2012 5 comments