I'm Not Saying I CONDONE It...

Long story short: 75 year old Mona Shaw of Manassas, Virginia got the sort of treatment we've come to expect as a given from big telecom companies like Comcast, which is to say, they took her money, made a lot of promises, then treated her like dogshit on the bottom of their shoes. After Mona signed up for Comcast to provide the three basic necessities of life-- phone, cable and Internet service--Comcast's people showed up for their installation appointment two days late, only did half the job, and then inexplicably cut off ALL service two days later. When Mona and her husband went to complain, they were told to wait outside in August heat. After two hours, they were told the manager they needed to speak to had left for the day.

Let's let the Washington Post pick up the rest of the story:

So, after stewing over it all weekend, on the following Monday, she went downstairs, got Don's claw hammer and said: "C'mon, honey, we're going to Comcast."

Did you try to stop her, Mr. Shaw?

Hammer time: Shaw storms in the company's office. BAM! She whacks the keyboard of the customer service rep. BAM! Down goes the monitor. BAM! She totals the telephone. People scatter, scream, cops show up and what does she do? POW! A parting shot to the phone!

"They cuffed me right then," she says.

Her take on Comcast: "What a bunch of sub-moronic imbeciles."

Damn straight. And according to the Manassas police chief: "here have been other police calls to that Comcast office, but he doesn't know what prompted them."

As noted elsewhere in this blog, Comcast has a long history of treating customer needs with an attitude that goes beyond incompetence into the realm of utter contempt. And, as reported on the blog Comcastmustdie.com, it's taking a toll on them:

[Goldman Sachs analyst Anthony] Noto has reduced his target price for Comcast to $29 a share from $34 a share. That’s based on revised estimates for a 10% loss in basic subscribers by year-end 2010, with minimal rate increases and an incremental 6% reduction in annual broadband net additions.

Now, I'm not advocating physical violence against cable, phone or Internet providers, even ones like Comcast whose "give us the money, shut up, and while we're at it, fuck you" behavior really ought to be under some kind of criminal investigation.

But if I ever run into Mona Shaw, I'm buying her a drink.
Posted by JD Rhoades at Thursday, October 18, 2007 6 comments

No Crime Writer's Kitchen Should be Without One 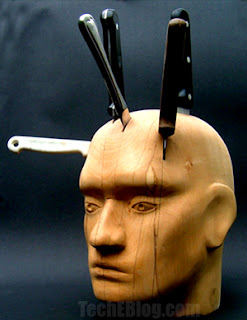 From TechEBlog : A knife block shaped like a human head.

If y'all were wondering what to get me for Christmas...
Posted by JD Rhoades at Tuesday, October 16, 2007 6 comments

Onion: It Only Tuesday

Tuesday's arrival stunned a nation still recovering from Monday's nightmarish slog, leaving some to wonder if the week was ever going to end.
Posted by JD Rhoades at Tuesday, October 16, 2007 2 comments

If you're an Iraq war vet with PTSD, just make sure you hide out, don't let anyone know, and for God's sake don't get in the papers, because there is no one...NO ONE...these Republican thugs won't attack.

After this story about the troubles of a returned vet and his wife ran in the Washington Post, another big brave blogger who skulks behind the pseudonym "Raven" opined:

How does one decipher whether a person is truly mentally ill, or is exploiting their battle experiences to their fullest advantage?

How do we know if Troy is the person he is because of the battlefield experiences, or if he is choosing to be this person because others are enabling him? Since we’re not hearing from Troy’s pre-war family and friends it is difficult to really know what he was life prior to his tour in Iraq.

I’m very skeptical of Troy’s “problems” and so should others [sic] who read this article.

On what evidence, we might ask? We would be disappointed if we did....

He is capable of rational thought and he is making choices. He choses to swallow pills and watch TV in the dark- to shut himself in…to refuse medical/psych care and, I really wonder- the required services that would make him a better person.

Yes, because the mentally ill so often make good choices when it comes to their treatment, especially considering the stigma the military apparently still gives to this kind of injury.

Maybe "she" should take the picture of the Marine and the flag down until "she" stops shitting on soldiers who sacrificed their sanity in the name of Bush's Big Mistake.

If you can stand to read it, "Raven's" attempt to defend "her" self in the comments section is particularly hilarious. "She" rages at one critic: You’re [sic] comment adds much to this debate. I write an opinion and that’s all you have to say? Typical leftard…assumptions and name calling and sarcastic remarks= is [sic] how the left works.

Of course, like most of these thin-skinned right-wingers, big brave "Raven" shut down comments because people were being (sniff) MEAN to "her":

Thats what they ["leftists"] do. Attack. Accuse. Make assumptions. And nothing else.

This little snit, of course, ignores a well reasoned post above it that pretty conclusively refutes "Raven's" claim that the symptoms of the soldier in the article "don't add up" by quoting from the Diagnostic and Statistical Manual of Mental Disorders on PTSD.

And, of course it ignores the fact that "Raven's" entire post was "attacking, accusing, making assumptions and nothing else."

(Note: I put 'her" and "she" in quotes, because "Raven" chooses to hide "her" true identity. For all we know, "she" could be a middle aged closeted guy eating Cheetos in Mom's basement and whacking off between blog posts to a DVD of Full Metal Jacket.

Of course, if I couldn't write any better than this turkey, I'd probably use a pseudonym too.)
Posted by JD Rhoades at Sunday, October 14, 2007 0 comments