Keith Snyder, describing a spoof of fanfiction and/or those who write it on Lee Goldberg's blog:

That's not satire. It's reenactment.

I'm not dragging the whole fanfiction debate over here (at least not right now), but that line has the potential to be so useful in so many situations that I told Keith to consider it stolen. 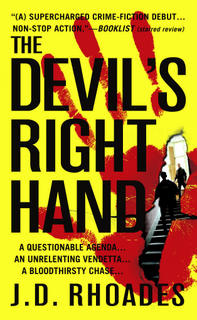 The paperback for "The Devil's Right Hand" is slated for January 2006 release. Here's the new cover.

I'm Not A Terrorist. Good to Know.

Well, that’s a relief. A person who recently wrote a letter to this paper wrote back to clarify that they didn’t really mean to call me a terrorist.

For the record, I never really thought that that’s what the writer meant. After all, calling me an actual terrorist would be silly. I’m a Southerner. Southerners can’t be terrorists. We love pickup trucks too much. We’d never waste a perfectly good one by driving it into a crowd and blowing it up.

After reading the clarification, my son turned to me and said, “I never thought you were a terrorist, Dad.” I have to confess, I got a little choked up at that, even though he may have just been trying to get an advance on his allowance.

But seriously, folks, what troubles me is the sentiment expressed in the letter that I’m trying to “hurt America” because I criticize George Dubbya Bush (Dubbya, by the way, was his nickname back in Texas, and one he apparently embraced, so I figure it’s OK to call him that). It’s not the first letter I’ve gotten that expresses that sentiment.

But here’s the thing. George W. Bush is not America. He’s the president. He’s a politician.

Just as, a few years ago, it wasn’t the United States of Bill Clinton. People who were teed off at “Bubba” or “Slick Willie” (as he was known to his detractors) weren’t trying to get him removed from office because they were trying to “hurt America.” The people opposed to Clinton ordering air strikes in the Balkans didn’t “love Slobodan Milosovic” and they weren’t “pro-genocide.” (Ironically, some of the very same people who are now the loudest exponents of the “if you criticize Bush, you endanger the troops” idea didn’t seem to feel that way when it was American airmen getting shot at over Kosovo.)

George W. Bush is not America. He’s not a king. He’s a man elected to do a job. But I think he’s lousy at it.

I think he’s done a terrible job in fighting the war on terror. He started off good with Afghanistan, then told us he “really wasn’t all that concerned” about Osama bin Laden, the man who ordered the murder of almost 3,000 Americans.

Let me ask you this: If, after the Oklahoma City bombings, Bill Clinton had said “Yeah, we know it’s this McVeigh guy, but he’s on the run, he’s neutralized, he’s not really a viable threat, so we’re not all that concerned about him,” Clinton wouldn’t have been impeached, he’d have been hauled out of the White House in tar and feathers, and I’d have been standing there warming up the tar.

As for that War on Terror, it’s becoming more and more obvious that the invasion of Iraq has done nothing to stop the problem. In fact, it’s apparently made it worse. According to a recent study by an Israeli think tank, “the vast majority of [non-Iraqi] Arabs killed in Iraq have never taken part in any terrorist activity prior to their arrival in Iraq.”

The vast majority of them “had nothing to do with al-Qaeda before Sept. 11 and have nothing to do with al-Qaeda today,” said Reuven Paz, author of the Israeli study. “I am not sure the American public is really aware of the enormous influence of the war in Iraq, not just on Islamists but the entire Arab world.” As cartoonist Garry Trudeau archly observed, it’s not the terrorists who have a recruiting problem.

Hurt America? If I wanted to see my country hurt, I’d be rubbing my hands and cackling with glee right now at the way Bush is mismanaging things. Trust me, I’m not. But just because I think Dubbya and Rummy and Condi and Dick are making a massive botch of the war on terror, don’t think for a moment I don’t think the war should be waged or that it can’t be won.

If I didn’t love America, I wouldn’t be so almighty teed off at what I see this administration doing to it in its time of greatest need. And if, by some wild freak of chance, these sentiments ever get broadcast on Al-Jazeera, I hope the reaction of the viewer would be, “Whoa! I sure wish I was free to say that kind of thing about my ruler!”

God bless you all, and God bless America. And God bless and keep George Dubbya Bush — from screwing my country up any worse in the next three and a half years.

Dusty Rhoades lives, writes and practices law in Carthage. He says he’s not really sure what the Arabic word for “Whoa!” is.
Posted by JD Rhoades at Sunday, July 24, 2005 8 comments