The Harvard Law School graduate, onetime corporate lawyer and Texas judge also hasn't been able to land a job. He has delivered a few paid speeches, done some mediation work and plans to do some arbitration, but said law firms have been "skittish" about hiring him.

Well, you know, there's just not a lot of demand in the corporate law world for lawyers whose specialty is politicizing criminal prosecutions and providing bogus legal cover for torturing people. Have you tried looking for work overseas? Say, Syria? How about Equatorial Guinea?

"for some reason, I am portrayed as the one who is evil in formulating policies that people disagree with. I consider myself a casualty, one of the many casualties of the war on terror."


All I have to say to that is: 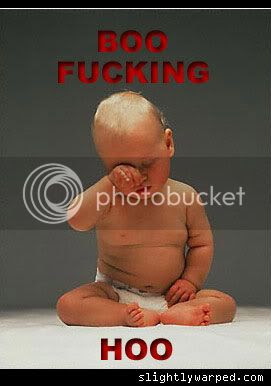 In 2002, Canadian citizen Maher Arar was flying through JFK airport on his way to Canada for a business trip, when he was detained by U.S. immigration officials based on faulty information in their database submitted by the Royal Canadian Mounted Police. Arar was interrogated for 12 days by FBI officials and then deported, against his will, via Jordan, to Syria, where he was held for 10 1/2 months in a cell measuring 3 feet by 6 feet by 7 feet and tortured with steel cables, according to a Canadian inquiry. Arar was never a suspect or a target in any terrorist investigation.

Abdallah Higazy was a victim in the War on Terror:


Later, as hotel staff were inventorying guests' belongings, they found, supposedly in Higazi's room safe, a radio which could be used to communicate with airliners in flight. When Higazi came to get his stuff, he was taken into custody by the FBI.

Higazi at first denied owning the radio or knowing anything about it. So the FBI ratcheted up the pressure by threatening his family. If he didn't come clean, the agents said, the U.S. would "make sure Egyptian Security gives [his] family hell." Everyone knew exactly what that meant, including the agent doing the questioning, who later stated that he was talking "yeah, probably about torture."

Higazi's parents are in their 60s. He has a young sister in Egypt, and Egyptian security is reputed to be particularly creative with female prisoners. Faced with that threat, Higazi broke. He confessed and signed a statement written by the FBI saying he'd stolen the radio from the Egyptian military.

Three days later, an airline pilot showed up at the hotel. He wanted his radio back.

The FBI verified that the radio belonged to the pilot, not Higazi. The hotel began backpedaling about the radio being found in Higazi's safe. The government released him after 34 days in custody and dismissed all charges.

The DOJ's reaction? They demanded the details of Higazy's treatment be taken out of the official court record and replaced with a bland: "the government has stipulated that the confession was coerced."

Let's be real clear on this, Alberto: You are not a fucking victim of anything but your own arrogance and cowardice. You're lucky not being able to find a job is the biggest thing you have to worry about. President-elect Obama has not shown a great deal of enthusiasm for investigating and prosecuting the people who attempted to turn the country I love into a third world police state for whom torture was an official policy. I for one do not agree with the President-elect on this, but you, you sniveling cur, should be on your knees thanking your Dark Lord every damn day of your miserable existence on this Earth before he gathers you into the Hell you so
richly deserve, where hopefully you will be waterboarded throughout eternity.

The UOGB shows off on "Orange Blossom Special" .

Terrenoire may be right--it's the year of the Uke.

Can Ya Dig It?

The theme from "Shaft." Played on ukeleles. Need I say more?

Thanks once again to Balloon Juice.
Posted by JD Rhoades at Friday, January 02, 2009 4 comments

Well, hell. He was one of the greats. His Parker books, written under the name of Richard Stark, are some of my absolute favorites. They're perfect gems, and textbooks on how to write tough, hard-boiled prose.

This is a stunning and heartbreaking loss to crime fiction.

The NY Times obit mentions that one reason Westlake used so many pseudonyms was "to combat skepticism over his rapid rate of writing books, which at some points reached four a year." Pretty sobering thought for those of us who are struggling to get one out a year, huh?

To all Hellions, everywhere, here's to a great year ahead.
Posted by JD Rhoades at Wednesday, December 31, 2008 4 comments

I think we can all agree that this has been a year that won't look any better in retrospect than it did the first go-round. So, once again, we bring you 2009: the Year in PREview:

JANUARY: President Barack Obama is sworn in with his hand on the same Bible Lincoln used at his first inauguration. He has a Christian, anti-gay-rights minister give the invocation and a Christian minister giving the benediction. He invokes God multiple times during his speech. Right-wing bloggers and pundits insist this just proves that Obama is, in their words, "A Muslim. Or an agnostic. Or something. We're not really sure what, but we know it's something really bad.
Maybe he's a Goth. Yeah, that's it. A Goth."

FEBRUARY: Two weeks after the inauguration, Fox News airs the first of a 470-part series of reports (hosted by theoretically Democratic Senator Joe Lieberman) on "the Failed Obama Administration." The first one is entitled, "So Where's That Economic Turnaround, Mr. Smart Guy? Huh? HUH?" A motion at a Democratic Party meeting to censure Lieberman is voted down because, as Majority Leader Harry Reid says, "we're a big-tent party that encourages different viewpoints, even unfair and stupid ones."

MARCH: President Obama states that he does not intend to investigate or prosecute alleged war crimes by Bush administration officials who authorized the torture of detainees. "We believe," he states, "in looking forward, not looking back." O.J. Simpson immediately files an appeal of his armed robbery conviction under the new legal theory of "Hey, let's not dwell on the past."

MAY: The Obama family, fully settled into the White House, adopts a dog, a male sheepdog they call Rags. Hard-core Hillary Clinton supporters declare the choice of a male dog "a slap in the face to hard-working females everywhere and proof of Obama's sexism and misogyny," while the Republican National Committee immediately files suit to force the disclosure of the dog's AKC papers. When the White House announces that Rags is not registered with the AKC, Fox News begins a nightly series of investigative reports on "Rags-Gate: What Is Obama Hiding?"

JUNE: The Big Three automakers return to Congress to ask for another $75 billion in loans. When asked what they'd done with the previous money allocated to them by President Bush, Chrysler's CEO Bob Nardelli looks at the ground sullenly, shuffles his feet and mutters, "I don't know. Stuff." GM CEO Rick Wagoner holds up a crayon drawing of an electric car he claims they're designing. Unfortunately, after being questioned more closely, Wagoner admits that car's electric engine has to be charged by a generator that runs on gasoline. "Clearly," Tennessee Sen. Bob Corker claims, "this is entirely the fault of the United Auto Workers." The automobile industry is saved at the 11th hour when Brad Pitt and Angelina Jolie adopt Nardelli, Wagoner, and the entire United Auto Workers.

JULY: A total eclipse of the sun causes right-wing bloggers and pundits to claim that the Obama administration is a "complete and dismal failure." "If we had only elected John McCain," theoretically Democratic Sen. Joe Lieberman states while guest-hosting the Rush Limbaugh radio show, "the Moon Dragon would never have dared to eat the Sun."

SEPTEMBER: Hollywood paparazzi appear before Congress and request a $10 billion bailout, claiming that their business has been thrown into turmoil due to the lack of crazy antics by pop singer Britney Spears. "She hasn't shaved her head, dropped her kid, or attacked a car in months," dejected photog Guido Kleinmann tells a Senate subcommittee. "We're dyin' out here. Also, autoworkers." A compromise is reached when Congress agrees to fly drug-addled UK pop star Amy Winehouse to L.A.

OCTOBER: Theoretically Democratic Sen. Joe Lieberman disrupts a presidential address to Congress by throwing a spear at the podium while President Obama is speaking. Senate Democrats vote down a measure to have Lieberman stripped of his committee chairmanships while in federal custody because, in the words of nominal Majority Leader Harry Reid, "Hey. What can I say? We're chumps."

NOVEMBER: President Obama, following the tradition of presidents before him, pardons the White House turkey. Congressional Republicans immediately demand an FBI investigations into whether the pardon was politically motivated, while Rush Limbaugh, through a mouthful of his special-recipe oyster and Oxycontin stuffing, lambastes Obama as a "phony" for eating Thanksgiving dinner anyway.

DECEMBER: Just in time for Christmas, Sarah Palin releases her political manifesto, "I Betcha You Think You're Pretty Doggone Smart, Doncha?" In what her literary agent (Joe Lieberman) calls a display of her "authorly maverickness," the book contains no actual words, just pictures, crude cartoons, and the occasional pop-up page.

Here's to the passing of a kidney stone of a year! May 2009 be better all around.