We're Up and Lurching Again


Well, I know we’re all glad that’s over. The House and the Senate have finally reached both a continuing resolution to keep the government running at current funding levels and a raising of the debt ceiling so we can continue to pay the bills we’ve already run up.
This came about after a small but noisy group of Teahadists decided to take the government and the economy hostage to try to undo the legislative loss they’d suffered when they were unable to defeat the Patient Protection and Affordable Care Act.
Once again, they assumed that everyone hated and feared President Obama and his “Care” as much as they did, and once again, they were wrong. Even the people who disliked or distrusted the ACA weren’t, in the final analysis, willing to destroy the country’s credit rating and its already shaky ability to function to magically make it go away.
When it became apparent that the president and the Democrats were, for once, united, and that the legislative process does not include threatening to dynamite the government if a bill you don’t like got passed, the desperate and doomed Teahadists and their hapless enablers in the Republican Party began strutting and raging like Al Pacino’s bumbling bank-robber-turned-hostage-taker playing to the crowd by yelling at the cops outside the bank in the movie “Dog Day Afternoon.”
Some of my favorite (and by “favorite” I mean “I had to laugh to keep from banging my head against the wall”) moments:
— Congressman Marlin Stutzman (R-Kindergarten) fuming, “We’re not going to be disrespected. We have to get something out of this. And I don’t know what that even is.” If you ever needed a quote to perfectly sum up the incoherent, unfocused rage and childish hissyfits that characterize the current American right, there you have it.
— Texas Rep. Louie Gohmert deriding John McCain’s criticism of the Teahadists by saying John McCain (who was a POW) was “a guy that’s been to Syria and supported al-Qaida and the rebels” — followed by McCain’s shrugging off the insult by saying, “If someone has no intelligence, I don’t view it as being a malicious statement.” Zing!
(By the way, there are some people who like to email me to express their outrage that I’m disrespecting Sen. McCain’s military service every time I say something less than complimentary about him. I’m sure you’ll want to express your displeasure to Loony Louie at his website: http:// gohmert.house.gov/contact/. Don’t bother thanking me, I’m here to help.)
— Republican Sen. Lindsey Graham admitting that while the Republicans “overplayed their hand,” he was “frustrated” at the refusal of Senate Majority Leader Harry Reid and the president to negotiate with a gun to their heads.
“This is a very frustrated Lindsey Graham,” he added, “which is a very dangerous thing.” It would have sounded a lot more impressive if Graham didn’t sound like Aunt Pittypat from “Gone With the Wind” when he said it.
— GOP strategist Alex Castellanos likening Ted Cruz’ Quixotic crusade to “having bunny sex” — something that feels good while you’re doing it, but which is ultimately destructive because the population boom leads to an inevitable bust.
To which host Anderson Cooper incredulously asked, “Are you high?” and Castellanos replied: “I wish I was.” (By that time, he wasn’t the only one.) The next night, Cooper showed up with an actual bunny for Castellanos, who thankfully did not try to make a date with it.
— A group protesting the closure of war memorials by marching on the White House and waving Confederate battle flags. 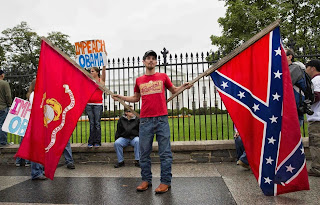 Because nothing says you love your country more than brandishing the flag of the people who made war on it because they lost an election.
In the end, for all their posturing, the Tealiban got nothing.
They chose Obamacare as their hill to die on, and die on it they did, but not before costing the U.S. economy an estimated $24 billion (according to Standard and Poor’s).
People who contracted with their government suffered from the delays in contracts and payments. People trying to buy homes with FHA or VA loans found their closings delayed because the personnel needed to verify their incomes were “furloughed.” In short, for one brief moment, the government functioned exactly as it would if the Teabaggers had their way, which is to say barely at all. And people didn’t like it one bit.


So now the government is up and running again. Well, not so much running as lurching and staggering ahead toward the next crisis like an addled drunk who briefly rallies from slumbering in the gutter to make a few hundred more yards of progress toward home before collapsing again under an inviting oak tree, all the while swearing to himself, “I’m never doing this again.” I hope they don’t, but I’m not betting on it.
Posted by JD Rhoades at Friday, October 18, 2013 6 comments

Make Up Your Minds: Is The ACA Slavery or the Holocaust?


I’ve noted before how our crowded media environment has led politicians to resort to wilder and wilder rhetoric and crazy hyperbole to try to draw attention to their side.
But I have to say, the current fight over the Affordable Care Act (aka Obamacare) has created some truly grade-A hysteria among its opponents, both on the right and the left.
For instance, Virginia gubernatorial candidate Ken Cuccinelli has been fond of using his stump speech to claim that the resistance of some states to implementing the Affordable Care Act is analogous to the states that refused to honor fugitive slave laws in the pre-Civil War period.
Venerable conservative George Will, whom I used to actually respect, parroted what has apparently been distributed via fax, text and email as the latest anti-Obamacare talking point.
“I hear Democrats say, ‘The Affordable Care Act is the law,’” he groused, “as though we’re supposed to genuflect at that sunburst of insight and move on. Well, the Fugitive Slave Act was the law, separate but equal was the law, lots of things are the law, and then we change them.”
New Hampshire State Rep. Bill O’Brien apparently got the memo, too. He called Obamacare “a law as destructive to personal and individual liberty as the Fugitive Slave Act of 1850, that allowed slave-owners to come to New Hampshire and seize African-Americans.”
To be fair, some on the left are as prone to overheated rhetoric over the ACA as those on the right. Michael Moore, for example, lambasted Obamacare because it didn’t ban the health insurance industry altogether and create a single payer system. “If you’re going to ban slavery,” he said, “ban slavery.”
Yes, because a law that keeps insurance companies from denying you coverage based on pre-existing conditions is exactly like a law requiring that human beings who achieved freedom be returned to owners who would most likely beat them half to death with a bullwhip before castrating them for running away.
And having to have health insurance is exactly like being forced to pick cotton from sunup to sundown, having your wives and daughters subject to rape, and living under constant fear of having your family broken up and sold to someone hundreds of miles away. It’s eerie how similar those two things are.
For some Republicans, however, comparing the ACA with slavery doesn’t create the horror they’re looking for. Nothing will do for them but to equate it with the Holocaust, because after all, nothing makes you look more reasonable and level-headed than the knee-jerk Hitler reference.
“You must buy health insurance or pay the new Gestapo — the IRS,” said Maine Gov. Paul Lepage. Sheryl Nuxoll, a Republican state senator from Idaho, characterized the health care exchanges set up under the ACA as “much like the Jews boarding the trains to concentration camps.”
Ted Cruz, in his famous “Green Eggs and Ham” faux filibuster, compared Republicans who doubted the efficacy of his “defund Obamacare or we shut down the government” strategy to the European powers who rolled over for Hitler in the 1930s.
Yes, because creating an online health care marketplace where people can compare and contract different plans is exactly like forcing people into an unheated cattle car with no room to sit or lie down and no sanitary facilities and taking them hundreds of miles to a hellhole where they’ll be tattooed with numbers on their arms and either worked to death or herded into extermination chambers and asphyxiated en masse with Prussic acid. Those are entirely the same thing.
Here’s the thing about the health care system: You really can’t opt out of it. At some point, you’re going to get sick, and you will receive medical care. We don’t just let sick people die for lack of money, because despite the efforts of the Teahadists, we’re still a civilized country. And if you don’t have the means to pay for it, then the rest of us foot the bill.
While the ACA isn’t perfect, it is one means of making sure that more people have the ability to pay for the medical care they get. It was arrived at by grueling negotiation and multiple compromises, and it was found constitutional by the Supreme Court.
Equating it with slavery or the Holocaust makes you look like the kind of teenage drama queen for whom cleaning her room before she goes out is The End of Life As She Knows It.


Lose the tantrums and grow up.
Posted by JD Rhoades at Sunday, October 13, 2013 2 comments