I did not actually watch the Miss America Pageant. While I like the sight of pretty girls as much as the next fellow, I find the whole beauty pageant concept kind of archaic and cheesy.
But like with many televised events (“American Idol,” “Dancing With the Stars,” etc.), who won, who lost, and who said what somehow ends up being reported as actual news.


So when I found out the next day over my morning coffee that the winner was Miss New York, Nina Davuluri, and that she was the first person of East Indian descent to win the crown, my reaction was something like, “Huh. Interesting,” after which I clicked over to see what Dilbert was up to.
The great slavering hordes of the Internet Ignoramii, however, were not so blasé. They immediately took to the Web and showed once again that the ’net disseminates stupidity at least as well as it spreads knowledge. Within moments of the announcement, Twitter blew up with the usual charming folks railing against the idea of a brown person winning the tiara.
“How the [bad word] does a foreigner win Miss America? She is a Arab! #idiots,” wrote one.
“Have we forgotten 9/11?” railed another.
“Congratulations al-Qaida. Our Miss America is one of you,” tweeted a third.
You know, unlike some people on the right who have sounded off recently in the national media and in the pages of this paper, I really am proud of my country. But I have to say I really do start to worry about it when a substantial number of its citizens can’t tell the difference between India and Arabia. Hint: Arabia’s the one with the sand, the camels and the oil, India’s the one with the trees, the cows and the call centers.

Apparently, Fox News Radio host Todd Starnes was miffed because his favorite, Miss Kansas, didn’t win. “The liberal Miss America judges won’t say this — but Miss Kansas lost because she actually represented American values,” Starnes said on Twitter and his Facebook page.
To be sure, Theresa Vail, of Manhattan, Kans., is pretty badass. She’s a veteran of the National Guard, a skydiver, a boxer, and a self-described “grease monkey” who also likes to hunt — with a bow and arrow. 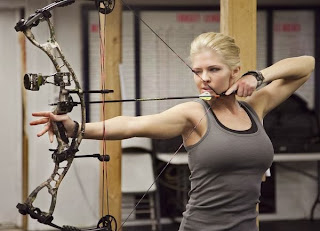 DAAAAAAMN....
She’s a scholarship student in chemistry and speaks fluent Chinese. She rocks a pair of very cool tattoos, which she refused to cover up for the swimsuit competition, saying that her platform was “empowering women and destroying stereotypes,” and that hiding her ink would be hypocritical.
I’d love to have a beer with her, although with that figure, she probably drinks light beer. What the heck. Just this once, I can forgive that. But Starnes and other critics of the choice seems to be saying that Miss Davuluri doesn’t “represent American values.”
Really? She was born in Syracuse, N.Y., to parents who immigrated here 30 years ago. She went to the University of Michigan, where she made the dean’s list, won the National Honor Society Award and the Michigan Merit Award, and graduated with a degree in brain behavior and cognitive science. She wants to become a doctor like her father, her aunt and several of her uncles. 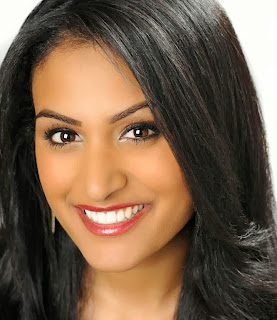 DOCTOR, DOCTOR, GIMME THE NEWS...
Smart, hard-working, focused — sounds to me like both Miss Vail and Miss Davuluri are all-American success stories. But one of them has brown skin and an exotic sounding name, and some people can’t seem to get beyond that, seeing her as just another strand in their ridiculous mental web of imaginary grievances and made-up resentments.
Fortunately, for every action, there is an equal and opposite reaction, and this applies on the Internet as well. The initial wave of racist posts and tweets was met by an even more ferocious wave of online support for Miss Davuluri and derision for the buffoons who can’t tell an Indian from an Arab — or a pretty, bikini-clad honors student from Syracuse from a bomb throwing jihadist.
Let’s let the new Miss America have the last word. Asked about the backlash, she said, “I have to rise above that. I always viewed myself as first and foremost American.”
And isn’t that the truest of American values?
Posted by JD Rhoades at Sunday, September 22, 2013 7 comments