Big Business vs. Religious Bigotry in Indiana: Guess Who Wins

You know, I’m hard on the Republicans sometimes. But it can’t be easy for them. It seems that Republican politicians keep getting caught in the middle between having to placate the almighty “job creators” whose money they can’t live without and the Religious Right, whose members provide them with those all-important primary votes.

Just recently, it happened again in Indiana.
The subject this time was the Hoosier State’s new Religious Freedom Restoration Law. RFRA, as it’s also called, is one of those laws passed to pander to the persecution complex of the most privileged religious people in the most privileged nation on Earth, who nevertheless are not happy unless they can equate themselves with Holocaust victims, antebellum slaves, or at the very least, black people in the pre-Civil Rights Act South, all because they have to deal with people who don’t think or pray the way they do.
RFRA on its face seems pretty innocuous. It basically says that the government can’t “burden a person’s exercise of religion” unless it’s for a “compelling governmental interest” and the means used is “the least restrictive means” to accomplish that goal. It’s the same sort of measure that allows the Amish, for example, to use reflective tape and kerosene lanterns on their buggies rather than electric safety lights.
Some people, however, fear (not without reason, as we’ll see below) that the law could be used to exempt businesses from local and state anti-discrimination laws and allow them to discriminate against people in the LGBT (lesbian, gay, bisexual and transgender) community.
The law’s passage led to an immediate backlash from the aforementioned “job creators.” The $4 billion tech company Salesforce announced it was “dramatically reducing” its investment in Indiana, including canceling all programs that required its people to travel there. Tech giant Yelp followed suit.
San Francisco’s mayor and Connecticut’s governor banned city- or state-funded travel to Indiana. The NCAA, which is holding this weekend’s Final Four basketball championship in Indianapolis, said it intends “to closely examine the implications of this bill and how it might affect future events as well as our work force.”
Even NASCAR, for crying out loud, spoke out against it. “We will not embrace nor participate in exclusion or intolerance,” it said in a formal statement.
As the pressure mounted, Gov. Mike Pence immediately took to the airwaves to claim he was shocked — shocked, I tell you — that anyone could think that such a nice, sweet law as RFRA could in any way countenance discrimination against anyone. He blamed the media for “sloppy reporting.” He tried to blame Obamacare, because, well, it’s Obamacare. At some point, he probably tried to blame Benghazi, too.
The governor’s protests might have been more convincing if so many of the law’s supporters weren’t insisting that the law DID give them the right to refuse service to LGBT people.
Micah Clark of the Indiana chapter of the American Family Association, for example, said as much in an interview with The Indianapolis Star. In an interview with Donald Wildmon of the AFA, Clark also urged Gov. Pence not to support efforts to “clarify” the bill to provide that it doesn’t allow discrimination, saying that that would “totally destroy” the law.
Eric Miller, of the right-wing organization Advance America, used the group’s website to crow “Victory at the Statehouse!” when the bill passed, because, he said, “Christian bakers, florists and photographers should not be punished for refusing to participate in a homosexual marriage!” ( I’m pretty sure he meant the wedding, not the marriage, but whatever).
It should be noted that Miller and Clark were among the few guests invited to the “private” signing of the bill. It’s more than a little disingenuous to claim that a bill isn’t meant to legalize discrimination when the people who’ll tell you that’s exactly what it was meant to do are standing behind you and smiling as you signed it. 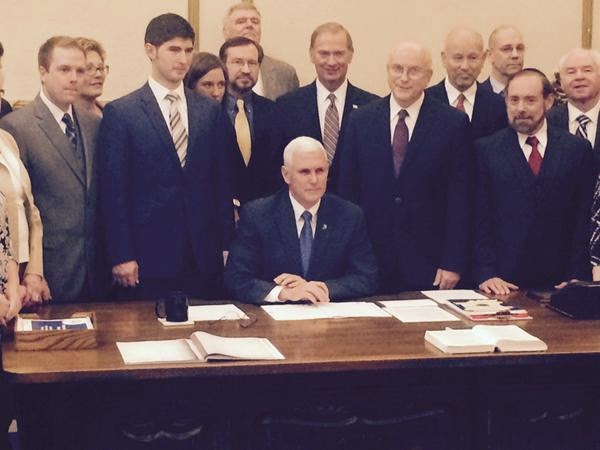 As of this writing (Wednesday evening), Indiana legislators were feverishly trying to come up with a “fix” so the law won’t mean what its supporters say it means. We wish them much luck.
By the way, this won’t be the last time this battle gets fought. Walmart, for example, has asked that the governor of Arkansas veto a similar RFRA measure there. (Funny, I always thought Walmart WAS the government of Arkansas).
We don’t know what will come out of this so called “fix,” but we do know one thing for certain: Hatin’ on the gay folks is bad for business these days. And that’s going to be a problem for the GOP.
Posted by JD Rhoades at Sunday, April 05, 2015 0 comments