The Well Truly Has No Bottom

You know, after my last column, I didn't think there was anyone who would be low enough to rise to defend the late Fred Phelps and the Westboro Baptist Church. When even the usual gang of haters fell silent (the ones who show up every week to tell me how uninteresting they find the column they read every week), I thought there would finally be someone so vile, even the wingnuttiest of the wingnuts wouldn't throw in their lot with them.

Thank you, ******* **** of Carthage, NC for your letter (yes, an actual mailed letter) that proved to me there actually are people in my own town who will defend picketing the funerals of slain children, murder victims, and soldiers fallen in the service of their country, all in the name of hate and in the name of God. Thank you, ******* **** of Carthage, NC for proving that the well of hate, ignorance and abject stupidity truly has no bottom.

PS: Thank you especially for attaching a copy of the column to your note, because I certainly would not have known what I'd written otherwise. Also thanks for attaching the obit from Time Magazine with the highlighted sentence that you think proves your point, but which actually does nothing of the sort. If you hadn't done that, I might not have realized I was dealing with a complete dimwit.

Yours in Christ, D

(Updated to remove the actual name, since this sort of idiot would use it to whine and play the martyr.)
Posted by JD Rhoades at Tuesday, April 01, 2014 0 comments

On March 19, Fred Phelps, founder and pastor of the Westboro Baptist Church, passed away in a hospice in Kansas. You have to admit, he was an easy guy to hate.

Members of the WBC became famous in recent years, not just for their virulent anti-gay stance, but in the way they expressed it: by picketing funerals.
Phelps and his crew started off by picketing in parks in their hometown of Topeka, Kan., because said parks were supposedly sites for gay activity. Soon they were making headlines for protesting at the funerals of gay murder victims, such as Matthew Shepard, waving signs that said that Shepard was in hell and especially that “God Hates Fags,” a phrase which became the slogan most identified with the church.
Quickly, however, they decided to expand the group of people they were trying to offend to, well, just about everyone. They began picketing the funerals of American soldiers killed overseas in 2005, because, Phelps said, combat deaths were God’s punishment for America’s “tolerance” of homosexuals.
I must confess, when I saw a picture of a WBC sign that said “Thank God For Dead Soldiers,” I had to wonder if this wasn’t some bizarre piece of performance art meant to discredit the anti-gay rights movement. (They also once picketed a store for selling Swedish-made vacuum cleaners — because, I guess, Sweden was too gay for them).)
But no, it eventually became clear that these wackaloons were serious. They picketed the funerals of people killed in the Sago Mine disaster. They picketed the funeral of Mister Rogers. They picketed the funeral of the 9-year-old girl killed in the same shooting that wounded Rep. Gabrielle Giffords. They stomped on the American flag at the gates of Camp Lejeune after the murder of Marine Lance Cpl. Maria Lauterbach (even though there was zero evidence that Lauterbach was gay).
Their philosophy could best be summed up by a song the church once recorded, a parody of “We Are the World” called “God Hates the World.” And everywhere they went, you saw Phelps grinning his ghastly death’s-head grin and looking like The Beast from “Poltergeist II.” 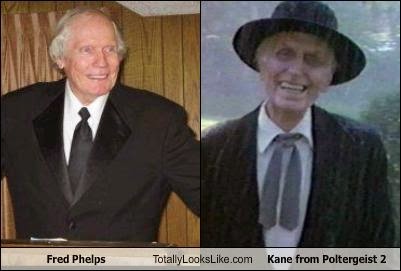 He was the living, hideous symbol of the worst hatred and bigotry in America, a man who made you grit your teeth whenever you admitted, as the Supreme Court ruled in one case brought against him, that freedom of speech extended even to the most egregiously offensive speech imaginable.
Now he’s gone. So how should we react to the death of someone so completely horrible? Quite a few tweets and Facebook comments called for either dancing or performing — shall we say — other functions upon Phelps’ grave. Others called for studiously ignoring the event.
My favorite suggestion, however, was from a former Baptist minister who came out a few years ago and now blogs under the title of “The Gay Christian”: “My final prayer is that people do show up to his funeral as a show of pageantry. I hope they show up with large, decorated signs and billboards. I hope they line the streets leading to the funeral home, and I hope that they make sure they are seen. Finally, I hope every one of those billboards and signs read, ‘We forgive you.’”
Now, I understand how that would be hard for some, and downright impossible for others. There’s no way anyone can judge a mother of a dead son or daughter targeted by Phelps if she can’t bring herself to forgive him and his followers for publicly insisting that her child’s death was God’s judgment or that the child was at that moment burning in hell.
But I had to smile when I saw the picture of a group of counter-demonstrators who showed up at the first WBC protest after Phelps’ death with a banner that simply said “Sorry for Your Loss.” 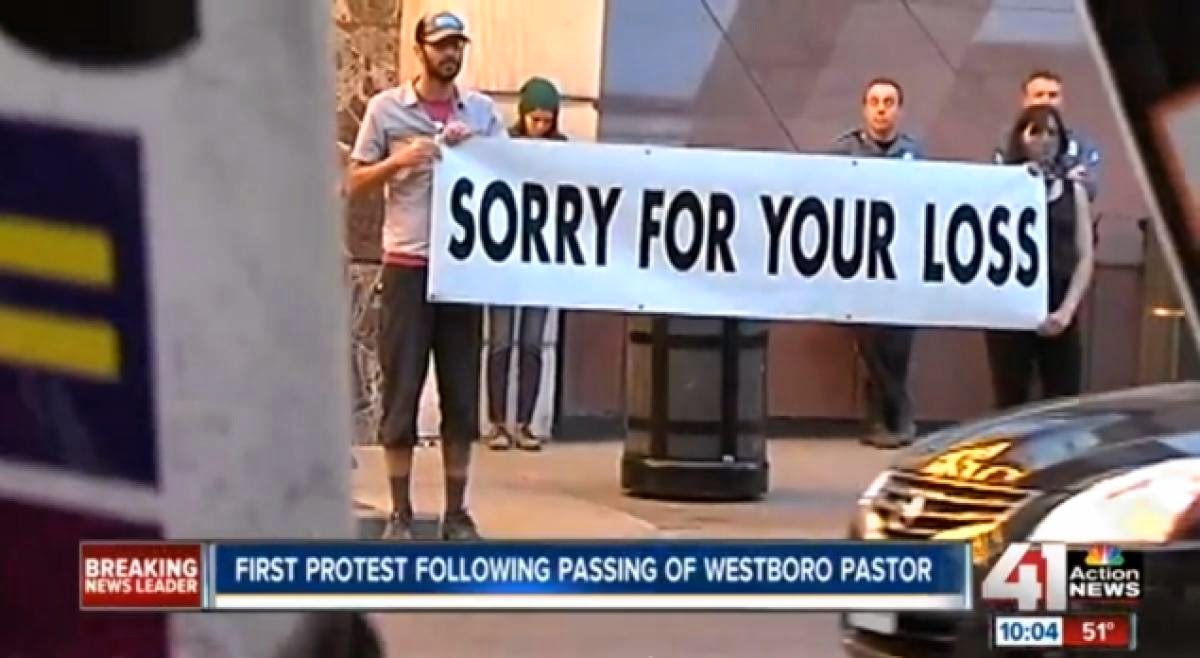 Fred Phelps once told an interviewer that if people hated him, he felt he was doing his job right. Maybe it’s time for people, every day, to show Fred Phelps, wherever he is, just how badly he failed, by not hating anyone, even him, the way he and his flock hated others.
Posted by JD Rhoades at Sunday, March 30, 2014 2 comments