An Etch a Sketch Candidate In an iPad World

I know, I know, I just did a column on Mitt Romney last week. But let's face it: The dude's a gift that just keeps on giving.
In this case, the gift to his opponents, both Republican and Democratic, came from Romney communication director Eric Fehrnstrom. It was the day after Romney's decisive victory in the Illinois Republican primary, and the Romnoids had fanned out across the various news and political shows to talk up their candidate.
Everything was going OK until a CNN host asked the fateful question: "Is there a concern that Santorum and Gingrich might force the governor to tack so far to the right it would hurt him with moderate voters in the general election?" To which Fehrnstrom replied "Well, I think you hit a reset button for the fall campaign. Everything changes. It's almost like an Etch A Sketch. You can kind of shake it up and restart all over again."
For opponents of a candidate who already had a reputation as a flip-flopper who'd say anything to get elected, the image proved irresistible.
Sales of the classic children's toy immediately took a jump as everyone associated with the Santorum, Gingrich, and Paul campaigns, not to mention every member of the Democratic National Committee, rushed out to purchase one, the better to (figuratively) beat Governor Romney over the head with.
A Santorum spokesman even showed up at a Romney event to pass Etch A Sketches out to reporters. Newt Gingrich gave one to a young boy at one of his rallies and said, "Now you can be a presidential candidate," which no doubt both pleased the youngster and confused him to no end.
Gingrich later said that if Fehrnstrom had "set out to highlight for everybody why we distrust Romney, I think he couldn't have done a better job." Of course, someone like Gingrich, who can say on a Tuesday that "any ad which quotes what I said on Sunday is a falsehood," doesn't have much room to complain about someone else's "resets."
The fact that no one in the supposedly liberal media has yet pointed out the rank hypocrisy of his statement may be because, once again, Gingrich's campaign has faded to the point where reporters have trouble remembering that he's still actually running, and the ones who do remember don't care.
The president, as of this writing, has not commented, although one liberal blogger has already put a virtual Etch A Sketch up on the Web, highlighting some of Romney's contradictory statements. I'll tell you one thing, though: If we don't see as many Etch A Sketches being waved about at the Democratic Convention as there were flip-flops being waved at John Kerry in 2004, then the Democrats need to find a new communications team.
Now, it's true that Fehrnstrom was simply stating one of the venerable principles of presidential politics: You play to your base to appeal to the true believers who vote in the primaries, then "tack toward the center" during the general.
The problem is, we don't live in an Etch A Sketch world any more. We live in the world of YouTube and Google, where everything is recorded, and everything is available forever. Heck, Jon Stewart and "The Daily Show" have based their entire shtick around it.
Say something that contradicts what you said six months, a year, five years, or even 10 years ago, and if it was ever on video, the legion of research gnomes who work for Stewart will have your contradictions on the air by 11 the next night, accompanied by Stewart's patented pained look at the camera, the look that says, as clearly as any words, "Does this person think we're as stupid as he is?"

In addition, with the "bases" of both parties getting both farther and farther apart, and more and more hardened in their respective positions, a candidate seeking to "tack toward the center" finds him or herself with a much longer distance to sail.
Fehrnstrom's statement reflects an older mindset, one that doesn't take into account the fact that these days, information is forever, the reset button doesn't work, and all your public history resides in the cloud. The icon for the modern political scene isn't the Etch A Sketch. It's the iPad or Android phone running the YouTube app and showing videos of everything you've ever said in public.
You can shake that bad boy all you want, but you can't make the stuff you don't want to admit to go away.
Posted by JD Rhoades at Saturday, March 24, 2012 6 comments

Cheesy Don't Even Begin to Cover It, Mitt

Folks who know me know that one of my biggest pet peeves is a badly done Southern accent. For example, don't ever ask me about the movie "Steel Magnolias" unless you want to hear a rant about the travesty that is Olympia Dukakis' attempt at a Southern drawl.
"Fake Southern" gets to me like fingernails on a blackboard.
But I've got to tell you, Mitt Romney's latest attempts at being "down home" as he campaigned in the South drew more winces from me than annoyance. It was just painful to watch.
I mean, the dude's got enough going against him being from Massachusetts (or, as it's more commonly known down here, "Taxachusetts"). The Bay State, like California, is one of those parts of this great country that conservatives, especially Southern conservatives, love to hate.
Plus, there's that whole "moderate" thing, plus the other "M" word (Mormon) that's guaranteed to make Southern evangelicals suspicious. As a friend of mine pointed out, the Southern Baptist Convention once spent more than $600,000 to send teams of missionaries - to Salt Lake City.
Still, I'm sure there were some people willing to put that aside, because they think Romney can beat Barack Obama in the general election. Unfortunately, when Romney tries to act natural around people who make less than a gazillion dollars a year, he starts behaving like some sort of badly programmed android sent here by an alien race to observe our primitive customs.
You may remember John Kerry's "who among us does not love NASCAR?" quote from 2004. As it turns out, Kerry never said that; it was entirely made up by columnist Maureen Dowd to mock Kerry's stiff speaking style. Dowd, however, could not have made up a more ham-fisted response than the one Romney gave when asked at the Daytona 500 if he followed racing.
"Not as closely as some of the most ardent fans," Mitt said, "but I have some great friends who are NASCAR team owners." That sound like distant gunfire you heard immediately after that was the sound of thousands of palms being applied to thousands of foreheads in disbelief. 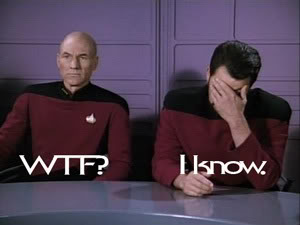 Later, in South Carolina, Romney told a restaurant owner who offered him some of the establishment's signature dish that he wasn't "a catfish man."
Now, I remember Chris Matthews going ballistic when told that Barack Obama had gone into a diner on the campaign trail and ordered orange juice instead of coffee. This was a sure sign, in Matthews' eyes, that there was something not quite right about Obama, even though millions of people order orange juice in diners all the time. That's why diners carry it.
Matthews has not been heard from so far on Catfish-Gate, which would be all to the good, except that now Romney's flip-flopping even on that. Campaigning in Alabama, he claimed, "I had catfish for the second time. It was delicious, just like the first time." Guess somebody rebooted the MittBot and added some new fish-friendly programming.
Of course, no attempt at pandering would be complete here in the South without some reference to grits, and Romney's no exception. In Pascagoula, he began a campaign appearance with a "mornin', y'all" that was so fake it made Olympia Dukakis sound like Randy Travis. Then he followed up with the claim that he'd started his morning off right with a biscuit and some "cheesy grits." What, no fatback 'n' hog jowls?
It's not uncommon, of course, for politicians to engage in cultural pandering. It's not even uncommon for them to do it badly, as Romney has (see "Kerry, John," above). What is uncommon is for them to do well by it, and the MittBot is no exception. He lost Mississippi and Alabama to Rick Santorum, even as his delegate count grows, increasing the likelihood he'll be the nominee.
Which leaves the Republicans with a potential Southern problem they haven't had to face in decades. Elections are often decided by voter turnout. General elections, as opposed to primaries, are often decided by being able to persuade not just your hard-core believers, but independent and moderate voters, to get out and vote. Those voters often make their decisions on gut feelings about whom they trust.
Will the true believers turn out to vote for someone they so clearly don't like and don't trust? Will the independents turn out to vote for such a transparent phony? Will dislike for a charismatic president hang on in an improving economy long enough to carry the day for the MittBot?
I have my doubts.
Posted by JD Rhoades at Wednesday, March 21, 2012 5 comments

I'm musing about pen names today over at the Thalia Press Authors Co-Op Blog. Check it out.
Posted by JD Rhoades at Sunday, March 18, 2012 1 comments