In late 20th century and early 21st century politics, what the public perceives visually - the "optics," in modern campaign-speak - is often as important, if not more important, as the actual words used.
It's said, for example, that people who heard the 1960 Kennedy-Nixon debates on radio were convinced that Nixon had won, whereas the people who saw them on TV saw a pale, sweaty, nervous-looking Nixon losing badly to the cool, urbane Kennedy. 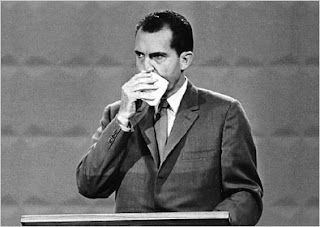 I thought of that event while watching the president's State of the Union address and the GOP response this past Tuesday. Thousands of words have already been written about the content of both speeches, but it's clear that it was President Obama who won the battle of the optics.
A lot of the president's message was positive: Six million new jobs. The auto industry in the best shape it's been in in years. Less foreign oil imports than in the last 20 years. Rebounding housing and stock markets. Manufacturers bringing jobs back to America from Japan, Mexico and China. Both parties working together to reduce the deficit by more than $2.5 trillion.
The president looked forward to and expressed hope for bipartisanship on things like immigration, joint business/government partnerships for research and development, and education. He looked as he usually does: calm, upbeat and confident, while Vice President Joe Biden beamed genially from behind him.
Meanwhile, House Speaker John Boehner sulked in his chair, looking like a man undergoing a painful and invasive medical procedure. He refused to join in standing ovations for veterans, school shooting victims, or even the 102-year-old woman who'd stood in line for seven hours to vote in Florida. 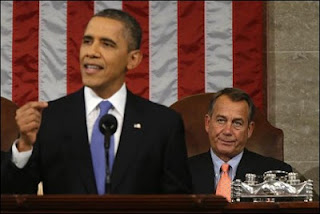 He looked less like a guy you'd want to have a beer with than the angry, bitter old man at the end of the bar who you'd want to stay away from unless you wanted to hear an hour of Scotch-fueled ranting about how terrible everything is, especially those damned kids.
Then came the GOP response, delivered by Florida Sen. Marco Rubio. Now, Rubio seems like a likable enough young man, but his speech was a visual disaster.
From the lighting that looked like something on public-access cable, to the sweat beading on Rubio's upper lip, to the terrible dry mouth from which he seemed to be suffering, the whole production was cringe-worthy. I used to work in a TV studio, and the whole mess made me wonder if the producer was an agent of the DNC.
Then came The Drink: the moment when Rubio looked around desperately for his water bottle, then ducked down nearly off screen to get it before gulping it loudly like a man who'd just staggered out of the desert.
And a joke was born. Within an hour, "Rubioing" - taking pictures of oneself drinking water or other liquids and posting them online - had become an instant fad. "Rubio's Water Bottle" suddenly had no fewer than 15 parody accounts on Twitter. Pictures proliferated of Rubio as The Most Interesting Man in the World from the Dos Equis commercials saying some variation on "Stay Thirsty, My Friends."

The message might have been able to overcome the visuals, had the response itself not been so pedestrian. It was standard Republican boilerplate, less a response to the actual State of the Union than a recitation of the familiar catch phrases and talking points that did so poorly in the last presidential election.
The "idea that our problems were caused by a government that was too small - it's just not true," Rubio intoned. It's also not what the president said. But then, Republicans are always more comfortable trying to refute points that were never made.
Really, though, why should something like The Drink get so much attention? The guy just wanted some water, right?
In a sane world, I'd agree. But we do not live in a sane world. We live in the age of the viral video and the Internet meme, an "optics"-driven environment where a politician who, like Rubio, is being touted as a potential presidential contender can't afford to look as awkward and amateurish as he did Tuesday night.
Can Rubio come back from it? Well, maybe. He did one very smart thing: join in the joke by posting his own water-bottle pictures on Twitter. And of course, Nixon won the presidency years later. But the difference is that Nixon's brand of paranoid conservatism had not yet come into its own in 1960, and wouldn't until after the upheavals of the '60s.
Nixon, sad to say, was ahead of his unhappy time. The demographics of a changing electorate have put Rubio and Boehner behind theirs. The best optics in the world can't change that.
Posted by JD Rhoades at Sunday, February 17, 2013 2 comments