Life Of Illusion (The Director's Cut)

[Note: this is the unedited version. The one in the paper eliminates the first paragraphs because the editor was afraid the Party of Love might firebomb the newspaper office.]

So now, at long last, the election is over, and President Barack Obama will have his second term. Before we get to our discussion of what happened and why, let me just take the time to say: HAHAHAHAHAHAAAAAA!

Ahem. On to the post-election analysis.

I’ve said before that Mitt Romney was destined to be the John Kerry of the Republican Party. Each man was a rich, entitled Massachusetts moderate trying to convince his party's skeptical base he was one of them, despite having once supported the thing that that base purported to despise most (the Iraq War in Kerry's case, the individual mandate in Romney's). Both Kerry and Romney ran against controversial incumbents, with a central message that amounted to “I’m not him.” And both fell short. But Mitt Romney fell much shorter than Kerry. Why? Perhaps because the “him” Romney was running against didn’t exist.

The imaginary Barack Obama that the Republicans were running against bore little or no resemblance to the actual man in the White House. Imaginary Obama was a scowling, far-left radical, a socialist, a fascist or a communist, depending on who was yelling into the mike at the time. Imaginary Obama was simultaneously an evil schemer who was plotting 24/7 to destroy America and a guy who was too dumb to get into college without affirmative action or to speak without a teleprompter. Imaginary Obama was a divisive, harshly partisan figure, hated by all, even his former supporters. Worst of all, he was an incompetent, a miserable failure at absolutely everything he touched.

The problem with this strategy is that the actual Barack Obama that non-delusional people could see was a smart, calm, moderate with good likability ratings who’d brought the unemployment numbers down at a steady if sometimes maddeningly slow pace, saved the auto industry, and brought Osama bin Laden to justice. People heard the Right dismissing every bit of good news, crying doom and gloom, and insisting “everything’s getting worse,” looked around, and went, “hmmm, it really isn’t.” 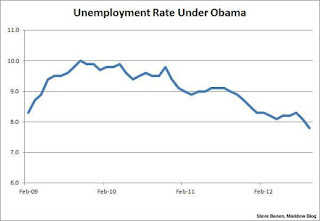 Then along came Sandy. The quick Presidential response to the hurricane and the grateful reaction of Republican New Jersey Governor Chris Christie, who only a few weeks before had been savaging Obama at the GOP convention, blew away any lingering doubts non-delusional voters may have had about both the President’s competence and his ability to work with Republicans.

As the polls showed the President pulling further and further ahead in crucial swing states, Republicans began pulling the blanket of delusion over their heads. Pundits like Dick Morris, Karl Rove, Michael Barone and even the usually sane George W. Will predicted a Romney landslide, with Will predicting 321 EVs for Romney.

One expects this sort of thing from hacks like Morris, Barone and Rove, but Will really should have known better. The polls were “skewed,” they insisted, because they assumed that Democratic voter turnout would be the same in 2012 as it was in 2008. That wasn’t going to happen this year, they asserted with the all the misguided and uninformed bravado of a latter-day George Armstrong Custer.

Actually, had you asked earlier in the year, I might have said you had a point. There were a lot of disaffected Democrats, particularly on the Left. (Anyone who says liberals all think the same has clearly never been around any). But that was before the GOP, some of its prominent supporters, and its candidates began taking extreme radical positions on things like abortion, contraception, gay rights, and immigration, and saying things that frightened, offended or ticked off Latinos, LGBT people, African-Americans, and especially women. That fired up the very constituencies the GOP had told themselves would stay home.

So thanks, Rush Limbaugh, Michelle Bachmann, Todd Akin, Rick Santorum, John Koster, Richard Mourdock, etc.! You fired liberals up and damaged the GOP brand with moderates, probably for years. And right wingers, dwelling as they do in their tightly woven cocoons where only Fox News and talk radio can penetrate, never even saw it. They still don’t. But numbers really don’t lie.

Now that the Republican leadership has failed in their stated number one goal of making Barack Obama a “one term president,” what will they do? Will they actually start pushing bills other than futile grandstanding attempts to “repeal Obamacare”? Will they actually deal in good faith on the budget?

Well, we live in hope. But first they’re going to have to do is stop deluding themselves that everyone hates the President and the Democrats as much as they think they do and that they’ll be rewarded for obstructionism. Reality, it’s said, has a well-known liberal bias, but it’s still reality.