My Open Letter to President Obama 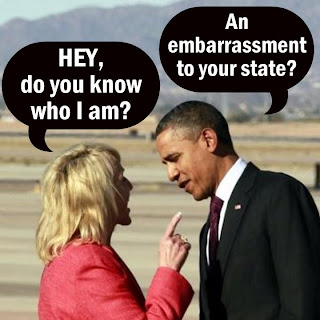 Dear Mr. President:
I saw a news story today about a little argument you apparently had with Governor Jan Brewer of Arizona. Apparently, you were unhappy with the way she described a meeting she'd had with you a while back. At the time, she'd said the meeting was "cordial," but in the book she said you were "patronizing" and "condescending." She apparently got a little heated up about it, and ended up shaking her finger in your face after which one of you stalked away, it wasn't clear which.
Now, Mr. President, I've always been a big supporter of yours. I haven't always agreed with you on some things, like Libya,  the public option, and the detention provisions of the NDAA,  but I agree with you on a lot more than I disagree. And even if we were discussing things I disagree with you about, I would never dream of being disrespectful or shaking my finger in your face. At least not normally.
But here's the thing. I also read that, after the finger-shaking incident, Governor Brewer's book " “Scorpions for Breakfast: My Fight Against Special Interests, Liberal Media, and Cynical Politicos to Secure the Border,’’ went from 285,568 on the Amazon sales list to 20.
20! That's the biggest one day jump in Amazon's history. Which leaves me with a bit of a conundrum.
As you may or may not know, I'm a published author in addition to being a lawyer and newspaper columnist. (If you weren't aware of this, just call up the guys downstairs and have them bring you my Homeland Security file. After all the stuff I said about the guy who was President before you, I'm 99% sure I have one).
The books have done okay. I've gotten some great reviews and letters from fans, and the respect of some of my fellow writers. That means the world to me. But, sadly, none of them have cracked the top 20,  at least so far.
I think you can see where I'm going with this.
See, I've always been one of those people who thinks outside the box. When something controversial occurs, and other people are saying "this is terrible, how could such a thing happen?" I'm thinking "how can I get me some of this?"
Like I said, I have nothing but respect for you. But could you do me a solid? I know you're probably going to be in North Carolina a lot in the coming months, what with it being a battleground state and all. One of those times, could I maybe come by and be a jerk to you? It wouldn't take too long, maybe a couple of minutes.
I'm not talking about any kind of threat or anything, because I don't want to get my butt kicked by the Secret Service or get indefinitely detained. But maybe I could make fun of your tie or tell you I don't like Al Green or something. A little sneer, a little finger shake, I'd flounce off, and we'd be done.
If I could do that, and if we could make sure that there are cameras there, I'll bet my sales would go through the roof. I might get invited on Jon Stewart or Conan or even--dare I say it out loud?-- Craig Ferguson. Like I say, I wouldn't normally even dream of asking something like this, but it's always been a dream of mine to leave the day job behind and write full time, and this may just be my ticket.
The books, by the way, are The Devil's Right Hand; Good Day In Hell; Safe and Sound; Breaking Cover; Storm Surge; Lawyers Guns & Money; and the new one, Gallows Pole. All are available in Kindle and Nook formats. I think we can both agree that those are much snappier titles than “Scorpions for Breakfast: My Fight Blah Blah Blah." They also make great reading on airplanes. Just saying.
Thanks, Mr. President. You're the best.
Your fan,
J.D. "Dusty" Rhoades
Posted by JD Rhoades at Friday, January 27, 2012 4 comments

Supervillain or Newt shows you an idea and asks you to decide: does the idea come from an insane megalomaniac bent on world domination, or from a fictional supervillain?

Year of the Water Dragon

In a Dragon year, everything is magnified tenfold. And after the rather meat-and-potatoes Metal Rabbit year we just lived through in 2011, we are in for the ride of our lives. Commotion, turmoil and general hullabaloo will characterize the Dragon year ahead. As of January 23, 2012, better get ready to rock and roll -- or else crawl under a rock until it's over.

Think of the Water Dragon year as a 12-month-long, bumpy road with interludes of elaborate and joyful festivity. Fortunes will be made and lost with lightning speed. All events will be charged with a rare intensity. In short, 2012 will be a year of derring-do, hell-raising and exorbitant fun. Dragon years are favorable for the enterprising and ambitious. If you want to succeed at something major, start early in the Dragon year. Don't give up. Express yourself openly. Show no fear. In China, it is said that the Dragon year brings luck to those who dare to speak out, to take charge and even to take over. Dragons are fearless and direct to a fault -- but they are not without ruse. They're clever go-getters who are always in the running for first place. They want to excel at every endeavor. Dragon years, therefore, are propitious for people who have the courage to take risks, to stand fast in the face of danger and hold firmly to their principles. For those among us who are timid and shy, who shrink in the face of challenge and who daren't speak up for what it is they want, Dragon years can be rigorous and even a little bit frightening at times.
Time to be fearless, folks. Time to put aside the doubt and uncertainty and pain of the last year, to grab the dragon by the whiskers, go forth and conquer.
Happy year of the Water Dragon!
h/t to Balloon Juice
Posted by JD Rhoades at Monday, January 23, 2012 1 comments

There Is Such A Thing As A Stupid Question

It is often said, mostly by people in the field of education, that "there are no stupid questions." This, of course, is simply not true. In fact, in the real world, stupid questions abound. "Why do they have to ask my name and credit card number when I call the psychic hot line?" is a stupid question.

Once when I was whitewater rafting, the guide warned us about a particularly dangerous rock formation. An unlucky rafter, she told us, had fallen out, gotten wedged under the rocks in the turbulent water, and it took three weeks to get his body out. A cute blonde girl from the back of the boat piped up: "Was he all right?" That was a stupid question.

You expect stupid questions from a certain subset of cute blonde girls and from the type of people who call psychic hot lines. One does not, however, expect truly brain-dead questions from the "public editor" of The New York Times.

Unfortunately, said "public editor," whose name is Arthur S. Brisbane, recently asked such a mind-bogglingly idiotic question that the majority of readers responding could not believe it had even been asked.

In his column of Jan. 12, titled "Should The Times Be a Truth Vigilante?" Brisbane wondered if "Times news reporters should challenge 'facts' that are asserted by newsmakers they write about." As one example, Brisbane cited the frequently made (and utterly false) claim made by Mitt Romney that President Obama has made speeches "apologizing for America."

This statement by Romney is blatantly untrue. It is, to put it plainly, a lie. Brisbane noted that Times columnist Paul Krugman called Romney's statement an example of "post-truth politics," along with other Romney canards like the one about how he'll reverse Obama's "massive defense cuts." (The defense budget has grown steadily every year so far.)

All well and good for an op-ed columnist, Brisbane said, but should a reporter do the same? Should a reporter, confronted with a statement like Romney's that is factually untrue, inform his or her readership that "the president has never used the word 'apologize' in a speech about U.S. policy or history," or that "any assertion that he has apologized for U.S. actions rests on a misleading interpretation of the president's words"?

The reaction from The Times' readership, bless them, was sharp and immediate.

"If you truly have to ask this question," a reader from Seattle wrote, "then you seriously need to think about a job change." A reader from Georgia was even more direct: "You can't be this stupid."

Perhaps the most pointed comment was made by "Stuart" from Riverside, Calif.: Was the question being asked "because NYT reporters perceive they have a real conflict between reporting the truth and being rewarded with approbation, access, career advancement and privilege by the people who benefit from the falsehoods?"

You have whacked the nail on the head, "Stuart" from Riverside, Calif. The biggest problem with the press right now, and the one that does the most to threaten our democracy, is not that they're liberal or conservative or even corporate. It's that the people tasked with reporting the truth are too close and too chummy with the people they're supposed to be watching.

Reporters who point out that a politician is lying through his or her teeth don't get invited to barbecues where the candidate lets them swing on his tire swing and makes them baby back ribs, like the "reporters" who were supposed to be covering John McCain.

They don't get invited to the cool parties at the White House. They don't get those juicy little exclusive tidbits that press secretaries feed them if they've been good little toothless lapdogs. So what you get are "reporters" who become nothing more than stenographers, taking down the lie du jour and passing it along without analysis or comment.

At best, what you get is "some say this, but others say that," without anyone bothering to ask, "Well, which is factually true?" But that's what we need reporters to do: Tell us the facts, don't just recite what some press flack has told them.

Comedian Bill Engvall has built his signature routine ("Here's your sign") around people who ask such ridiculously obvious questions that they ought to be required to wear a sign that says "I'm Stupid." So, Arthur S. Brisbane of The New York Times, I say to you: Here's your sign.