New York State Senator Roy McDonald (R-Saratoga):
"You get to the point where you evolve in your life where everything isn't black and white, good and bad, and you try to do the right thing.
"You might not like that. You might be very cynical about that. Well, fuck it, I don't care what you think. I'm trying to do the right thing.
"I'm tired of Republican-Democrat politics. They can take the job and shove it. I come from a blue-collar background. I'm trying to do the right thing, and that's where I'm going with this."
If you're in New York and you care about human rights, send this guy some "atttaboys."
And this guy, too while you're at it:
Posted by JD Rhoades at Saturday, June 25, 2011 1 comments

The Jokes Just Write Themselves

Report: Sarah Palin quits bus tour halfway through, retreats to Alaska | The Raw Story: "WASHINGTON – Amid diminishing media interest, Sarah Palin has quit her high-profile bus tour halfway through and returned to Alaska with her family, according to RealClearPolitics."
Wow. Who would have thought that Sarah Palin would give up on something halfway through?
Apparently, Bachmann's announcement (and probably Weinergate) took the spotlight off her, and without the spotlight, it's just no fun anymore. So she pulls the plug.
And there are people still insisting that this flake could be President of the United States.
Don't worry, though. She's addicted to attention, and the addict's got to have her fix. Pretty soon she'll say something stupid or inflammatory, or both, and the media circus will start up again, complete with the usual crowd of ninnies bleating about how all the attention being lavished on her for being ridiculous actually means she's serious.
Posted by JD Rhoades at Wednesday, June 22, 2011 0 comments

Jon Huntsman Kicks Off Campaign (VIDEO)
You know, if he had a chance in hell of getting the nomination, Barack Obama might have something to worry about in Jon Huntsman. He's smart, articulate, a fiscal conservative, and he's got some serious credentials, as well as good hair. Not as good as Romney's, but still very presidential hair.
But there's no way in hell the teabaggers and other crazies will let a guy who said he'd accept an individual health insurance mandate, believes in addressing the problem of global warming, and has actually worked for Barack Obama through the primary process.
Dead man walking, Jon. Dead man walking.
Posted by JD Rhoades at Tuesday, June 21, 2011 3 comments 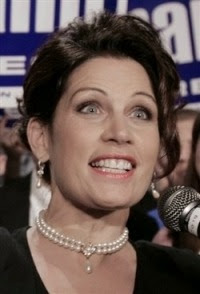 So another Republican candidates’ debate has come and gone, and the GOP’s newest rising star is Mrs. Crazy Eyes herself, Mrs. “Armed and Dangerous,” Mrs. “we need to slit our wrists to stop health reform”: Congresswoman Michele Bachmann.

The consensus is that Bachmann “stole the show,” first by announcing her candidacy at the outset of the debate (as if being at the debate itself wasn’t announcement enough), and then by doing better than anyone expected. That is to say, she didn’t say anything egregiously stupid or inflammatory. Plus, she managed to look into the right camera this time.

Actually, that last part may not be a good thing. I can’t help it; every time I look at Bachmann’s wide, blank eyes, I get a chill down my spine and a flashback to Martin Sheen’s insane president character in the movie version of “The Dead Zone.” (“Mr. Vice President, the missiles are flying. Hallelujah! Hallelujah!”) But right now, the right loves them some Bachmann. I’ve started calling it Bachmannia.

Bachmannia, like its predecessors Trumpmania and the short-lived Newtmania, arises out of the right’s desire to find a candidate who’s ABR — anyone but Romney. An awful lot of pundits seem to regard Mitt Romney as the guy to beat. He’s got the money, he’s got the organization, and he sure does have good hair.

But this time around, Romney’s got the same problem he had last time, as far as primary voters are concerned: a lack of ideological purity. As governor, he supported a regional “cap-and-trade” compact to reduce greenhouse gases and global warming.

Not only was his so-called “Romneycare” plan cited (repeatedly, and with great glee) by Democrats as a template for federal health care reform, but the “Commonwealth Care” health insurance program for low- and moderate-income Massachusetts residents also provides coverage for (horrors!) abortion.

He’s always been against gay marriage, but he once sent a letter to the Log Cabin Republicans stating, “We must make equality for gays and lesbians a mainstream concern” and promising that he’d be a stronger advocate for gay rights than Teddy Kennedy.

None of this would likely hurt Romney in the general election, so long as he stuck to the “cut taxes” mantra that’s become the GOPs’ version of the Jedi mind trick — say it enough times in a deep, assured voice and the voters will believe any other damn fool thing you tell them.

Unfortunately, the modern Republican Party is not being run by sane people. Dick Armey’s Freedomworks ­organization has threatened to unleash the hounds (and part of the group’s $25 million war chest) to bring Romney down. Conservative activist Joe Miller, of Alaska, has already registered the domain name StopRomney.com. And so on.

Some political analysts are predicting that the only way Romney’s going to blunt those attacks is to have what little spine he has completely removed and grovel like a whipped cur to the wingnuts. He’s well on the way; his twists and turns as he tries to explain why an individual insurance mandate in Massachussetts is reasonable, rational health care reform, but it’s Hitler-level tyranny as part of “Obamacare,” would be hilarious if they weren’t so pathetic.

I’ve got news for Mitt, anyway: Kissing up to these people never works. When true believers hate, they hate deep and they hate forever. As Democrats never seem to learn, trying to placate the right only earns you more contempt.

If Romney actually had the gumption to stand up to the far right (or do what the Democratic Party establishment does to its far left wing, i.e., ignore them), he might have a shot at winning the general election. But so far he’s showed no signs of having anything like that kind of courage.

It’s the Republican dilemma: Anyone moderate enough to draw the independent voters needed to win the general election has no chance of getting past the wingnut gauntlet known as the GOP primaries. So they may very well end up with Bachmann or someone equally out to lunch.

Then their only strategy for victory is to do what they so often falsely accused liberals of doing: hoping for America to fail. They’ll hope for America’s economy to remain sluggish, for unemployment to remain high, or even for an actual double-dip recession. At which point, even sane people will be angry enough and desperate enough to put a complete lunatic like Bachmann in charge.