Crimes in Southern Indiana: Stories by Frank Bill
My rating: 5 of 5 stars

You might try to comfort yourself by thinking that Frank Bill's exaggerating for dramatic effect in these short, tightly written tales of country meth addicts, domestic brutality, dog-fighters, unpredictably vicious rednecks, and rural ultra-violence. You might try to tell yourself that things this grim and lurid could never happen in real life. But I can tell you, they do.


This is not a book for the faint of heart; it's pure distilled essence of redneck noir, and there are few happy endings. But the quality of the writing keeps you coming back for just one more page, then another, until it's all gone, like a bottle of cheap whiskey that you can't put down and that's gone all too soon.


I got this book for Christmas, and Frank Bill just made it to the top of the "Buy As Soon As It Comes Out list."

Jesus Probably Wasn't Born Today, But So What?


Well, here it is, December the 25th. Christmas Day. Since I can assume the first thing most of you did was NOT run out to the driveway, get your copy of The Pilot, and run inside to read this column, I figure the stockings are empty, the presents all opened, the turkey or ham or whatever your choice of holiday meat is either in the midst of cooking or resting comfortably in your tummy. Unless you're Jewish, of course, in which case I hope you have a good day and are enjoying your Hanukkah and the Chinese food.

Some pedantic souls are fond of pointing out that it's highly unlikely, based upon the account in the Gospels, that the actual birth date of Yeshua bar-Yosef, aka Jesus, was December 25th. For instance, shepherds in first century Israel did not  "abide in the fields and watch their flocks by night" in the wintertime; that happened in the spring, when the lambs were born.  In the winter, the sheep were kept corralled, and the shepherds stayed home. The angels would have had to come to the door and knock to announce the birth of the Savior in the City of David,  like some sort of divine Western Union. It's a much less compelling image, to be sure, than the one of the Heavenly Host filling the sky with praises.

No, we're told, the December date was much more likely picked to coincide with (and hopefully take the place of) already existing pagan festivals. They'll point to the fact that sometime in the fourth century A.D. the Roman Emperor Aurelian announced the feast of Sol Invictus (The Unconquered Sun) which took place on December 25th. 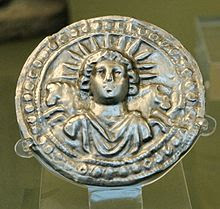 Or perhaps the celebration of Christ's birth was meant to occur at the same time as an older Roman holiday, that of Saturnalia, a week-long debauch beginning December 17th. During Saturnalia, people exchanged presents and partied in a fashion that makes even the rowdiest office Christmas party look like an ice-cream social.

In addition, the normal social order was turned upside down; masters served their slaves at the dinner table, and the slaves could boss them around for a change--carefully, one would imagine, since they'd be back on the bottom of the pile next week.

Others suggest that our Christmas was meant to overlap Yule or other Northern European holidays celebrating the Winter Solstice. Those are the holidays from which we get our traditions of bringing evergreen plants indoors, of mistletoe, and of the blazing Yule log (fa-la-lalala, and all that).

I think, however, that the argument  that late December isn't the "real" date of Jesus' birth and that it's really just a date co-opted from paganism kind of misses the point. All of those seasonal pagan celebrations have one thing in common: they take place during the coldest and darkest time of the year in the Northern Hemisphere, the time when the night seems endless, the cold seems eternal, and it seems as if nothing will ever grow again. But they don't curse or bemoan the darkness; they look forward to the return of the light. They're celebrated with candles and firelight and evergreens. They remind us that however long the winter may seem, spring always comes back. They're holidays dedicated to hope when everything looks hopeless.

And that's why it's the perfect time to celebrate the birth of Jesus, no matter if it's more likely that He was born sometime in the spring. Whatever your belief as to the divinity of the person known as Jesus, it's undeniable that He was born at a time of great darkness and cruelty, in a country beneath the boot of an empire so brutal that they routinely nailed people to pieces of rough wood then hung them up to die slowly as punishment. And yet, His  message was one of peace, of healing, of love, and of hope. It was a message of light in the darkness.

So, no matter what your beliefs, or lack of same, I wish all those things for you today.