I think I'm going to print out this post over at nakedauthors.com and tape on the cabinet over my computer. It tells the story of Nancy Davenport, a member of the writers group to which blog contributor Jacqueline Winspear belongs. Nancy, 72 years old, was working on a memoir when she was diagnosed with Lou Gehrig's Disease.

As she lost the ability to speak, Jacqueline writes, so her voice on the page became louder – and still she came to class until she could walk no more.

Nancy finished the book, and actually got to hold it in her hands a few days before she died.

Too tired to write? Not really feeling well, so maybe you'll write tomorrow? Just not all that inspired today?

To Nancy Davenport: a writer with cojones bigger'n my head.

"Normally under Bush, promoted-above-your-abilities incompetence is not a firing offense unless, of course, you drown an entire city. "
Walter Shapiro, writing at Salon.com about Porter Goss' abrupt resignation
Posted by JD Rhoades at Saturday, May 06, 2006 0 comments 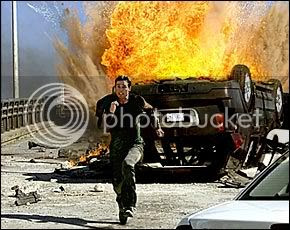 WFHIT has obtained this exclusive picture of Porter Goss' "exit interview" with the CIA....
Posted by JD Rhoades at Friday, May 05, 2006 0 comments

Gee, I wonder what pushed him over the edge. Was the fact that the agency is hemorrhaging experienced operatives who are leaving in droves under Goss' "leadership"? Was it the open revolt of one retired agent after another over Dubbya's politicization of intelligence? Or is the Hookergate story getting ready to bust wide open?

Well, I finally got off my ass (and got my finances in order) so that the supremely talented Beth Tindall and her crack team of Web-elves at Cincinnati Media could create the new, improved and very-cool-if-I-do-say-so-myself JD Rhoades official website. There may be a tweak or two still to come, but the main content is there.

Thanks to Beth for her endless patience and her mad web skillz.
Posted by JD Rhoades at Thursday, May 04, 2006 1 comments

Garrison Keillor has a great essay in Salon.com about writers who whne and complain about how hard it is, about the agonies of the creative life. To which he replies:

Get a job. Try teaching eighth-grade English, five classes a day, 35 kids in a class, from September to June, and then tell us about suffering.

The fact of the matter is that the people who struggle most with writing are drunks. They get hammered at night and in the morning their heads are full of pain and adverbs. Writing is hard for them, but so would golf be, or planting alfalfa, or assembling parts in a factory.

Keillor's right. I don't think he's saying writing is easy...it's not. But it's easier, say, than working with hot tar on a sunny summer day in Florida. But today's quote doesn't come from the article, but rather from the comments section, in which writer Lev Raphael says:

I've always found writing to be a joyful, fulfilling, exciting experience--as good as sex with half the clean-up.

Send In the Clowns...Don't Bother, They're Here

So it sees that King George and his Court were upset at Stephen Colbert's brilliant comedic performance at the White House Correspondents' Dinner.

What part of "satirist" do these people not understand? If the Boy King and his lackeys are such thin-skinned little girly-men that they can't take getting their noses tweaked a little at a dinner where the idea is to poke fun at people, then maybe next year they should just hire a clown who makes balloon animals or something.
Posted by JD Rhoades at Wednesday, May 03, 2006 6 comments

How I Didn't Become the New Press Secretary

As I’m sure you are aware, there’ve been some big shakeups at the White House lately.

First, Chief of Staff Andy Card resigned and was replaced by Josh Bolten. Then the dominoes began to fall. Deputy Chief Karl Rove’s duties were shifted from “policy” to “politics.” Then longtime White House Press Secretary Scotty McLellan announced that he was stepping down.

I couldn’t help but see Scotty’s departure as a major opportunity. After all, as a semi-professional journalist my ownself, I figured I’d have a natural rapport with the other ink-stained wretches of the press.

(Actually, in the modern world, where all the reporting is done on laptop computers, maybe we need a new term for the press. “Laser-toner stained wretches,” maybe? But I digress.)

In addition to the sterling journalistic credentials I’ve won by virtue of this award-winning column, I also, as you may remember, recently became a Republican, so I’ve got that going for me. So I figured, hey, why not? How hard can being Dubbya’s press secretary be? So I rang them up.

“For national security reasons, I’m not permitted to discuss that.”

“Excuse me, sir? What position did you say you were calling about?”

“We’ve already been over that, ma’am. Several times. But I can tell you that the world was changed on Sept. 11, when terrorists …”

“Oh, right. That would be the press secretary position. Hold, please.”

After a moment, a gruff male voice came on the line. “Who is this?”

“I don’t think that’s the kind of question the American people are really interested in. After Sept. 11 …”

“I like your attitude, son,” the voice said. “Be here at 3 p.m. tomorrow for an interview.”

I was overjoyed. I was going to the White House! I threw a clean suit in the airline bag and hopped the next plane to Washington. As I got off the plane, two very large men in dark suits and sunglasses stepped up on either side of me.

“Are you Rhoades?” the one on my left demanded.

“I have heard those allegations,” I said, “and they are reckless and irresponsible.”

“Come with us,” the other one said.

They didn’t give me time to comply, but instead picked me up by my elbows and carried me through the airport, my legs pumping comically in mid-air. They quickly whisked me into a waiting long black limousine and popped a bag over my head. After a long ride, they hauled me out of the car and down what sounded like a long corridor.

They plopped me in a chair and yanked the bag off my head. I was seated before a scowling old man sitting behind a desk. He was ostentatiously cleaning a shotgun.

“Shut up,” he snarled. After a moment, he said “So you want to be the presidential mouthpiece, eh?”

“I’m not going to get into personnel matters. There is a process in place, and when it is completed, there’ll be a press secretary.”

“Not bad,” he grunted. “Let’s try this one. Say Karl Rove just got indicted …”

“It’s a hypothetical situation, you idiot! Anyway, if Karl Rove gets indicted, what do you say?”

That one was easy. “We can’t comment on an ongoing criminal investigation,” I said promptly.

“And … no one wants to find out the truth more than the president.”

“And if someone asks you why the president doesn’t just ask Karl Rove what he did or didn’t do if he wants to know the truth?”

“I can’t comment on internal meetings between the president and his staff.” I said.

“You’re pretty good at this,” he said.

“I don’t think that in the post-Sept. 11 world that the American people want to know about who’s good or bad at the job of ...”

He looked me over carefully. “Let’s do a little word association. I’ll say a word, and you tell me the first word that pops into your head. Okay?”

“Are you people out of your cotton-pickin’ minds!?” I blurted.

“I knew it!” he roared. “Traitor! Terrorist sympathizer! You want us to get hit again!” He raised the shotgun and fired. I barely had time to dive to the floor as the birdshot blew the overstuffed chair into confetti.

I scuttled for the door as he fired again. This shot blew splinters out of the door above my head. I managed to get the door open and flee as he was reloading.

So, long story short, looks like I won’t be the new White House press secretary. And after my weeks of service to the party, too. Oh, well. I hear there’s going to be an opening soon at Treasury.
Posted by JD Rhoades at Sunday, April 30, 2006 3 comments