Jeroen ten Berge has done it again! Check out the cool new covers for the Kindle editions of  Good Day In Hell and Safe and Sound: 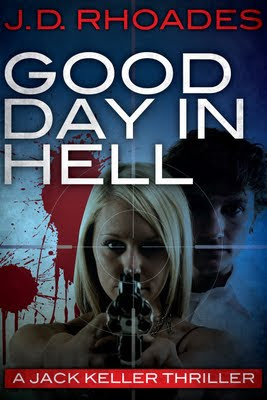 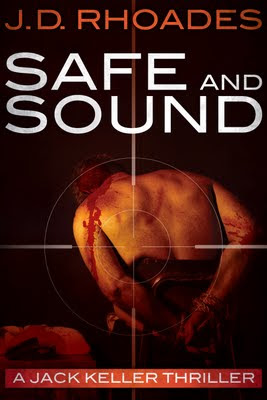 Letters, Oh I Get Letters

Today in The Pilot:

Dusty Rhoades’ petulant column attacking Michele Bachmann and Mitt Romney (June 19) displays a prepubescent proclivity (for name-calling), when rational, cogent analysis would be the most powerful way to pose one’s argument.
Indeed, character assassination is the last refuge of a mind sadly bereft of ideas.
Dixie Chapman
Pinehurst
I always love the people who write in, excoriating a satirical column for not being serious enough.
Hey, Dixie, I do cogent analysis and argument, but for a hell of a lot more money that The Pilot pays me. For these prices, snark and mockery are what you get.
In conclusion, let us remember the immortal words of Sgt. Hulka:
Posted by JD Rhoades at Friday, July 01, 2011 2 comments

One of the things that's been so dismaying about Mamet's recent screeds is not that he's embraced conservatism, but that he seems to have taken up the most angry, bitter, condescending, and intellectually dishonest form of it. As Hitchens puts it:

By now, perhaps, you will not be surprised to know that Mamet regards global warming as a false alarm, and demands to be told “by what magical process” bumper stickers can “save whales, and free Tibet.” This again is not uncharacteristic of his pointlessly aggressive style: who on earth maintains that they can? If I were as prone to sloganizing as Mamet, I’d keep clear of bumper-sticker comparisons altogether.


Wham.
Hitchens, as is his wont, acknowledges his own exasperation with what he calls "the pieties of the left," but he also has little patience with "Mamet’s commitment to the one-dimensional or the flat-out partisan."  He also touches upon  my other reason for dismay at what Mamet's been up to lately: the man who's penned so many great words of his own seems content now to parrot the work of far inferior wordsmiths like Glenn Beck.


The whole thing is worth a read. I may not always agree with Hitchens, but I'm convinced reading him makes you smarter.
Posted by JD Rhoades at Thursday, June 30, 2011 2 comments


I'm usually not a fan of the serial killer genre, but this one's a good solid read. Jonathan Hayes' debut introduces Edward Jenner, who, like Hayes himself, is a Medical Examiner in New York City. Hayes has a very deft hand; he puts in just enough detail, about pathology and about life in his beloved New York, to keep the reader's interest without slowing the story down.

The main thing that makes or breaks a serial killer novel is the killer himself. At first I was afraid  Hayes' villain, who starts off by literally nailing a pretty young college student to the wall of her apartment,  was going to be a "behold my power and glory" nutcase lifted straight out of RED DRAGON. Eventually, however,he gets his own scary voice and his own twisted backstory.

Patriot Acts by Greg Rucka
My rating: 4 of 5 stars

First off, you need to be warned: this book is actually the second half of the story that began in Critical Space; it picks up literally minutes after the end of that book. If you did what I did and start reading Patriot Acts before its predecessor, you're not going to know what the hell is going on or why you should care. This pissed me off more than a little, since there is no indication anywhere on the cover or inside of the edition I got that this is the case. Nevertheless, I bit the bullet, went back, and read Critical Space. So this review can be considered as applying to both books.
Bodyguard Atticus Kodiak is back. This time, he's hired in a rather unconventional way to protect an extremely unconventional client: the international assassin code-named Drama, who almost killed him in Smoker. Drama's retirement is being disrupted by someone who's out to kill her, and Atticus, the only person who's ever beaten her, is the only one she trusts. But when your life becomes entwined with that of a stone killer, there's really no way to avoid becoming one yourself...
The story moves along at a blazing pace (with one exception, a scene in Critical Space where Drama is trying to get Atticus alone by sending him all over New York City, that just seems to go on forever). The prose is lean and tough, and there are moments that pack a real emotional wallop. I'm not quite sure I buy the rationale for part of the plan near the end of the book,other than to provide one of those wallops, but by that time, I was invested enough in finding out how it ended I let it slide.
Greg Rucka writes thrillers like nobody else, and Critical Space/Patriot Acts is him at the top of his form.
View all my reviews
Posted by JD Rhoades at Monday, June 27, 2011 3 comments

I started using Facebook a few years ago, when the conventional wisdom in the writing community was that social networking sites like Facebook and MySpace were great marketing tools, a fun and easy way to connect with readers. I have to confess, I got hooked fast.

These days, I check it — well, let’s just say I check it quite a few times to find out what my friends (both the real-life ones and the ones I only know from online) are up to. Like a lot of people, sometimes I wonder if maybe I do it a bit too much. But I have to say, after reading the story of 36-year-old Jason Valdez, of Salt Lake City, I feel a whole lot better about myself.

When police came to serve a felony warrant on Valdez, he decided that he wasn’t really into the whole going-to-jail thing right then. He barricaded himself in his hotel room with a pistol and a young woman and held the cops off. As the SWAT teams gathered, Valdez apparently decided that something like this was just too awesome not to share, so he got on his Android smart phone and started posting status updates to Facebook.

“I’m currently in a stand off wit these shady [expletive] from old,” Valdez posted. (“Old” apparently was a typo; he later posted that he meant to write “opd” for Ogden Police Department. Given the circumstances, one can probably understand a little fumble-fingered typing.)

He went on: “Kinda ugly but ready for whatever, I love u guyz and if I don’t make it out of here alive that I’m in a better place and u were all great friends.”

His Facebook pals and family members immediately gathered round, some urging him to “do the right thing” and “end this peacefully,” while some helpful souls provided tactical advice from nearby. (“Gunman in the bushes, stay low.”)

Over the next 16 hours, Valdez posted six status updates, responded to numerous messages, and added 15 new Facebook friends. He even uploaded a picture of himself with his supposed “hostage,” who, truth be told, doesn’t look like she’s under that much duress.

Eventually, the standoff ended as so many of them do, with the SWAT team busting in. Valdez apparently attempted suicide by shooting himself in the chest. He’s now in critical but stable condition and is expected to survive. We have to rely on press releases, however, because I’m reasonably sure the cops took his phone away.

Yes, it’s a new age, the age where people can’t do anything without letting the world know, an age where even desperados will take time out during a standoff with the cops to give a hearty “wazzup?” to their buddies. One wonders what it would have been like if social networking had come along earlier in history...

— Ugh the Caveman: “Find flint. Make fire.” … Thrag the Other Caveman: “U make fire, me carry away your woman LOL.”

— Moses: “Could have sworn Aaron had the map. Guess we’ll find the place eventually.”

— Odysseus: “Waiting. Hotter than Hades inside this freaking horse. Wish Ajax & Diomedes hadn’t had 2d helping of beans for lunch.”

— Julius Caesar: “Headed down to Senate for big Ides of March party. Little nervous about what soothsayer said, but my bros Brutus & Cassius tell me they’ve got my back.”

— Mary: “In labor, in a stable. I swear, this is the last time I let Joseph make travel reservations.”

— Alexander the Great: “Just figured out there are no more worlds to conquer. Bummer.”

Now, if y’all will excuse me, I have to go check up on my Facebook page. It’s for marketing. Yeah. Marketing. Let’s go with that.