"To be clear. I believe in evolution and trust scientists on global warming. Call me crazy." In a sane world, this sort of pronouncement wouldn't be necessary. In a sane political party, it wouldn't be an item of controversy.
But we don't live in a sane world, and Jon Huntsman, who expressed those sentiments a couple of weeks ago via Twitter, doesn't belong to a sane political party. He's running for the GOP presidential nomination, a race in which being a member of the reality-based community is an actual handicap.
You know, if he had a chance of getting the nomination, Barack Obama might have something to worry about in Jon Huntsman. He's smart, articulate and fiscally conservative, and he's got some serious credentials, as well as good hair. Not as good as Romney's, but still very presidential hair. 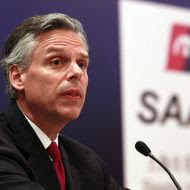 He's also worked in the Obama administration as ambassador to China, which would certainly cut the legs out from under any attempt by the president to attack Huntsman's judgment and/or character. ("Well, Mr. President, if he's that much of a boob, why'd you hire him?")
Fortunately for the president, however, Huntsman is far too rational for the Teahadist fanatics who can be counted upon to swarm the early primaries. They don't want to hear anything about no fancy science stuff or any of that "bipartisanship." They'd rather chow down on the sort of red meat served up all fresh and bloody by demagogues like Rick Perry and Michele Bachmann.
In an interview with ABC's Jake Tapper, Huntsman stated that he didn't think that calling Fed Chairman Ben Bernanke "traitorous" made Perry sound "serious" on the issues. In the same interview, Huntsman also criticized Bachmann and other wingnuts for their willingness to allow this country to default on its debts.
Huntsman was, on both counts, completely correct. He is, therefore, completely doomed.
I mean, really. Trust scientists? Why should we, as good Americans, give any credibility at all to people who actually make a career out of studying an issue, like the 98 percent of the scientists actually working in the field of climate science who believe in man-made climate change?
Why believe in the clear empirical evidence, including striking photo after striking photo of glaciers and icecaps retreating? 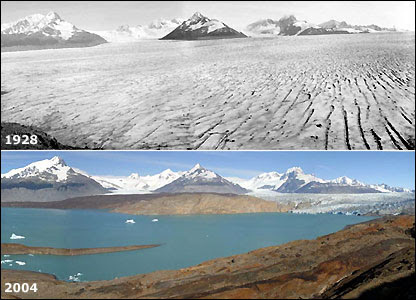 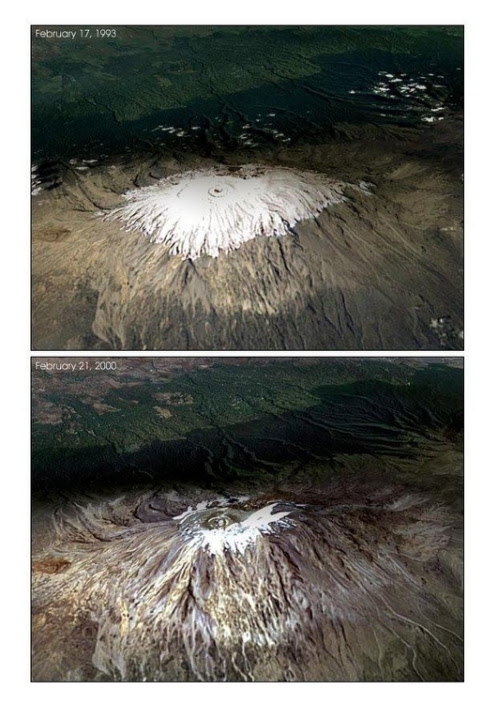 In the words of the guy who got caught in bed with another woman by his wife: "Who you gonna believe, honey, me or your lyin' eyes?"


Trying to reverse or even slow down the clear damage being done to the environment would be hard. It might be expensive. It might even, horror of horrors, cut into the profits of the oil companies, reducing said profits from "totally inconceivable by the brain of man" to merely "mind-boggling."
Why go through all that when you can just wave a hand, say a few magic words ("Al Gore owns a big house!" or "It snowed last winter!"), and make all those uncomfortable facts disappear from the minds of your loyal followers so they'll pose no threat to your corporate donors?
Or, if you're a Texas-size con man like Rick Perry, you can just make stuff up, like his claim that a "substantial number of scientists" were found to have been "manipulating their data." The truth is, a half-dozen scientists were accused, based on eight emails hacked and stolen from their computers. There were five separate investigations. All found no evidence of wrongdoing or data manipulation.
You can look it up. But why would any Republican candidate bother to do that? The truth doesn't set you free in the GOP, unless what you want to be free from is any chance of surviving Iowa, New Hampshire and South Carolina.
Mitt Romney certainly saw the writing on the wall. After saying back in June when he announced his candidacy that he favored reduction of "greenhouse gases that might be significant contributors" to climate change, Mitt saw Rick Perry take the lead and did one of those deft backflips for which he is so justly famed. He now says he's an agnostic on the matter:
"Do I think the world's getting hotter? Yeah, I don't know that, but I think that it is," he said. "I don't know if it's mostly caused by humans. What I'm not willing to do is spend trillions of dollars on something I don't know the answer to."
Jon Huntsman is a sane, reasonable moderate who believes in science. Which is why he's a dead man walking in the GOP. And that's why President Obama, for all his faults, is going to win a second term.
Posted by JD Rhoades at Sunday, August 28, 2011 17 comments