America? I Don't Love It

OK. On this Memorial Day weekend, I have a confession to make. I really don’t care much for America.


Oh, no, not the country. I still love America, the country, a lot. I’ve gone back and forth a few times on America, the band, although I’ll always have a soft spot in my heart for that “Sister Golden Hair” song.
But America, the beer? Not so much.
If you’re unsure what I’m talking about, Anheuser Busch recently announced that, for the upcoming summer, they’re changing the name of Budweiser beer to “America.”
Now, it should be noted that back in the glorious days of my misspent youth, I did drink Bud. I drank a lot of Bud.
On one beach trip, during a period when all the preppy girls were sporting those cute little “add-a-bead” necklaces, I strung a bunch of Budweiser bottle caps on a leather thong around my neck and told everyone it was an “add-a-Bud” necklace. This was widely regarded as hilarious, but only by people who were also drinking a lot of Bud.
In college, I switched to Stroh’s for a long time, but only because my favorite bar offered a 32-ounce cup of the stuff for a dollar.
There’s nothing that builds brand loyalty in a college student like enabling him to get blissfully hammered, play the Stones and George Jones on the jukebox (it wasn’t just cheap beer that made it an awesome bar), and have change left over at the end of the night from a five dollar bill. Good times.
But as the Good Book says, eventually you put away childish things. In the ’90s, beer choices exploded like a can of brewski left too long in the freezer. “Craft” beer became a thing that people talked about, admittedly sometimes to the point of absurdity.
Some discussed beer in the same sort of highfalutin’ terms we’ve come to expect from wine connoisseurs: “It’s a presumptuous little domestic brew that provides subtle notes of clove cigarettes, vinyl siding and motor oil, with a clean finish reminiscent of the 2013 batch of Lemon Pledge.”
Whatever, dude. Whose round is it?
All pretentiousness aside, the fact is that beer choices have gotten a lot better. Beer drinkers can actually find a brand with some taste to it, some personality. So, with all those choices out there, Anheuser-Busch apparently felt that it needed to do something to make its watery, bland flagship brew stand out. What better way for a beer made by a Dutch-owned company to stand out than by renaming it “America” and redesigning the already red, white and blue can to include an insignia that says “U.S.” and an “E Pluribus Unum” banner? 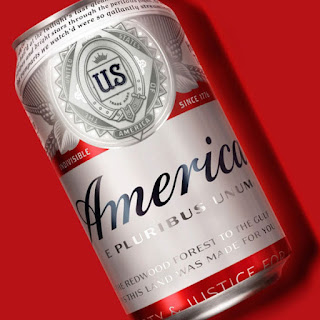 Wait. There’s no “In God We Trust”? Do those tulip-sniffing social democratic Dutch atheists hate God? Bill O’Reilly needs to get right on this.
The rebranding raises other questions. Since the can redesign makes it look like even more like a flag, will it be considered flag desecration to crumple it up and throw it in the garbage when empty?
Am I going to need to stand up off the bar stool and put my hand over my heart when the barkeep puts a tray full of them up on the bar? Will there be an “America Lite,” or will they just call the light version “Canada”?
When Donald Trump says he’s going to “make America great again,” does this mean he’s going to do something to make Bud taste like something other than weak battery acid?
Ah, well, it’s all moot. I’ll continue to drink good American beers, made in America, by Americans. Like Fat Tire, out of Fort Collins, Colo.; Shiner Bock, out of Shiner, Texas; and our own locally made brews, like the wonderfully named Man of Law, from Southern Pines Brewery. And Railhouse English Ale, from down Aberdeen way.
(If I missed any local or N.C. breweries that I should have mentioned, then please feel free to educate me, preferably with a cold draft in a frosted mug.)
God bless them all, and God bless America (the country).
Posted by JD Rhoades at Monday, May 30, 2016 2 comments